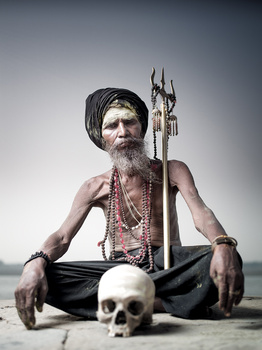 hey believe that one who hates cannot meditate. Sharing food with dogs and cows does not sound repulsive to them, rather it is how they eat their meals - alongside the animals which frequent cremation grounds, out of the same bowl. It is their belief that if they were to start worrying about insignificant things like animals dirtying their food, they would not be able to focus on their higher aims of meditating and becoming one with Lord Shiva.Aghoris have another very specific and highly secretive ritual for sexual intercourse. The ritual explains that sex in the midst of the dead can give rise to supernatural powers. In the dead of the night, in a graveyard, amidst the strewn ashes of the cremated, the Aghori clans unite to perform this ritual. The women involved in this act are smeared with the ashes of a departed, and the consummation is carried out along the beats of drums and recitation of mantras. It is imperative that the women have to be menstruating while the act is going on, and they cannot be involved in the act by force. The process of coitus is carried on for the greater part of an hour, and the men cannot complete their orgasm until the whole ritual is over. Taking the form of Shiva and Shakti, the men and women perform this act in a strange methodical state of trance, releasing sexual energy in the form of supernatural powers.