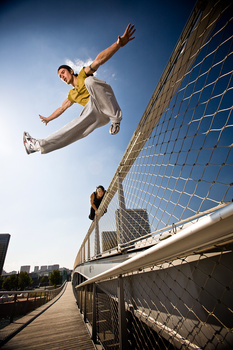 One of the many bridges that cross the Seine river, running through central Paris. Stephane is one of the originators of parkour, having trained for more than 20 years.

The day's shooting was very much improvised and partly unexpected. We were just hanging out in Paris and training when Stephane asked if we could get some shots. On a footbridge across the Seine, I found a railing that I thought could work. Using a small speedlight, I managed to balance the intense, mid-afternoon sun and hopefully give the impression of a much bigger lighting set-up. In less than 15 minutes we had moved on as spending any time with a camera and a strobe on a Parisian bridge tends to draw some unwanted attention..!

Sick image! Very dynamic and the lines are just wow!