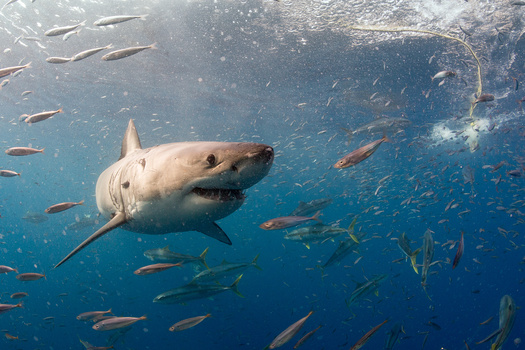 A great white shark, just below the surface, after going after the bait used to attract sharks on a shark-cage diving vessel. This was photographed from a "surface cage", accessible by climbing in directly off the boat, with an excellent position to get a close-up shot of these magnificent creatures.

The image was photographed with a Canon 15mm fisheye lens which makes the shark appear as if it is a LOT farther from my camera than it actually is. In fact, shortly after this was photographed, the shark got SO CLOSE to the cage that its pectoral fin lightly brushed up against my GoPro camera housing! I wasn't aware that this happened until watching the GoPro footage on my computer. We take great measures to make sure that the sharks are not touched while in the cages, but I guess sometimes they don't know their own size. :)