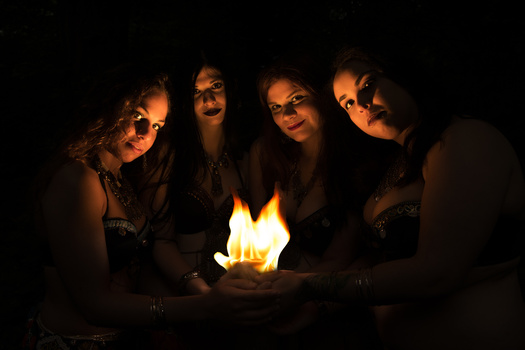 Winds of the Moon Belly Dancers

So I had this idea for a shot for Winds of the Moon Belly Dance Troop's photo shoot that we did on June 3rd, 2018. I wanted all four dancers to be around a flame coming from their hands surrounded by darkness. I had a couple of problems. One was that we were shooting in the bright afternoon sun in a busy park in Stony Brook New York, not a dark studio. The other was skin burns when holding fire (funny that).

So I decided to use a Canon 430ex II speedlite on a Phottix Odin wireless remote set to High Speed Sync with a CTO gel for the light coming from their hands.

I upped my shutter speed to 1/1000 of a second to kill all the ambient light from the sun, allowing the only light in the photo to be from the flash (which isn't affected by the shutter speed). I posed them so they all had the flash covered with their hands in the front as best as we could get it.

In post I took a shot of a flame I took a couple years ago just for this sort of occasion (I like to take my own stock photo for future use) and composited in over where the flash was in their hands.