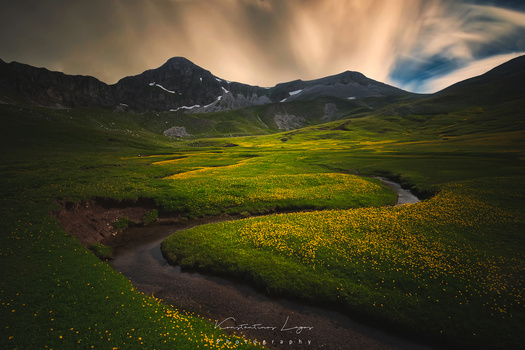 According to the mythology at the top of Mt Peristeri on Pindos, three brothers lived there in harmony. The serious Arachthos, the beautiful Salavria (Pineios) and the untamed Aspros (Acheloos). One night Salavria, as their brothers were sleeping went downhill secretly to the plain to meet someone of the Olympus Gods. But in vain. Disappointed as she was, she moved towards the neighboring sea and she was drowned. When Aspros realized that Salavria was missing, he was worried and impulsive as he was, he slumped without a second thought the mountains, searching for his sister. Arachthos was worried for his brother and sister that were missing and he started to walk around the Epirus to find them. When he realized that he had definitely lost his brother and sister, he fell into the Ionian Sea and he was drowned. So this fantastic place was created.

Thanks a lot for your visit