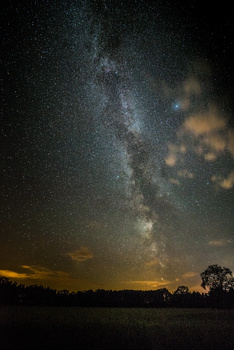 On the 10th of August, a clear night + visible center of the milky way + very late moonrise was on schedule for the north-eastern part of Germany, so we headed out to one of the desginated "star parks", areas with little light pollution. This one is located north-west of Berlin.

This was only my second attempt at astrophotography. I used a Rokinon 14mm 2.8 prime lense.