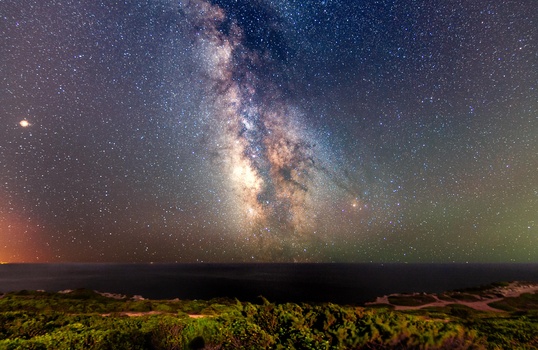 This photo has the particularity of, in addition to having the Milky Way as the main element of the photo, it is possible to glimpse tenuous colored bands in shades of green, blue and red in the night sky. This is not an anomaly of the machine or of the post-processing, it is a phenomenon called airglow consisting of the emission of light at the respective wavelengths by free atoms in the high atmosphere through reaction between them either by the rearrangement of atoms previously ionized by sunlight during the day, either by the reaction of oxygen and nitrogen atoms with hydroxyl ions, or by the impact of cosmic radiation on atmospheric discharge (in this case, resembling in part to the phenomenon that produces the beautiful boreal auroras).
Under certain conditions we can have a sky that goes far beyond the black of the deep sky or the yellowish light pollution caused by the usual urban lighting of the sodium vapor lamps, and you can see what we could call a true rainbow, would go nocturnal.