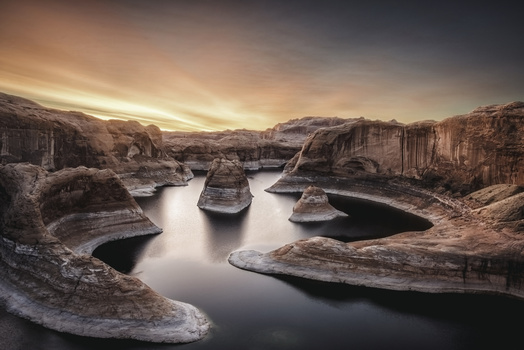 So that’s it. I did it. Drove on the roughest road over a mountain pass ever in a 4x4. Some perspective...It took me 4.5 hours to drive 170km. Then a 14KM hike through the desert. Over rocks, hills and slot canyons. Through sand, brush and cactus, with around 15kgs of camera gear, food, water, clothing and a tent. 5 hours later I reached it. Safe and with enough time to set up my tent before sundown. Spending the night alone in the desert with nobody near for the bones of 100km. I didn't see anybody for the best part of two days. No phone, no distraction bar my exhaustion.

It is something I thought I would never do alone, but I did. I pushed through my limits and self doubt and accomplished something I will remember forever. I made it to Reflection Canyon. Slept(rather poorly) overnight and then hiked 15km back out and drove 400km back to my start point. I decided not to take the dirt road back as I was shaken and sore(they both take the same amount of time ironically enough). Didn’t need more of that lol.

With all that, to see this place finally in person. To be in its presence is something no camera can ever live up to. The sheer enormity of the rock is only best viewed in real life as the scale is not justified through pixels. Anyway here’s a shot. I hope you can see its appeal and immenseness. Such an amazing and humbling way to end an incredible journey. It has shown me the world in a different way. It's vastness and immense structures have shown me that we are only tourists on this planet. These giants are the permanent residents. Get out there! Go see! Go explore! Before your passports expire!

Sounds like one hell of a journey! The blue of the water is a very satisfying contrast with the red rock. Glad you made it Gary :)

Thank you so much Daniel! It was quiet the adventure. Worth every aching step.

wonderful shot and thanks for sharing the fantastic story behind it!