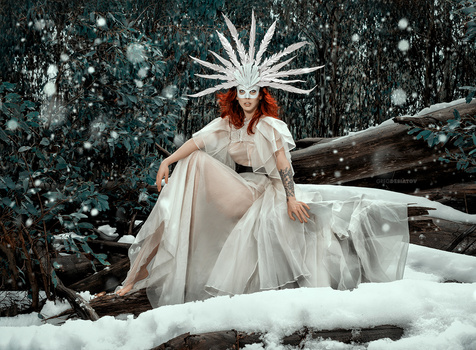 We were very fortunate with this shoot that we had some fresh snow overnight as this season has been quite a shocker from the lack of snow.

This was shot at Lake Mountain in Victoria, Australia which is about 90min from Melbourne.

It was an amazing day with blue skies and no wind so by the time we arrived, some of the fresh snow had melted. Lucky for us, the location was still wonderful.

This shoot was really quite a small shoot with just the model, assistant and myself. Abby wanted to do a shoot in the snow so I threw a few things together for the shoot.

I re-purposed an old mask that I had made years ago and grabbed a white dress that I had on loan from a designer. Unfortunately for Abby, the dress was a summer couture gown so it gave her little to no shielding from the cold air but, she did the whole shoot without a single complaint.

For the lighting, I used a 1.2m octagonal softbox on a Godox QT-600 studio strobe powered by the Godox LP800x Power Inverter. This light was placed to the left and adjusted high and down about a 45° angle.

The final image is a composite of 3 different images. I loved the body pose in the original but the position and expression wasn't that great. I use her head from another image and then added more fabric from yet another image to the right side.

As much as I love this setup when I shoot editorials, it's a bit cumbersome to use for a small shoot amongst the forest. Since this shoot, I have purchased a Godox AD600 just to make my life a touch easier with these smaller shoots.

Your model did a great job. She doesn't look cold!!

Thanks Jon. She did a great job