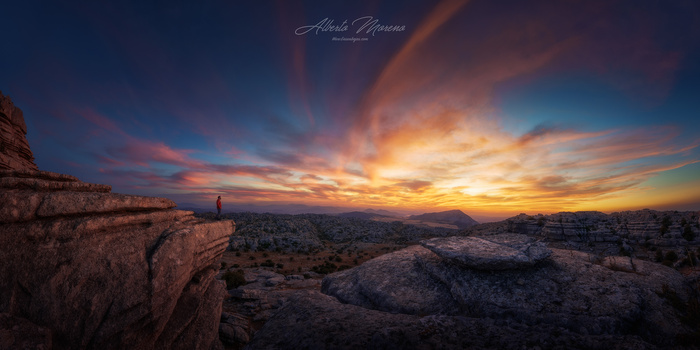 What was going to be a night of clear skies, or so I saw in the parties the day before. It became a sunset of those who had never caught me in the torcal.
From the road I had to stop to see if the prediction parts had changed and indeed high clouds were coming. When I arrived at the parking lot, I hurried to mount the equipment on my back, since I still had 40 minutes of walking and I expected that I would arrive just.

Indeed, I arrived I placed the timelapse with a camera, adjust the running times and the movement I wanted it to do ... without losing sight of the sky. When I duck for the other chamber and look up ... the sky burned in flames ... literal. I took the tripod and ran to the rocks behind me that I already knew from the last sunset ... I mounted the tripod I did the pano ... and in one of the photos I placed myself ... needing about two minutes to run and jump doing the It will fit to that point ... one afternoon that I will not forget not because of the photos ... but because of how well I had a good time dancing like a damn local goat. The best ... the best came later and I leave it for another post.