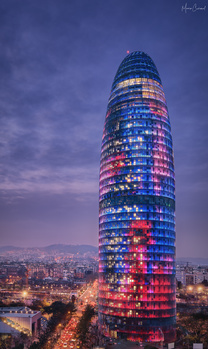 I had some difficulties to find an interesting angle of view to capture this rather "boring" piece of architecture in some interesting context......shortly before giving up, I came up with the idea to give it a try from the hotel roof while on a layover in Barcelona a couple of weeks ago...unfortunately, there was a pool between me and the ledge, so I could not get more of the base of the building into the frame.
I captured that image at a late blue hour, waiting for the colorful skyscraper lights to turn on......unfortunately that happened too late, when the sky was already dark. The solution at the end, was to blend in the skyscraper lights into my blue hour shot.