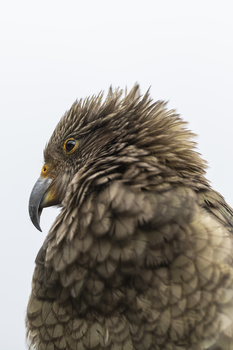 The kea is a species of large parrot in the family Nestoridae found in the forested and alpine regions of the South Island of New Zealand. About 48 cm (19 in) long, it is mostly olive-green with a brilliant orange under its wings and has a large, narrow, curved, grey-brown upper beak. The kea is the world's only alpine parrot. Its omnivorous diet includes carrion, but consists mainly of roots, leaves, berries, nectar, and insects. Now uncommon, the kea was once killed for bounty due to concerns by the sheep-farming community that it attacked livestock, especially sheep. In 1986, it received full protection under the Wildlife Act.

Such an intelligent bird also