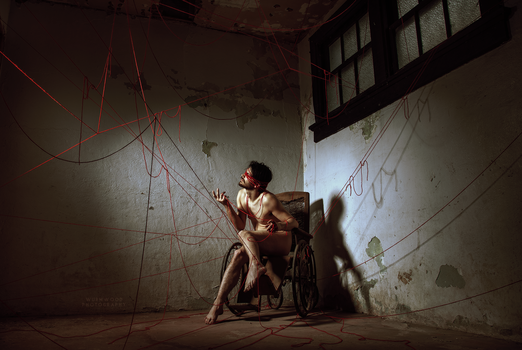 “The things that I loved were very frail. Very fragile.
I didn't know that. I thought they were indestructible.
They weren't.”

The Meaning:
The red strings represent connections to the outside world. The image is meant to convey a sense of hopelessness. Note that the windows aren't see-through, and even if they were they are too high up to see out of. The wheelchair represents a feeling being stuck in place, but his body pose suggests he doesn't even need the wheelchair. So why would one elect to sit when they could stand? Because they don't know how or they simply don't want to. But we don't actually know if he needs the wheelchair or not, all we know is that he isn't standing. That's kind of a nod at the fact that when we see people struggling sometimes we see that they need help and offer it and other times we blame their problems on them and expect them to pull themselves back up all alone.
The tangles in the strings stand for a tangled web of interactions. Lies that made connections hard to keep, uncorrected mistakes that pushed people away, wrong steps that ruined our plans and goals, trauma that we've experienced that made life difficult, etc. Some of the strings are broken and unrepairable. There's no going back to the way things were with certain people and situations, but some strings are still very much intact, although tangled.
He's so erratic in his desperation to connect with these outside sources that he's pulled and tugged some strings until they've broken, and he's accidentally blinded himself with all the mess, which makes it even harder to follow the strings that are still intact. He never stood up and followed the strings, he simply tried to pull the connections to where he was. And in desperation, he clings to the strings, constantly tugging and breaking new strings because he's lost and confused and repeating his same mistakes over and over.
The photo is meant to depict the fragility of human connections, life, and our psyche. Where our self-destructive habits keep us locked in place and where some of us are too blind to save ourselves or see what we are doing to ourselves and others. And even though we know we still have people who love us and potential to fulfil (unbroken strings), they seem unobtainable with the course we're currently on. It can also mean, for some people, the inability to find connections because of mental illness or some other life factor that makes it difficult to lead a normal life, not just our conscious choices. It could be trauma that made the blindfold instead of mistakes you've made.
The fact that he's naked is a vulnerability play, a cry for help. Because he's open to help, and with help he could navigate these strings. The decayed and dirty room is meant to suggest that he's been there for a very long time, and the lack of light from the edges of frame stand for uncertainty and the unknown.
The photo represents isolation, depression, loneliness, hopelessness, and the unending desire for that to all go away and for our lives to flourish.

This is perfection!!! LOVE LOVE LOVE

You put so much thought into this photo. Amazing. 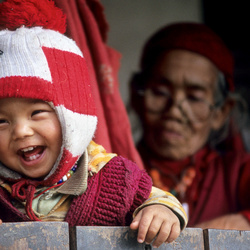 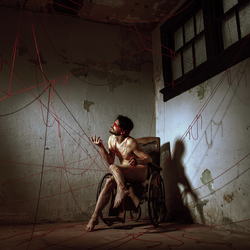 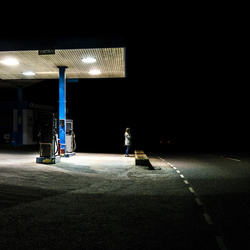