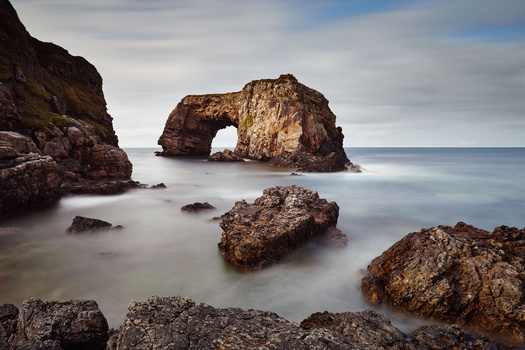 After visiting and shooting the Fanad Lighthouse in Northern Ireland, we decided to try to find this amazing arch. We drove around for a while, not sure if we were even in the right area after getting directions from some local farmers. We took a chance and headed down this narrow country road, which ended at a gate leading to farm fields on a very hilly slope. My friend was not in great shape so I decided to head down a bit toward what I thought was the water. As I came clower to the shoreline, I noticed what I thought could be the top of the arch, but it was hard to tell. So I went down almost all the way through this remote field, and sure enough there it was. I felt bad for my friend as I know he wanted to shoot this as well. so I headed up close enough to yell to him and he could hear. He waved me on as it had been a long day, and he kept our wives company. When he saw the shots I got he was kicking himself. I shot by the arch for around an hour as it was a bit overcast (Irish weather!), but I managed to get some light on this arch before I left. While some of the arch was in shadow, I was still happy with the result of this particular image. I estimated this arch to be about 50 feel high. I started shooting faster exposures, but then once I settled in, I decided to shoot long exposures, which simplified the composition. The waves were hitting the foreground rocks pretty good, and spray hit my lens a number of times, but this did not deter me as I kept thinking, "When will I be back?" I would go back to Ireland in a hearbeat.