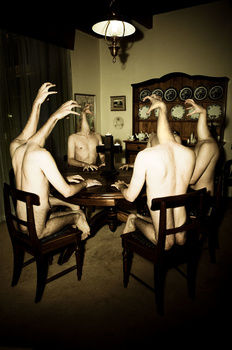 Fred, congratulations on producing a truly weird image! And, I say that with the utmost respect and appreciation. That being said with this image I believe that the viewer deserves some explanation. What'a the meaning / editorial message that you're trying to express? What was the inspiration that led you to conceive this image?

Unfortunately, most viewers on this site will simply pass it over without giving it a moment to take in and appreciate the creativity that clearly went into it's creation. They likely won't ponder the many subtleties contained within.

And, if the Fstoppers crew were to critique it, it would surely earn one or more of their three standard responses for images that don't fit their narrow definition of "mainstream" commercial photography. e.g.
1). Where would it be commercially viable?
2). Would you put it in your portfolio?
3). I think that there's some "funny business" going on with post on this image!

Clearly this image is going to appeal / be valuable to a very limited audience. It's not my cup of tea with respect to hanging it on my wall and, some people would exhibit it as a piece of fine art. I can also see it as a bottle label for a company that produces tequila or mezcal. With the cross in the center of the table being replaced by the actual bottle with the label, it would then fit as a, if somewhat quirky, take off on dia de muertos (day of the dead). That's a theme that would fit with those products perhaps.

Kudos on stretching the limits on this site!