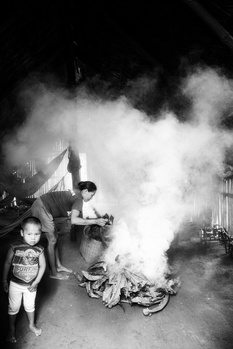 Mambe is a coca powder that has been used in most of the indigenous cultures in the Amazon and Andes as a stimulant to resist in the long periods of hard working.
In the western Amazon, the leaves of Erythroxylum coca are dried by toasting over a slow fire in special ceramic bowls or pans. The leaves are toasted to dryness, then reduced to a fine powder by pounding in a special mortar and pestle, followed by careful sifting. All coca varieties are distinctly bitter because of the presence of alkaloids. This bitterness is counteracted by the addition of an alkali substance such as the ashes of Cecropia sp. trees, in the case of the Amazonian tribes.
The stimulation experienced during coca chewing gives a sense of increased energy and strength, mental sharpness, an elevation of mood and mild euphoria, and a sense of well-being and contentment.