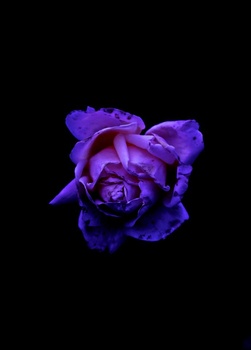 Planète à Volants is part of a photographic series I called CELESTIAL SPHERES. There is a universal thread that connects everything. If humans and all other planetary objects, including flowers and leaves (the focus of this series) are built of star-stuff, then from the viewpoint of universal cohesion, stars are built of roses. And indeed, the birth of a galaxy looks much like the blooming of a rose. Roses, and the other florae, exist in this celestial realm—where the flower is the primary source of energy and light. No longer are roses solar-powered—suns are ROSE-POWERED. The process of photosynthesis—by which plants thrive via their internal solar batteries called chlorophyll— becomes the process of florasynthesis: Flowers power the galaxy. For me, the fact that we are connected to these celestial spheres serves as a constant reminder that we cannot neglect our duty to serve and maintain our environment—humans being nothing more than walking, thinking florae, riding an enormous spaceship in a galaxy built of shining, blooming and/or decaying roses.

Leïla B
Planet I
0