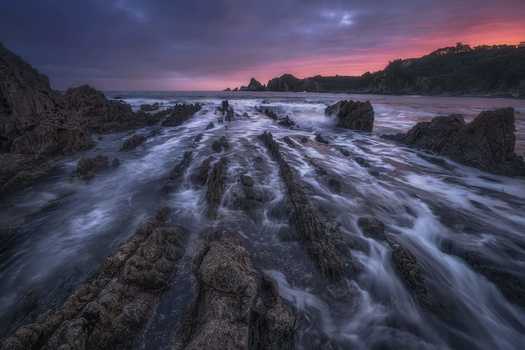 The clock strikes 6 am, Spanish time! Already geared for a new exploration towards the unknown, I decide to start the descent to Gueirua beach, one of the ones that most aroused my curiosity and excitement along the Asturian coast.

It was already the 5th day of ascending and descending with a loaded backpack on my back and my body began to gradually accuse the weariness of so many steep incursions and the many kilometers already carried by my legs. The desire and passion for photography helped countering the effects of the fatigue !

I knew that in order to live and photograph the experience of being in this place in all its glory, it was necessary that the visit was made at low tide, which had already been planned beforehand.

After about 1.5 km of walking on a very steep descent, I finally arrive at the place, still emerged in total darkness as the sun would not rise until around 8.30.

With the help of the flashlight I venture among the rugged rocks of imposing dimension, jumping from puddle to puddle and trying to keep my balance to avoid taking any false steps. It was not more than half an hour before I ended up in a deeper puddle and had water inside my boots. It doesn't matter, I thought, at least I won't be worried anymore about not getting my feet wet and I can focus 100% on the essential!

The truth is that by this time I was already completely dazzled with all the surrounding scenery and despite not yet seeing any glimpse of dawn on the horizon I already had a good idea of ​​the magnificence of this landscape. Of so many places that I had the privilege to visit I had never seen anything that resembled this morphology and geology, so raw and so primal !

I sat on the top of the highest rocks for several times, contemplating the moment and letting my senses absorb the intense aroma of the sea, the night breeze, the sound of the sea echoing between rocks and sometimes just the silence of the night.

Without any hurry for the sunrise to arrive, I kept enjoying every instant until the moment that had led me there was finally near.

This was not just another sunrise but an entire crescendo that had culminated in an unforgettable dawn that I will always take with me !

My goal with this image was to put focus on the central area where we can see the mountain peaks, highlighting the dynamic movement of the water and using a short/medium exposure of 1.5 seconds to freeze it smoothly, which in addition to reinforcing the visual guide lines allows to convey more movement and intensity in a landscape that intends to be dramatic and intense in order to express what I felt at the place.

In terms of composition techniques, I used the notion of geometric figures with the triangle formed by the central zone to the foreground as well as the orientation of visual guide lines.

I used a quite different framing from the usual on this beach and started on the opposite side of what is photographed by everyone, since I consider this to be one of those privileged places where we can fully explore our creativity and a multitude of compositions without the risk of repeating what has already been done by everyone else .