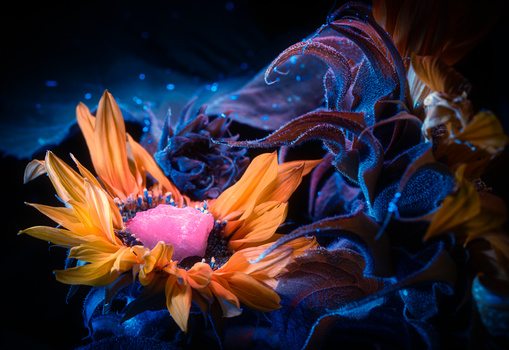 I have been experimenting with ultraviolet light sources and modified two of my off-camera flashes with filters that only emit UV light. I had the idea to place this mineral Cerrusite which fluoresces under UV on a Sunflower, which also fluoresces under UV light. It is one plant with multiple heads, I laid it down in the garage as it was in a moveable pot. Initially I placed the mineral on the largest head, but this produced a fairly uninteresting composition, so I placed it on the medium sized head and re-positioned the smaller closed head behind it.

To me it appears as though these spikey parts of the plant are creatures that are coveting the precious gem which is in the possession of the flowering head it is sat on.

The image was achieved with the following settings 30s, f/11, ISO 320, the two flashes were at full power and fired as quickly as they could recycle over the 30 second period, so I estimate this to be about 8 times each. Interestingly Cerrusite should fluoresce a yellow hue when exposed to UV, however the UV pass filters that were used on the flashes do allow some Infrared light through, so I suspect that the IR may be causing the pinkish glow, or it is not really Cerrusite. Colours have been tweaked and dust (bright blue) removed, some I left in because I like how it appears.

Thats an amazing shot and sounds super interesting to do. Looks like you've been out on a photo trip on another planet. Really like it. Well done!