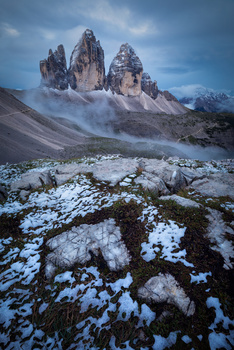 Late summer, we hiked around these three peaks, a symbol of Dolomites UNESCO World Heritage Site. The weather was pleasant and sunny all day; most of the hikers were wearing a T-shirt. Suddenly it started to rain. Rain turned in hail and later snow! The Refuge in the area had a free room, so we decided to stay overnight. We walked out in the morning, and I instantly spotted these heart-shaped rocks, and as the fog was rolling from the valley below, I captured this image of the first snow! I captured this shot from a low angle, allowing me to keep the three peaks and the two hearts in one frame. I used focus stacking to keep the front to back sharpness of the image.