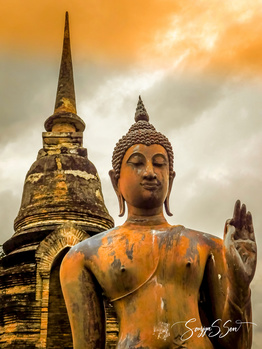 “What you think, you become. What you feel, you attract. What you imagine, you create.” - popular Buddhism quote.

Depicted here is the top-half of a very rare "Walking Buddha" statue. Most Buddha images throughout Asia are in one of three postures: standing, sitting or lying down. The creation of a walking Buddha image is a distinctive feature of Thai art in the thirteenth century.
Earlier Buddhist art had stressed the god-like and king-like aspects of the Buddha, and neither gods nor kings were imagined as a walking monk. Thai images presented a new image of the Buddha walking among the people emphasizing his earthly aspects.