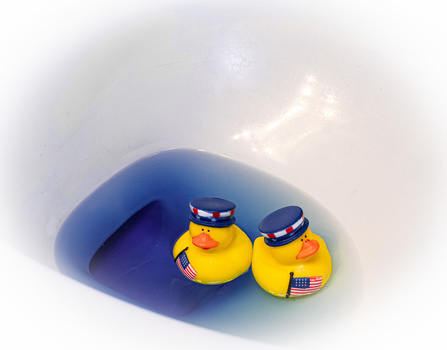 Robert, this lake looks smaller than I remember

Two rubber duckies floating in a toilet bowl. Ya, I know this one I kinda weird. I had the duckies, and I was going to use them in the tub somehow. But right next to the tub was ... you guessed it, the toilet.

During this shoot, I learned that blue food coloring is really difficult to remove, and it takes days. The top leaked and ran down my fingers.

I wanted to have them swirling during a flush, but it didn’t come out the way I wanted it to. And I chickened out. I had fishing line attached to them, and I was afraid it would break or pull off the ducks. I could picture telling my wife I clogged the toilet with a rubber duck; it wasn’t a pretty picture so that idea went by the wayside.

As a side note, the American theme was just coincidence - there’s no symbolism behind it. I had destroyed all my plain ducks it other shoots. These were all I had left from the 4th of July. I’m very impatient so I didn’t want to wait to get more ducks.