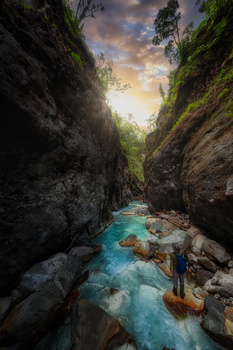 Somewhere in the forests of Negros Occidental lies a unique natural wonder. It is simply called “The Sulfur River” by the locals which is a big giveaway as to why the waters running between boulders have that distinctive blue hue and the rocks surrounding the waters have the orange shade. Witnessing this spectacle will leave you in awe and wonder over the power of Nature slowly shaping itself over a span of time that is often on the scale of centuries. The boulders were shaped by both running water as well as the various tremors caused by magma activity since this area is right in the foothills of an active volcano.