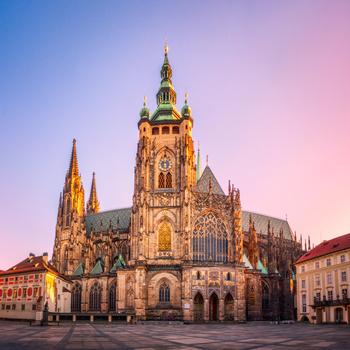 Cathedral of Saints Vitus, Wenceslas, and Adalbert in Prague, the Czech Republic/Czechia

On the site of today's St Vitus Cathedral previously stood two other churches with the same patron saint. The first church was built in 930.

If Wikipedia is to be believed, the founder of this first church, Wenceslas I the Saint, chose Saint Vitus as a patron for a reason. The Duke of Bohemia wanted to convert his people to Christianity. Saint Vit in Czech (Svatý Vít) sounds almost identical to the name of the pagan deity of the Slavs of the area, 'Svantevit'.

What do you think of this story of the name of St Vitus Cathedral? Do you find it plausible?