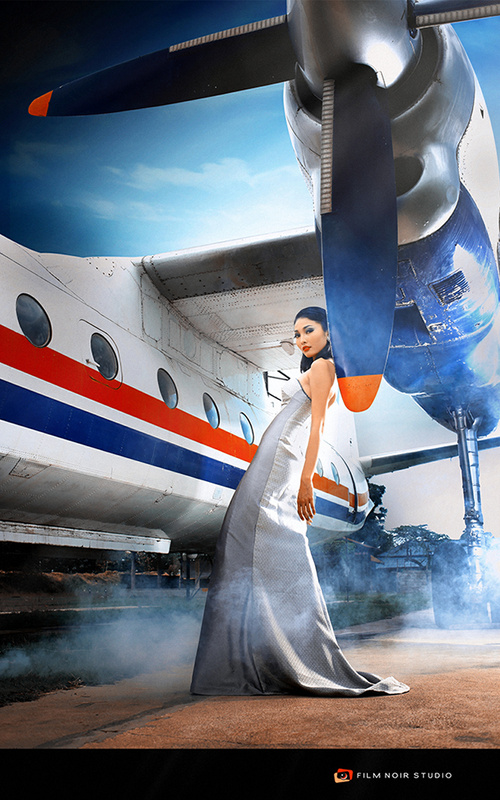 In December 2014 I was booked by The Man Magazine in Phnom Penh Cambodia to do an editorial shoot
with Eric Raisina's clothing (Top Fashion Designer in Cambodia) and Top Model Soriyan Hang
at a Military base on the outskirts of the City. Concept was to have a large commercial airplane as a key element in the shots. I used 2 lights (Jinbei 400) , one very strong rim light in the back to give a dramatic effect (with back light coming in the same direction as the perspective of the plane in the composition) and one softer light in front to add some fill. The smoke was created on site with a smoke machine. Nothing has been added in photoshop, only editing for colors, contrast etc. I use a Canon 6D camera with a 35mm f2 (I never use 35mm for fashion but here I wanted to give a dramatic effect with the size of the plane). My Settings were: f/7.1 1/160 ISO 200.

That was an interesting experience to shoot at the Special Forces headquarters in PP, the whole place is like a little museum, with lots of gear on display and lots of training areas for paratroopers, including proper shooting range.

I'm a French art director & photographer, I grew up in France but also Morocco,Ivory Coast and have been based in SE Asia for the last 10 years.
I worked for a fashion website in Paris before moving to a career in graphic design and advertising in SE Asia.
I started my own business Film Noir Studio in 2012 and rapidly became one of the leading events, advertising and fashion photographers in Phnom Penh. I started photography in 1991 and am a Bachelor of Arts. 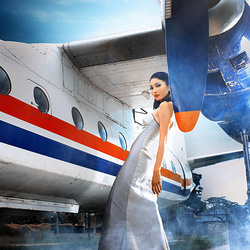