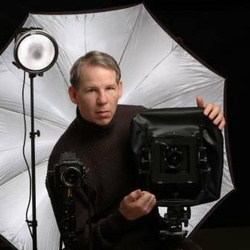 William Cornett has Bachelor's Degree in Fine Art Photography from UMBC. He started working in his father's darkroom at age 11, and before he could drive he was photographing assignments for local newspapers.

His publication credits range from National Geographic World Magazine to Baltimore Magazine*, The Washington Post*, American Heritage Magazine, Time, Newsweek, and dozens of other publications worldwide. His images have been featured in Life Magazine's The Year In Pictures, and his cover for Maryland Magazine won a bronze Ozzie Award from the National Art Directors Association for "Best Magazine Cover of the Year." *Indicates a publication Mr. Cornett has also written for.

Mr. Cornett is considered one of the premier headshot photographers in the DC area, and his commercial clients run the gamut from local governments to Fortune 500 companies.

Mr. Cornett has produced video for every major broadcast television station in the Washington DC area, as well as promotional videos for local government consortiums and businesses. Writing under a pseudonym, he is a published author in the Science Fiction and Action/Adventure genres. He is also a songwriter and performer.