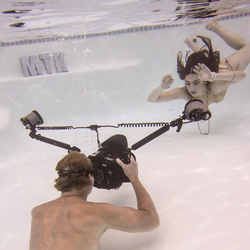 Harry is a two-time Emmy award winning TV journalist. He most recently he anchored The 10 O'Clock News at My9 (WWOR), and The 6 PM News on Fox 5 New York (WNYW). Before joining Fox News in 1997, Harry anchored Eyewitness News This Morning and Eyewitness News at Noon on WABC-TV in New York.

Harry began his career in broadcasting as a news photographer, shooting 16 mm film and then some of the first video tape in the TV news industry. He continues to follow his passion for photography today, self- publishing more than a half dozen travel photography books: (Kenya, The Galapagos, Italy, Greece, and London).

Harry's newest project, "Harry Martin Underwater" combines his unique skills of street photography and love of underwater photography into a new genre, Underwater Glam & Fashion. As a pre-med student, Harry graduated from Albright College with a degree in psychology and biology. He is a recipient of the college's Distinguished Alumni Award.

Throughout his 40 year career in broadcasting he kept shooting. He's reported on every presidential race since Jimmy Carter. George H.W. Bush once told Harry that he would never run for President of the United States. Harry reported on then-Senator Barack Obama's stepping into the national spotlight in Boston in 2004, and reported on Obama's nomination in the Presidential campaigns of 2008 & 2012.

Throughout his career in front of the camera, he continued to chronicle news events with his still photography.