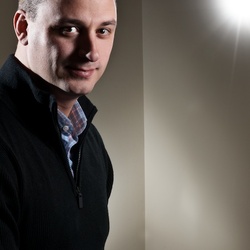 With a formal training and education in theatrical lighting design, Daniel Swalec stumbled on photography while on the road. After leaving a world tour with the band Coldplay, he found himself working on the theatrical touring production of Grease with American Idol Taylor Hicks; where he first started to open his theatrical eye to photography. He was helping to realize other lighting designer’s intents on these productions nightly and found himself without an outlet for his own creativity. After un-officially photographing countless images of the Coldplay tour, Daniel started to re-create the look of these images he captured with speed lights and theatrical gels. Throughout the next 6 years, he built his photographic style and began to incorporate his understanding of theatrical lighting into his images.

Daniel continues to work professionally as a photographer for the Broadway world during his time away from EMPAC. He has recently photographed the touring companies of Joseph and the Amazing Technicolor Dreamcoat starring American Idol Alums Diana DeGarmo and Ace Young, as well as the touring company of Priscilla Queen of the Desert prior to their Las Vegas residency in the summer of 2013.

Having relocated to the Capital Region of New York State in early 2013, Daniel and his wife Crystal are now excited to call the Albany area home and are always looking for ways to get involved in their new community