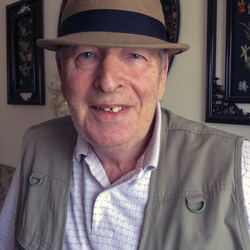 My Name is Harold V Lambourn, Harry For Short, and a senior citizen. I come from a town called Reading in Berkshire, about 35 miles west of London. Ive been doing photography for around 37 years, 27 of them professionally.

My last four years in the British Forces I became a military Photographer. Left the services in 1979 and joined a company called Mid-West-Movies, an Industrial and Commercial Advertising and filming company, this is where you use larger format cameras like the 5x4 Technical Plate Camera, and the 6x6 / 6x7 Roll Film Cameras.

Then in 1981 I got itchy feet and went out to the Middle East Doha-Qatar as a photojournalist for an English and Arabic newspaper, Gulf Times and Arrayah. This is where I Worked for 18 Years and had a great time. I came back to the UK in December 1999. Once back in the UK I could not get a job back in photography. I ended up working a s a team leader in facilities at a hospital in Reading. and it was not until 2002 that I moved over to digital.