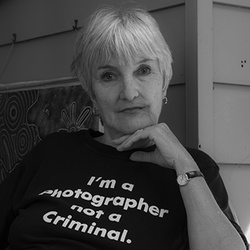 Sheila Smart is a professional photographer whose work has been published both in Australia and overseas. In 2005, she won the prestigious US based Black and White Spider Award Photographer of the Year – amateur, also winning the People category of an image of schoolgirls walking through the Rocks area of Sydney, entitled “Sea of Hats”. She also won the UK based SWPP/BPPA Traditional Portraiture International Society Photographer of the Year 2008 for her portrait of aboriginal street performer, Cedric. Her image of a pink frangipani has appeared on tissue boxes in Australia since 2005. She has also been published in National Geographic Traveler Magazine and her images appeared annually on the front cover of Feminist Media Studies, a publication jointly edited by various United States universities. She has an e-commerce site at Photodeck. She has exhibited her work in the United Kingdom, the US including Soho, New York and California and Australia. Her portfolio of images can be found on her website http://www.sheilasmartphotography.com.au

She lives in the Sydney northern beaches suburb of Avalon with her husband and two cats.