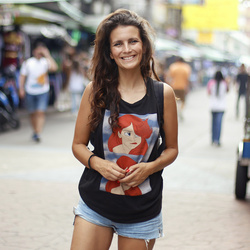 Ana Dias is an internationally published photographer, best known for her nude photo shoots for Playboy.

Ana Dias was born in Oporto, Portugal, in 1984. She graduated from the Higher School of Arts of Oporto in fine arts, specializing in drawing, in 2007. Her background in fine arts led Ana to photography, which came to be her favorite way of artistic expression. Her first photos for international editions of Playboy were published in 2012. Since then, Ana has shot Playboy covers and pictorials in virtually every corner of the globe. You can see her work on the pages of Playboy US and in international editions of the magazine in more than 20 countries, including Germany, Netherlands, France, Italy, Portugal, Russia, Brazil, Mexico, South Africa, Thailand among many others.
Influenced by the pop culture, the scenes captured in her shots are full of color, full of life. They are übersexy and electrifying, but at the same time cheerful and uplifting. Whoever sees her work remembers it.