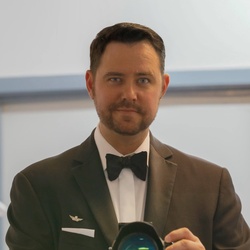 J.R. “Buzz” Covington is an internationally published and award-winning photographer
who brings a wealth of travel experience and a unique perspective to his work. Buzz
began photography as a hobby in junior high, which turned into a passion and a
profession as an adult. During his worldwide travels in the military spanning 25 years,
Buzz has seen and documented some amazing sights.

Buzz spent eight years flying aboard various electronic warfare aircraft in the Navy, and
17 years in the Army as an AH-64D Apache Longbow Instructor Pilot. Now retired from
the military, he enjoys devoting the amount of time and effort to photography as a
professional that the art deserves.

He has worked for the U.S. Olympic Committee (Team USA) in both London and
Sochi, the Combined Services Disabled Ski Team (UK), Reebok, One MR Apparel, and
several other agencies. His work has been featured in Esquire, Cleared Hot, Heli-Ops,
and many news outlets. He is a member of PPA, RPA, and the Washington Arts Club.
Buzz lives with his family and two English Bulldogs in the Washington DC area.