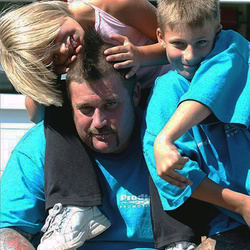 Growing up, all my friends were musicians. I realized, pretty quickly that I wasn't, and if I wanted to continue to hang in that crowd I needed to find something I could do, that they couldn't, but needed. I've always loved, and had a knack for photography and admired the photos of bands I saw in CREEM, Hit Parader and all the music mags. A friend was starting extreme magazine, an International music publication covering the scene in Buffalo, NY and surrounding areas and as far north as Toronto ON, Canada. I started out shooting local bands and when Cannibal Corpse and The Goo Goo Dolls got big it got photos and my name out, which made it much easier to request credentials for literally any band I wanted to shoot. Over the last 20 + years I've shot just about every band I ever wanted to. Eventually I became a contributing photographer to Hit Parader Magazine and have photos on the web sites and CDs of The Goo Goo Dolls, Sick of it All, Cannibal Corpse, Ministry, The Rolling Stones. Deep Purple, Lenny Kravitz and too many other bands and musicians to list, or remember. I still shoot bands now and then, but not nearly as much. These days I'm shooting mostly sports. We travel to Hockey & Soccer Tournaments, photograph the games and make the photos available for the parents to buy when they're done. It's a lotta fun, but also a lotta work. Sometimes the 1st game's at 6:00 A.M. and the last 10:00 P.M. Fri - Sun, which makes for some long days.