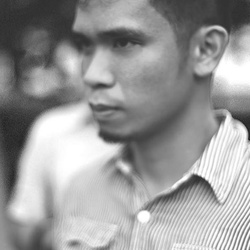 Brewed as a filmmaker in his college years, Joseph “Fade” Longboy, challenged his skills to explore the capacities of his chosen craft as a visual storyteller. Longboy earned his Bachelor of Arts degree in Mass Communication at the Far Eastern University-Manila. In 2009 he was awarded (one of three students) with a film scholarship at the University of Southern California for their Fusion Arts Exchange Program: Screenwriting and Directing Program. Since 2007, Fade Longboy was exposed to various independent film productions of friends, as well as a handful of commercials and corporate AVP’s.

His course as a filmmaker was diverted in 2011 as he ventured into TV production when he became Cameraman for TV 5 and Segment Producer and Assistant Director for Pinoy Big Brother. Later that year, he resigned when he discovered photography. His passion in photography is well known over the internet. His photos flocked social networking sites in the Philippines and other countries as well. ”Siesta Series”, “Erotica Series”, and various “Video Portraits” are some of his raved works that delivered a different taste of eroticism, simplicity, and third-world feel in the photographer’s community.