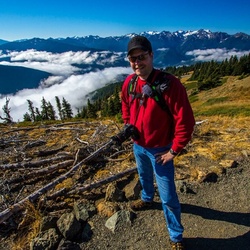 I grew up in Central Wisconsin, went to college at Purdue for electromechanical engineering and ended up working for a telephone company as an engineer. I hated it! I never knew where I would be, I didn't know when I would be home and I was miserable. My father told me "If you hate it, you won't be doing it for the rest of your life, so just come home and let's find something else. " That night, my neighbor was a paramedic and asked me if I wanted to go to work with him just to BS. I did and I was hooked. I left Indiana, went back to school and became a firefighter/paramedic. I started as a firefighter and worked my way through the ranks. After 27 years, I retired as the Assistant Chief of Fire Operations in July of 2018.

While visiting my sister on Whidbey Island Washington, we took a day trip to the Olympic Mountains. I did not have my camera with me on this trip, but my sister let me use one of her's. It was the first time I realized how much you miss in real life, but can still capture through the lens. It only hit me as we were sitting on a path and looking down at where we came from. We were above the clouds on a path that so many have taken before us, but I had a view that nobody else had and that view would change in a minute. My sister captured the moment and it is my profile pic.

I have been serious about photography since that day. Landscape, architecture or light painting, they all interest me to capture the moment.