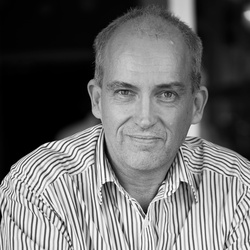 Nick Rains started out shooting concert and band photos for his University newspaper way back in the early 80s. In the 30+ years since earning an Honours degree in Zoology he has worked in almost all the different genres of professional photography - with the exception of weddings which he considers one of the hardest subjects to shoot well.

In those years Nick has photographed Americas Cup yachting and other major sporting events around the world, he has shot stock imagery throughout Europe, photographed company CEOs and industrial installations, wrangled snakes in the Australian Outback, worked behind the scenes at rock concerts and even hidden in the bushes as a paparazzi. He was named Australian Geographic magazine's Photographer of the Year in 2001 and in 2014 was named Travel Photographer of the Year at the AIPP's Australian Professional Photography Awards for his portfolio of Gold award prints (made on ILFORD papers).

Nick has also seen new technologies develop - even auto-focus was new once, back in the late 1980s. Keeping up with changes in the industry has been essential, particularly in the past dozen years or so as digital capture and print making evolved from a poorly understood 'dark art' into the highly refined hardware we take for granted today.