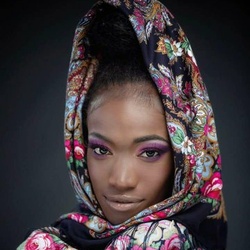 HaitianBratt who was born as Jennypher Pierre, found her artistic state of mind to enhance her career by building her Alter ego Paris and has never felt more driven and ready to push forward. She is now reborn as HAitianBrat and has managed to create art with many photographers and has done runway work. Her portfolio work currently consist of Lingerie,Calendar, Glamour, Print, Editorial,brand embassador,Cosmetic,accessories,collabs with other models etc.. she has been published in jetsetmag,ethnicqueen and Shuba magazine.

Her Personality is who shes been since childhood and it carries on to be who she is today. Born in 1994 in Haiti port-aux-prince, raised in Brooklyn,new York and currently resides in Miami Florida . With enough support she hopes to keep working with more amazing Artists and hope to influence alot each them that there is a right path towards modeling and in being, real Human beings.

In every photo shoot she gives you the true essence of a star.Her dream is to travel around the world and bring hope to small unknown countries in China,Indian,Haiti,Ect.She speaks English,Creole,and French very Fluently and wants to also learn,spanish,Dutch,and Chinese;to also help and mentor children who has a dream that people tells them is" Too big for them", its their reality calling.

she has a driven personality and has managed her modeling career based on strictly networking and studying,more about the industry.