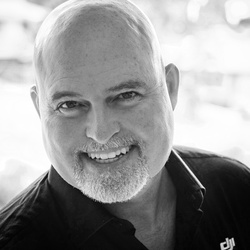 Randy Jay Braun has been a professional photographer for thirty-three years, starting early on as a medical and corporate photographer in large hospitals and heart centers.

On a creative whim, he took a trip to Maui in 1988 and has never come home to reality. During this extended vacation, Braun opened Maui’s most progressive portrait studio and a chain of photography galleries featuring his own landscape images and hand-painted black and white prints.

Braun created a collection of photographs based on the hula dance, which has been wildly popular with collectors and publishers worldwide; still selling strong twenty years after creation.

In late 2012, the DJI Phantom quadcopter came onto the market and Randy was one of the first photographers ever to adapt to this new genre of aerial image capture. He began testing consumer drones and cameras for DJI, the world’s largest drone company, and struck up a working relationship. Braun published the first-ever book about the topic, entitled, Aerial Drone Photography.

Randy Braun began working full-time for DJI in 2014. He served as Director of Product Experience and managed the Still Photography Development Team. During this tenure he rose to become a national expert in aerial drone photography, lecturing at every major photography and drone conference. In 2017 he co-founded the DJI Aerial Photo Academy, a traveling workshop series teaching drone photography skills across North America.