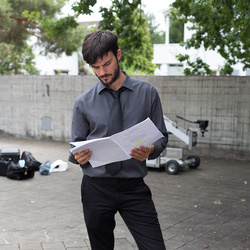 Ull Galindez is a German-Argentine photographer, actor and artist. He studied creative photography at the school of Andy Goldstein and film with Anibal Bosco. Furthermore he received the “Director of Photography" at the Argentina Film Industry Union (SICA).

A major theme in his work is the contemporary urban space, its social organization and its inhabitants. The "city" as a system, and its microcosm, people who go to that particular workplace every day or every night. A building lobby, a laundry, a parking space…

In 2011 he started with “Doormen” a series of portraits of concierges in the city of Buenos Aires. Another important work is his photographic series “Pais en Planeta“, which deals with his father’s schizophrenia.

Presently he is living in Buenos Aires, where he developed his artistic work and teaches photography workshops.