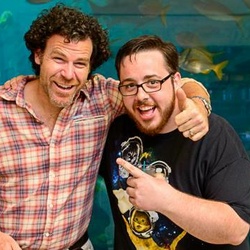 | BIO | April of 2012 was when I first acquired my DSLR camera. I had to quit playing music (drums) due to personal issues and so to stay close to the music scene that I held dear to my heart I wanted to photograph concerts and record music videos. All of it was coming together and after my first local concerts I was in LOVE with using my DSLR. Editing video wasn’t a new thing for me because when I was younger I used to edit AMV’s (Anime Music Videos). It’s basically just how it sounds; I would take clips of my favorite cartoons or Anime (Dragon Ball Z mostly) and make them match up with some of my favorite songs at that time. A couple months had now gone by and I was basically attached to my DSLR at this time, this is when I met Chris Erica Davis of Nico-Studios. I met Chris on July 1st 2012 at 1039 The Bear’s Big Growl. We became good friends and she willingly took me under her wing. Chris gave me the first hand experience I needed and craved. With her help I was able to assist, shadow and shoot quite a handful of weddings that has sky rocketed my work.

| Personal Interests | At my core I believe I will always have my nerd tendencies. I love my old school video games (SNES & 64), comedy movies (Shaun of the Dead, Super Troopers, etc), tearing apart computers.. When I have free time I have a small home studio to which I make music and/or record friends and clients with.