Teen Falls to Her Death at a Popular Arizona Photo Destination

Arizona is a beautiful state with a variety of breathtaking terrain to explore and photograph. Recently, a teen fell to her death at a popular Arizona photo destination, reminding us all to be a little more careful while we’re out exploring.

On Christmas Eve, a teen (14 years old) was reported missing after she was last seen at the Horseshoe Bend overlook in Arizona. Authorities located the teen’s body the next day some 700 feet below the overlook. It was concluded that her death was the result of an accidental fall.

It’s almost hard to believe that a destination that receives so much foot traffic, nearly two million visitors in 2018, could be the sight of such a tragic accident. In fact, this was the second fall-related accident resulting in death at Horseshoe Bend in 2018.

Horseshoe Bend by Elia Locardi from the Fstoppers tutorial "Photographing the World: Part 4."

While some of Arizona’s most scenic locations, such as stretches along the Grand Canyon, have guardrails installed to keep visitors at a safe distance from danger, there are many areas with no such provisions, and photographers tend to push the limits when it comes to where you can and cannot go safely at these places. I've witnessed this type of poor decision-making first hand. It’s important to stay surefooted and levelheaded while exploring the US Southwest. Complacency kills. So remember, just because nearly two million people visit a specific area each year doesn't mean that accidents can’t happen.

This is a good warning, but very sad and I feel bad for her family. I've done some serious hikes throughout the west and I can't believe how many people try them totally unprepared- without the right gear and enough water. There are warnings all over at trailheads, so it's a good idea to follow them.

For those who haven't been there, here's what the scene looks like (taken in 2013). Note the tripod placement near the middle of the frame. 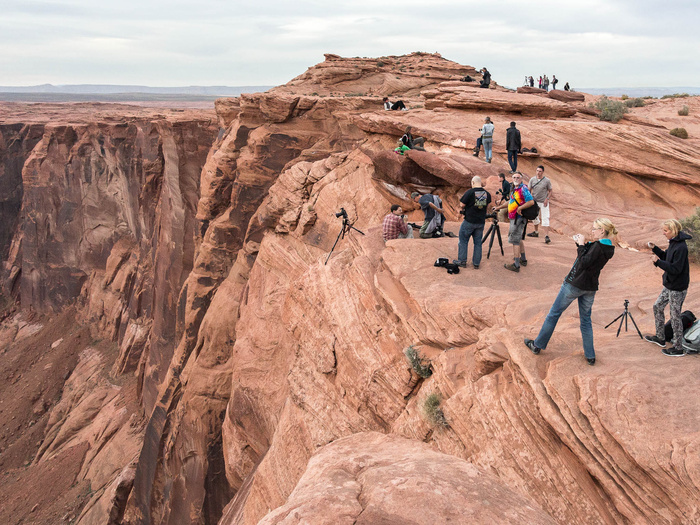 Thanks for sharing that perspective

If that's not what drove him to take such dramatic steps, then I wouldn't be sorry for him if he meets something unfortunate. His family will still receive all my sympathies regardless.

That tripod placement is insane, seems to defy physics! I remember being there in 2017. Sat on the ledge that's to the left of the guy in the black tshirt with his back facing us in this picture.

When I visited there a few years ago I belly crawled toward the edge (yeah I'm a wimp when it comes to heights). I don't think I even got close to the edge but my palms were still sweating. It's a beautiful location but it is high and you are totally exposed.

They've definitely changed it all. They put up a wooden deck and railing up along the edge earlier in 2018.

After unfortunate incidents like these, there's probably going to be a push for more infrastructure.

It will make it more accessible, but at the same time detract from the natural beauty of the place.

If that's the case, it's a bit of a shame. That whole area of Arizona is magical.

Been there again this August and they are already putting up rails. The outer edges are still exposed. The stupid shit people do there boggles your mind. Jumping right at the edge, tip toeing right on the edge. What these idiots don't realize is that it's a sand covered sandstone which gives you very little if any traction at all. One cm too far and you are dead. We live in the generation of idiocy so these kinds of deaths are going to become more frequent.

All the power to you if you like to do this kind of photography. I'm scared of heights so count me out... Sucks to hear that someone died.

The US are like another world to me. It is so weird here in France. About 30 people die in the same way as this girl every hiking season in the French Alps (30 more every winter). I never knew what to think of the fact that no one pushes for guardrails anywhere someone has died. In fact, the usual consensus is "shame, it was an accident, could have happened to anyone". Some of the walking trails in the Alps are insane. Like Angel's Landing with no chain, open to the public with no special equipment and everything. Same in Italy, although they tend to be more cautious. In fact in most of Europe the idea is "people are responsible for their own safety". Totally different story in the US, Canada, Australia, NZ, the UK... where it's "what could be done to prevent that again ? Should it have been prevented in the first place ? Should the trail be closed or should we secure it fully ? Is it the government's fault, after all they own the land ?". To be clear, my opinion on Horseshoe Bend now is that it should be secure. In France, people at least expect it not to be secure, that's the default state, and as I understand it it's the same in Iceland. The US is the opposite, people expect a safe area. Horseshoe Bend has become so popular, the crowds give you a false sense of security and people do dumb things. When it's like that, even if it ruins the location a bit, you might as well put railings... To me the location is already ruined by the insane crowds anyway...

Some people in the US expect a safe area but not all. You can't run guardrail everywhere either.

Wow, 9 posts and only one came close to claiming a Darwin Award! Maybe fStoppers is growing up...

It’s a terrible tragedy, and it could have been averted not by guard rails and fences, but by attentive parenting. I’m not sure why a 14 year old was left to her own judgement, but kids are natural risk takers who need guidance in places like this. I’m a photo tour operator, and have taken hundreds of people to the Grand Canyon, Death Valley, The Valley of Fire, and ghost towns all over Nevada, California, and Arizona. Safety briefings happen with all my guests, and sometimes accidents still happen. We’ve had funny mishaps, and more serious ones, but when death is a possibility I’m certain to buddy people up and don’t mince words. “You can die here if you don’t pay attention“ is an everyday phrase for me.

Side note, I was once explaining to some clients the dangers of falling at Eagle Point on the West rim when I was asked why there were no guard rails. One of the Hualpai chimed in that “the land was made by the Gods to be appreciated for its beauty and its danger”, and “we never had to worry about anyone falling in until you Europeans started wandering around here without looking down at your feet”.

We had a laugh about that!

I have been to Horseshoe Bend. Very beautiful but very dangerous. It is a one strike ball game if you slip. Nothing to grab on to. Just slick rock. The guy in the plaid shirt; the woman in the lower right hand corner with her left foot near the edge makes me nervous. I agree with Mr. Bolen's comments. I have seen folks a couple of miles down the Bright Angel Trail at the Grand Canyon wearing flip-flops. Folks seem not to understand then environment they are in.

So there is literally a one in a million chance of dying at this location. There's probably a higher chance of dying in a car crash on the way there. Still very sad for that girl and her family.

On my one and only (so far) trip to Horseshoe Bend, I did exactly what no one is supposed to do -- I walked out to the edge, and stood there, toes dangling over. I took my shots, and turned around to walk away when I spied my wife, who was 50 or 60 feet behind me. She was white as a sheet. She pointed out a sign that indicated that it was possible for an edge to collapse without warning. I hadn't seen the sign.

I was lucky that day. It is something I'll never do again.

There is a similar overlook in Yellowstone National Park, but there the edge is lined with massive boulders to keep people from getting out on the edge. The drop is only about half what it is at Horseshoe Bend, but the fall would still kill you.

I was there one day when a couple of young boys came running down the trail, and leaped up onto the rocks. One tiny bit more momentum, and they'd have been over the edge. Indeed, one of them almost did lose his balance as he tried to stop that forward momentum. Their parents? Far behind them, strolling down the trail as if nothing was going one.

And of course, there's the story about the couple who died in Yosemite while taking a selfie, and fell of the cliff.

Yes, it's dangerous. But too many of us (myself included) let our guard down when we need most to keep it up. Some of us are just luckier than others.