My faith in humanity just took a nosedive. We've seen plenty of people injuring themselves pursuing the prospect of social media accolades, but now, the pursuit of likes has taken on an exploitative nature and has killed an innocent creature in the process.

The La Plata dolphin, a rare species (only 30,000 are estimated to exist, giving it a "vulnerable" status), is known for its tendency to shy away from humans. Nonetheless, tourists in Argentina passed one around for selfies, crowding and fighting for the chance to hold it, until it died of dehydration. Said Ayelén Rodriguez: "It was just a baby, an incredible animal that had the misfortune of running into the worst kind of mammals — humans."

I often read discussions on the ethics of disturbing habitats, or even effecting a change in animal behavior simply by being present with a foreign-looking object — a camera. To knowingly and willingly destroy an animal's life simply for social media attention, though, that's just abhorrent. This isn't the first time selfie culture has threatened or destroyed wildlife either; in recent years, sea turtles in Costa Rica have been forced to abandon nesting sites that have been overrun by tourists seeking pictures with the creatures.

While those involved in this incident were likely normal tourists, not necessarily professional photographers, it serves as a stark reminder that whenever we pick up a camera, we have a responsibility to respect that which we point it at and to never endanger any form of life simply for "the shot."

Posted In:
Animal
News
Other
19 Comments

The worst was the picture of it, lifeless on the beach. Discarded after use.

This whole situation is the perfect example and summation of our society.

This "news" has been proved wrong. The dolphin was already dead when he arrived on the coast, tourists even tried to save him before, putting him back in the water. http://www.snopes.com/2016/02/18/dolphin-killed-by-beachgoers/ this is the interview of the guy who took the photo http://telefenoticias.com.ar/actualidad/hablo-el-joven-que-saco-la-foto-...

I'm aware of that interview; however, multiple witnesses and a branch of the World Wildlife Foundation have indicated that two live dolphins were pulled from the water, causing the death of one.

Do you have a source, please? I really didn't want to believe this...

Sure, here's the statement: http://www.vidasilvestre.org.ar/sala_redaccion/?14420/Delfines-francisca...

I wouldn't trust the guy taking the pics with the dying dolphin to make a correct account of how the said dolphin died...

Snopes doesn't call a false on the claim in your link, it just tells the basic story and offers the counter-claim. So, not proved wrong, though I was really hoping otherwise.

There was an interview yesterday on NPR where a scientist who studied mosquitos made it very clear that she was perfectly OK with wiping out "just one" species of mosquito simply because it carries the malaria virus. So since it carries a disease that hurts humans, we should just kill it off. She failed to mention all of the death and disease that humans carry and inflict on other animals. Why not kill off "just one" species of human?

Point is, we are animals like all other animals. Savage. You'd think our intellectual advantage over other animals would also translate into compassion or at least a sense of responsibility for our own actions, but we still have a long way to go. Centuries perhaps if we don't destroy our world or ourselves first.

As for the photo, I'd give it a 1. Snapshot at best, doesn't show much effort in composition. But at least the lighting is off-axis to the camera.

Humans are a single species. DAFUQ you be smoking?

Well that depends on which pseudo sciences you believe in :P.

I think he just meant that this scientist's view are not valid (wiping out 1 specices of mosquitos) because humans are far more destructive. And if we are to "delete" one species from the planet, might as well be us...

Why? I really can't understand why....

I pity the human race for such stupidity. We have climbed up to the top of the food chain, and be an intelligent being so we can be so stupid, reckless, and unethical.
I hope those selfies/snaps would be beneficial to the world! F*CK

I sometimes wonder if we as a species even deserve our place on this planet... I am all for going the extra mile for getting that photo, but at the cost of a life? Wrong doenst even cover the load on this one...

And here I feel guilty for whistling at the wild turkeys I photographed this morning.

I know the feeling. I wanted to get a picture of a bird in flight so i had my brother swim towards it to scare it into flight. I felt guilty afterwards and realized i was not being at all respectful. Then there are these people.

This is disgusting. I hope authorities track down every visible person in that picture and at least fine them, especially the guy holding the poor dolphin. Makes me sick...

May not be as cute as dolphins, but should this guy pull out this fish from the water to get a shark-selfie? Is this considered "catch and release?"
http://www.dailymail.co.uk/news/article-3457132/Time-quick-snap-Man-film... 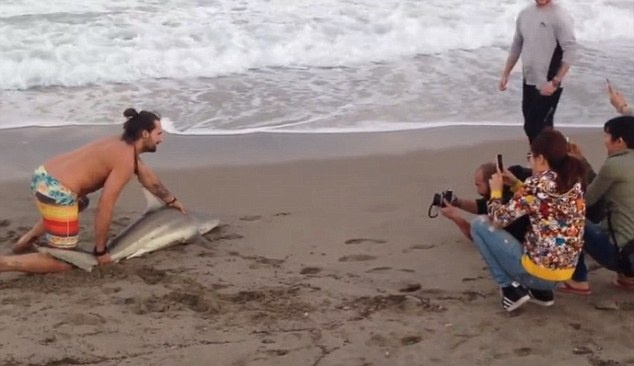