A Guide to Spain for Photographers

Reports are coming in from Madrid of price hikes of 1000% for rooms in the Spanish capital. The cause for this is two English soccer clubs competing in the finals of the Champions League, arguably one of the world’s most watched sporting events. With all eyes on travel options to Spain, I thought I’d share some of my photography related highlights there.

As a European based travel photographer, Spain was the country where I was sent to most frequently. Over the course of 7 years, I was sent to Spain on 8 occasions, spending over 6 months in total. It is my favorite country to visit, but requires a lot of effort in research and planning to make the most of a trip. Much of the coastline of Spain has been decimated by irresponsible mass tourism which means that my favorite locations are mostly inland. In no particular order, these are what I consider to be the most photogenic locations in Spain.

1. The Fairy-tale of Granada

In the A.D.700s, North Africans conquered the Iberian Peninsula, including what is now Spain. They created a new architectural style blending Arabic and European styles. This architectural style can be seen in palaces all over Spain, but the pinnacle is the Alhambra in Granada.

Once the Christian armies reconquered Spain in 1492, the Granada ruler wept as he expected the breath-taking palace to be destroyed. Fortunately, it was preserved and is now a UNESCO World Heritage Site.

While I certainly recommend a visit to the palace, my favorite view of it is from Mirador de San Nicolas in the old town of Granada. The view (from where the lead image comes from) takes in some of the old town, the Alhambra and castle on a hill overlooking Granada and the Sierra Nevada mountains in the background. At sunset, it’s like a media scrum, but for those who can wake up for sunrise, you can have the view to yourself. 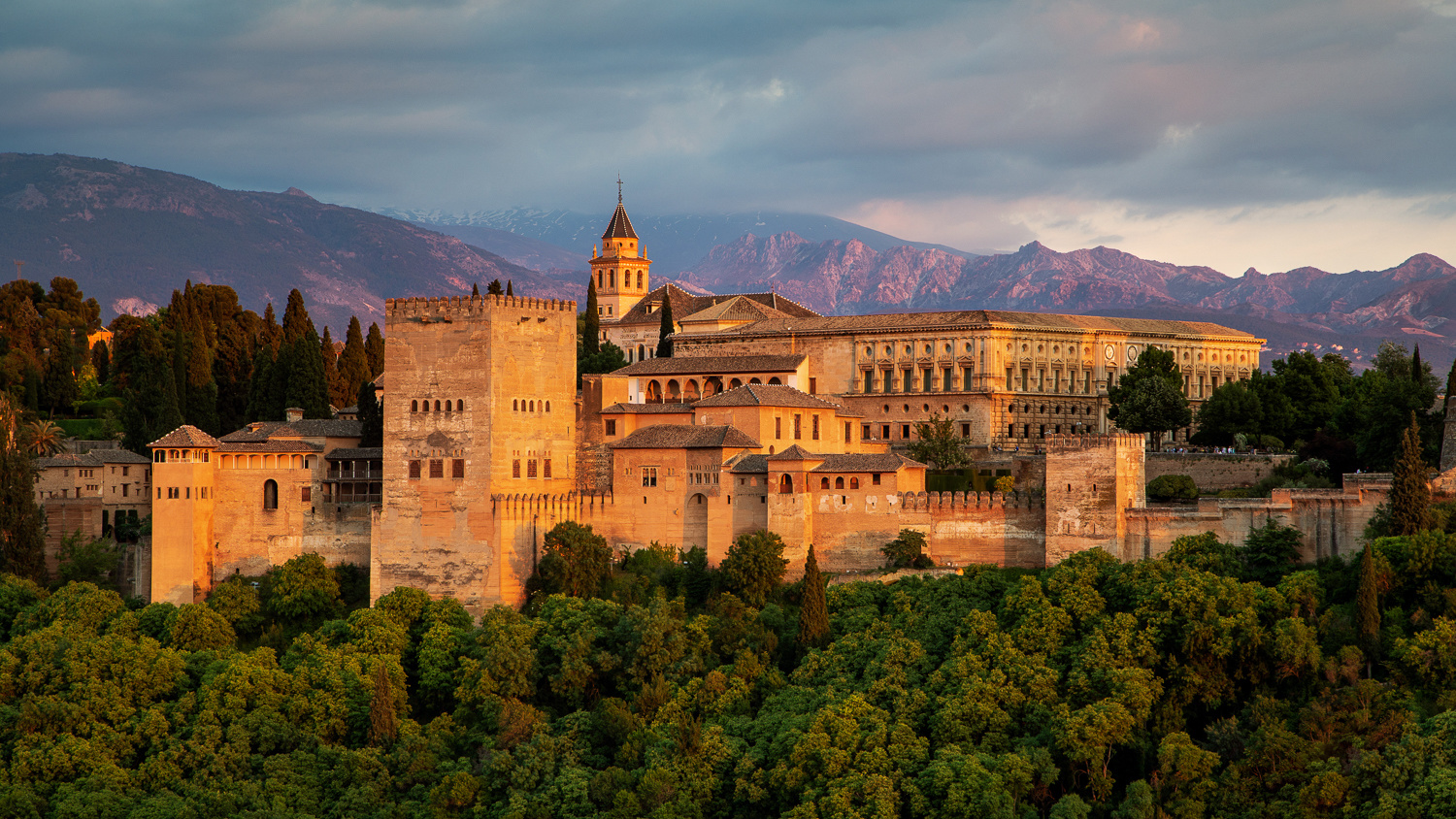 View of Alhambra from Mirador de San Nicolas in Granada.

Some other must-see sites in Granada are the cathedral, the Monastery of San Jeronimo and the contemporary Science Museum.

2. The Future in Valencia

In 2005, Spanish architect, Santiago Calatrava was propelled into infamy for his work on the City of Arts and Science in Valencia. By the time it was finished, it was three times over budget, severely denting the budget of the city. The net result was a breath-taking vision of the future including public parks, incredible bridges, a museum, a performance hall and an aquarium. 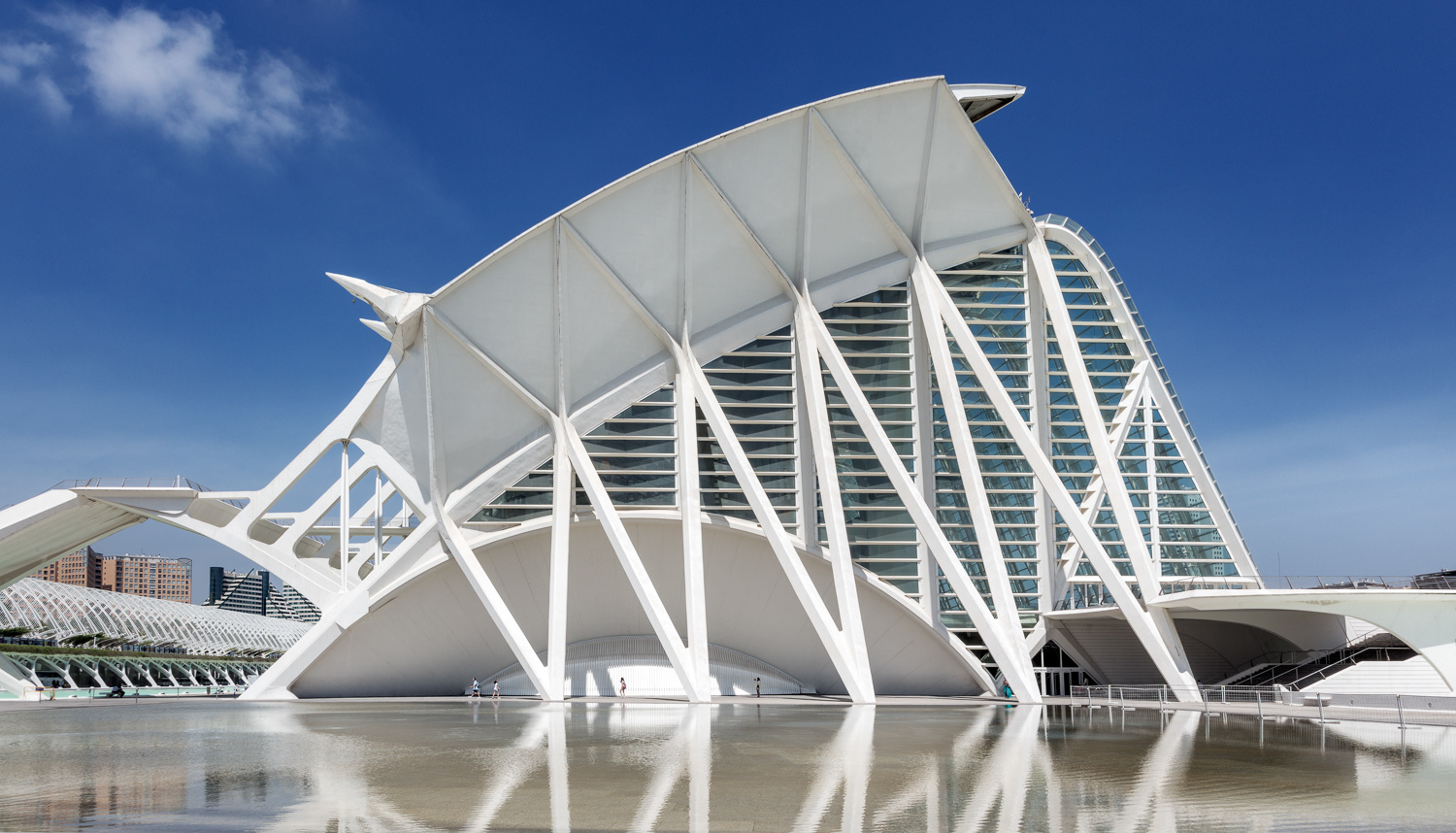 The Science Museum in the City of Arts and Science in Valencia.

If you’re a fan of architectural black and white imagery, you’ve probably seen the site — it is tailor made for this genre of photography.

Also worth seeing in Valencia is the historic market and the La Lonja de la Seda.

3. The Cliff Hanging Homes of Cuenca

As I drove into the medieval city of Cuenca, I received the gut-wrenching news that I was unsuccessful in my job application for architectural photographer at one of London’s most notable practices. I had gone through three rounds of interviews and tests and was one of two left for the role. In my mind, I was already in the role. Getting this bad news was quickly offset as I saw Cuenca, precariously hanging from a cliff. Having the job of photographing Cuenca took the sting out of the missed job in London.

There are numerous places to view this medieval architectural feat, but my favorite was from the mountain overlooking the city called Mirador del Cerro del Socorro 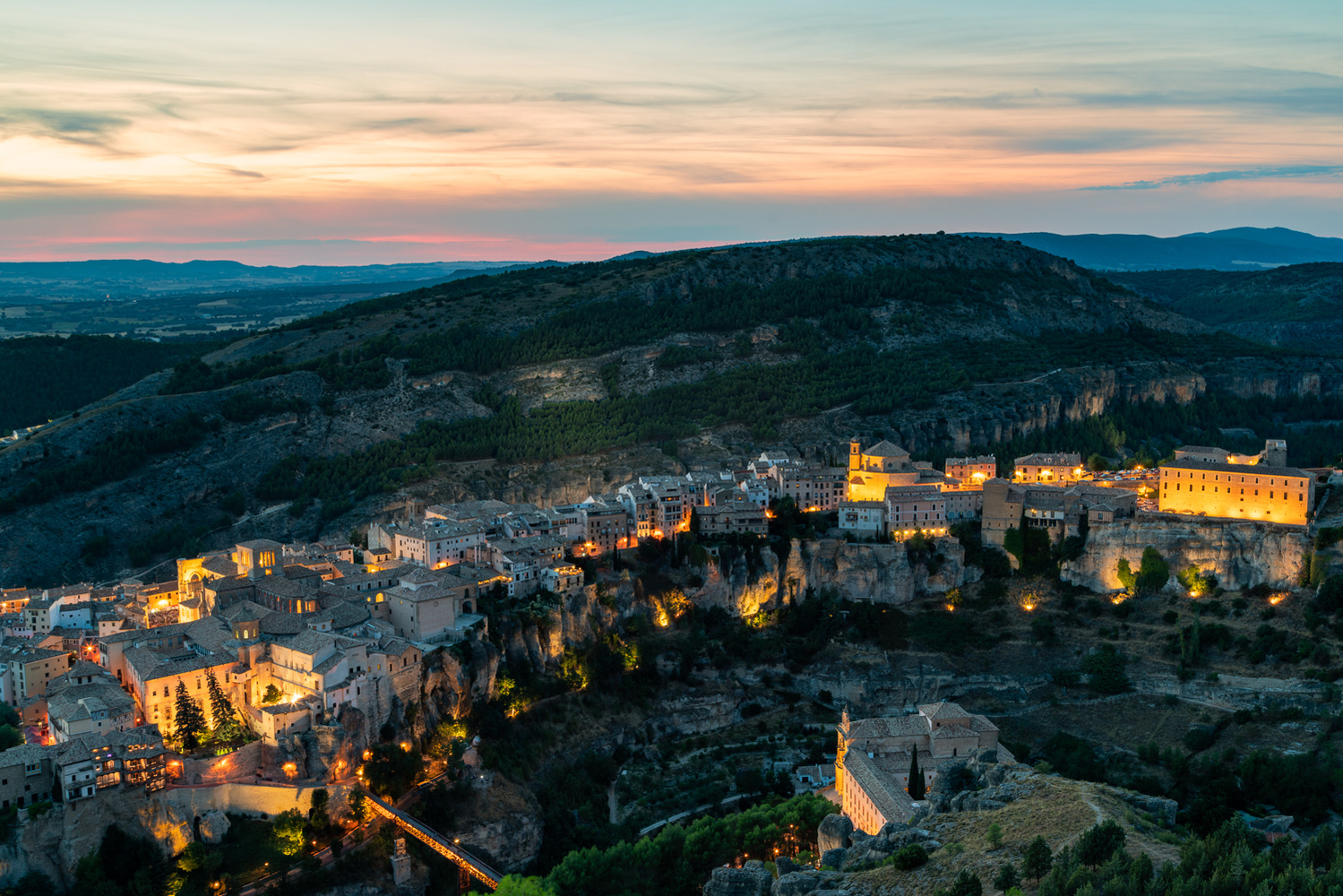 4. The Reach of Rome in Córdoba

The Romans built some incredible bridges in Spain. My personal highlight is in Córdoba. The Roman bridge leads into the Old Town culminating at the spectacular Mosque Cathedral. Lit up during evening twilight is one of my favorite scenes in Europe.

If you thought the Mosque Cathedral sounded like an oxymoron, let me explain. When the Christians reconquered Spain, they left most of the original mosque in place, but added gothic finishes to create a one of a kind cathedral. 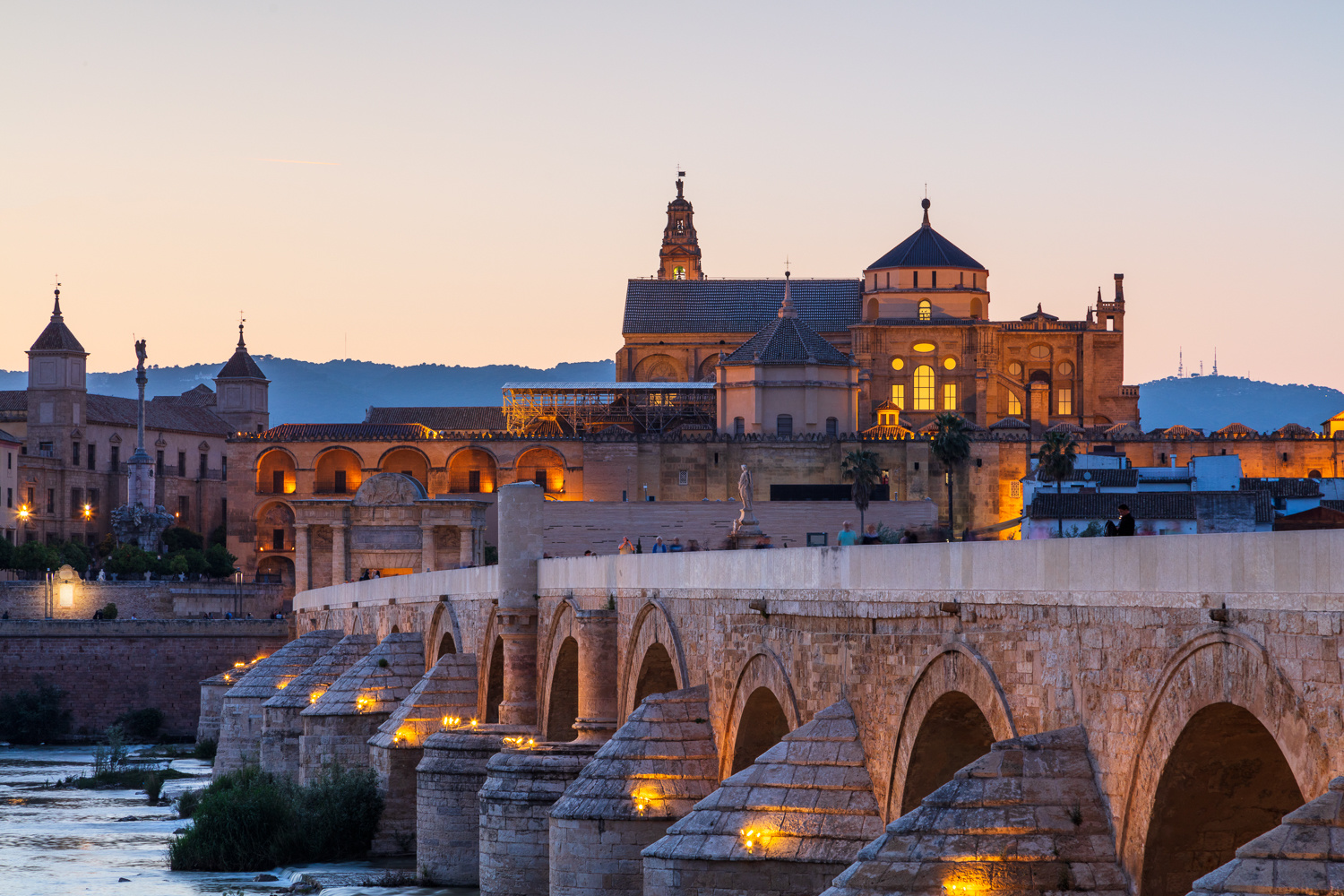 The Roman bridge in Cordoba, Spain, originally built by the Romans in the early 1st century BC and rebuilt several times since.

Between the roman bridge, the Mosque Cathedral and the porticos (in spring), Córdoba is an absolute visual treat.

On the subject of Roman bridges in Spain, an equally impressive scene is the Roman Bridge leading to the Lady of the Pillar in Zaragoza. 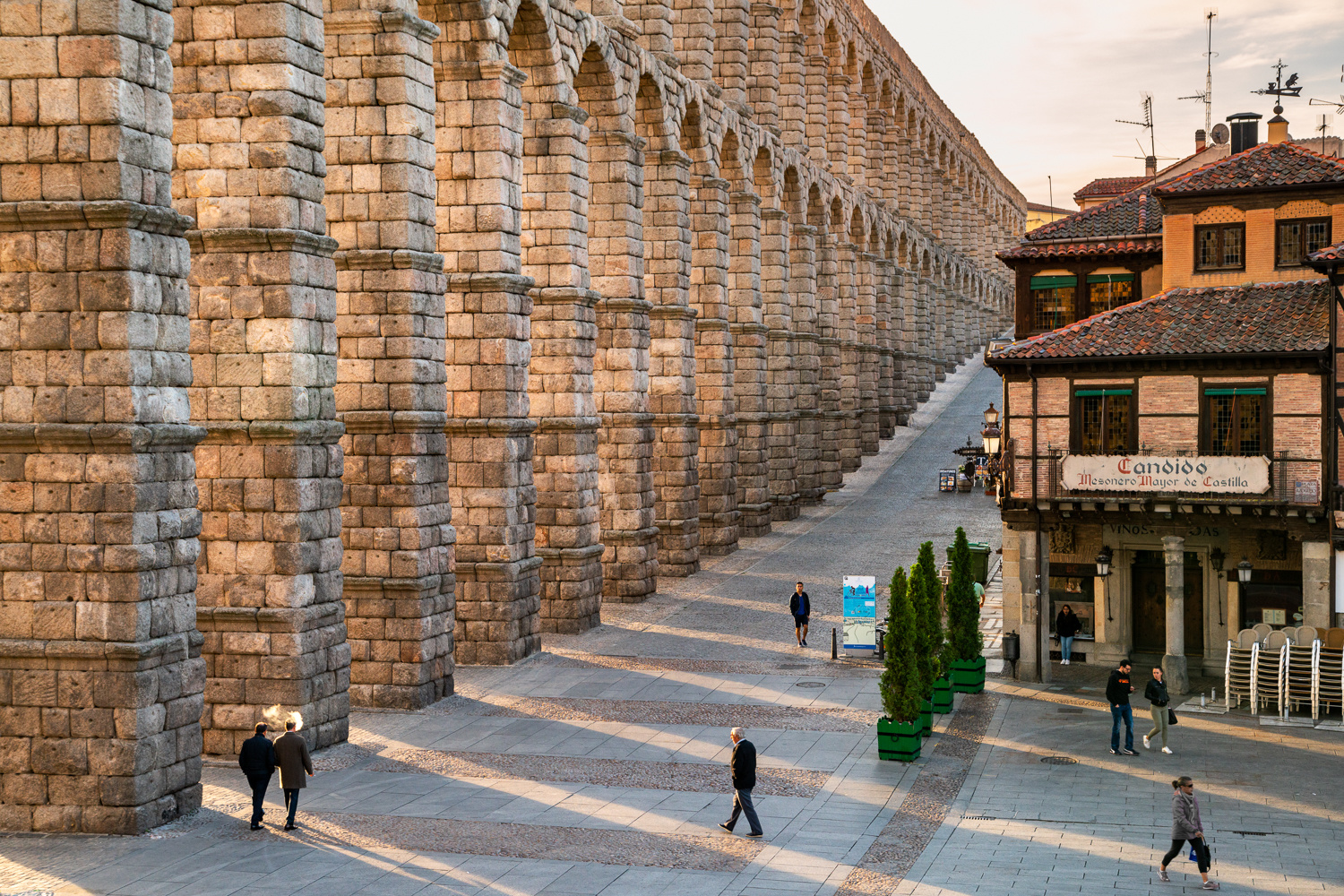 The aquaduct in Segovia

Additionally, Segovia has a castle straight at of a storybook and a breathtakingly beautiful cathedral.

I tend to avoid the Spanish beaches, but I make an exception for San Sebastián. What this Basque coastal city has in its favor is that it was a popular seaside town before mass tourism. This means that there was never the space for high rises to be built on the coast.

Three factors make San Sebastián exceptionally photogenic - two mountains on either side of the bay provide amazing views, the coastline can take on an incredible turquoise color and finally, the old town is famous for pintxos bars which spill out into the narrow streets.

Up until now, the focus has been on the urban environment. The best way to escape it all is a stay in a traditional Spanish home in the Cabo de Gata-Níjar Natural Park.

This stretch of coast is located within a national park, meaning the old fishing villages are the only form of development. Most of this coast is wild and untouched. Additionally, the region includes volcanic rock formations, giving the coastline a stark, dramatic appearance. 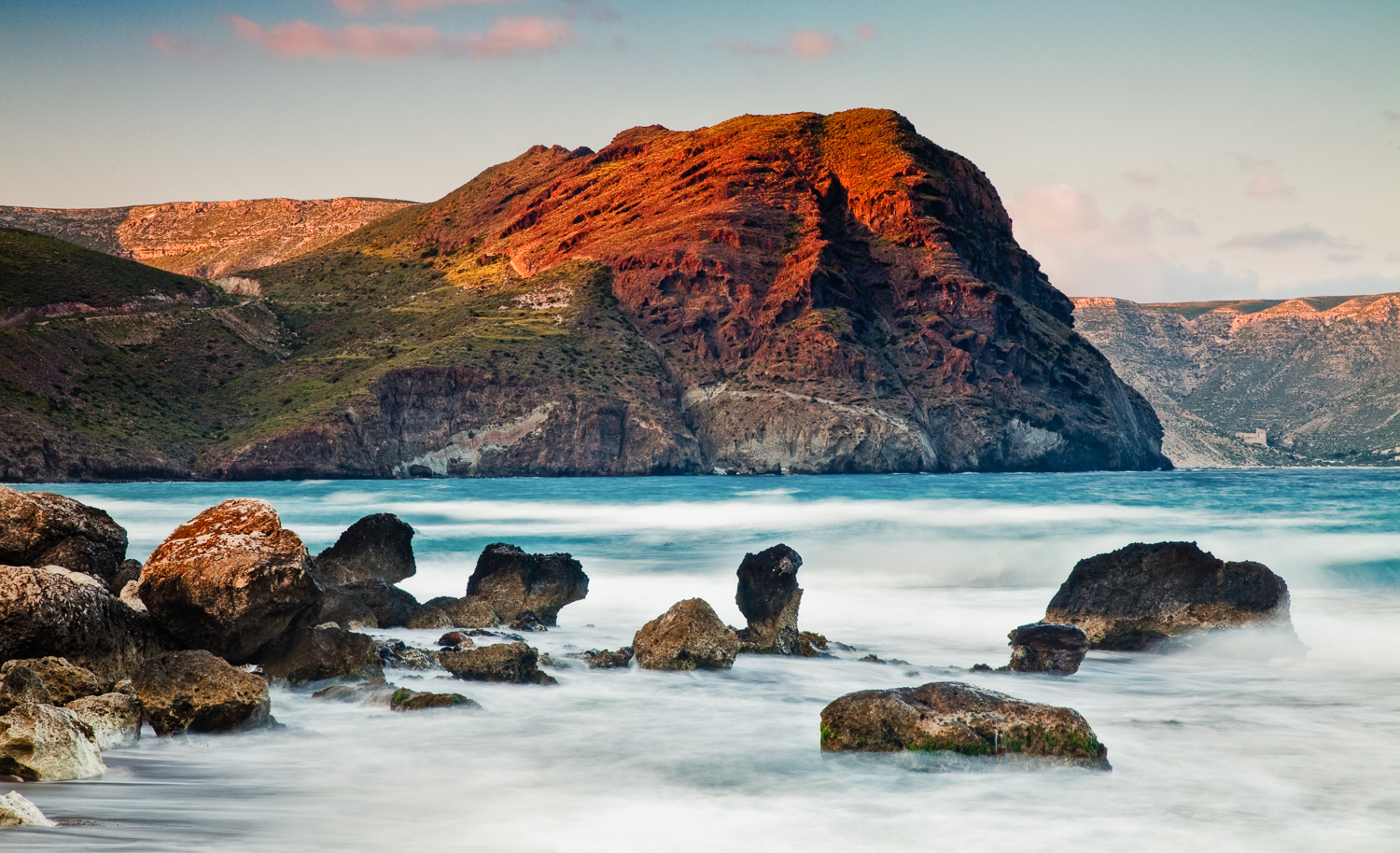 Throughout Spain, tiny, whitewashed villages dot the hilltops of the countryside. These towns offer great views, both of the town and the surrounding countryside.

My personal favorite is Vejer de la Frontera near the bottom of Andalusia. The town itself is beautiful and is a worthy subject. Additionally, on a clear evening you can see the mountains of Morocco simultaneously seeing both Europe and Africa.

The whitewashed village of Vejer with views towards Morocco.

9. The Most Spanish City in Spain

Most Spaniards I meet love the city of Seville. To a person, they mention it is the most Spanish of the cities in Spain. I’m not entirely sure what this means, but if it is a cultural reference, I’d understand. Seville is where you’d find the most authentic of Spanish traditions from tapas to flamenco.

The highlights of Seville are the cathedral, said to house the remains of Christopher Columbus and the Alcazar, another Moorish palace that might be better known as the Water Gardens of Dorne from Game of Thrones.

A great contemporary addition to the city is the Metropol Parasol, a modern twist on the traditional Spanish square. 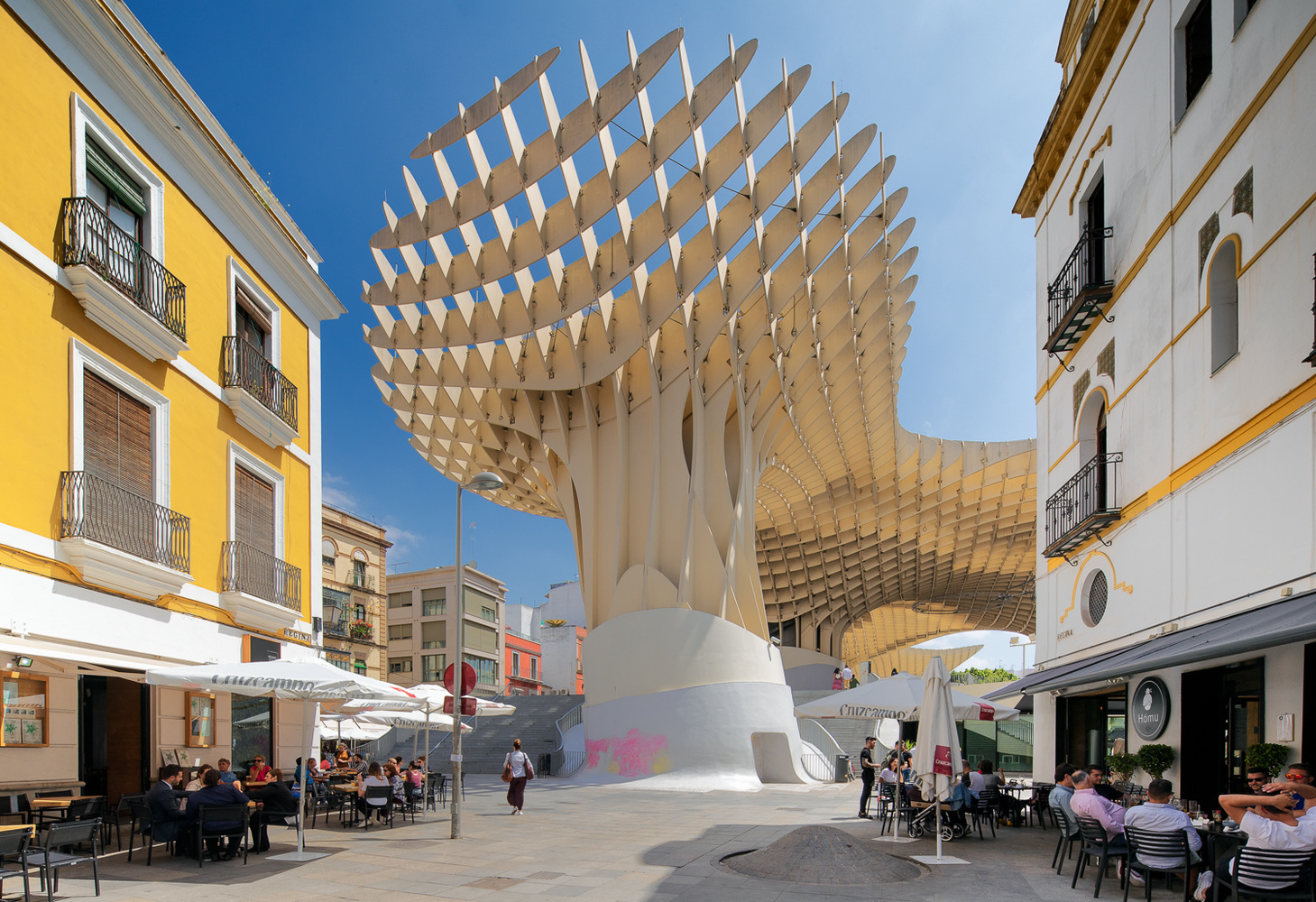 The Metropol Parasol, a multi level public square in the historic old town area of Seville.

The rivalry between Madrid and Barcelona goes beyond just the soccer teams. The cities have competed for decades. Both are world class cities, but for a trip, I would only recommend trying to fit in one. Barcelona feels more international and for that reason, I tend to prefer Madrid.

Covering the attractions of Madrid would take an entire guidebook, so instead, I’ll briefly mention my personal three favorite photography subjects.

The first is the palace, viewed from the Sabatini Gardens just below it. The view of the side of the palace, but coupled with the gardens, it makes for an incredible site. 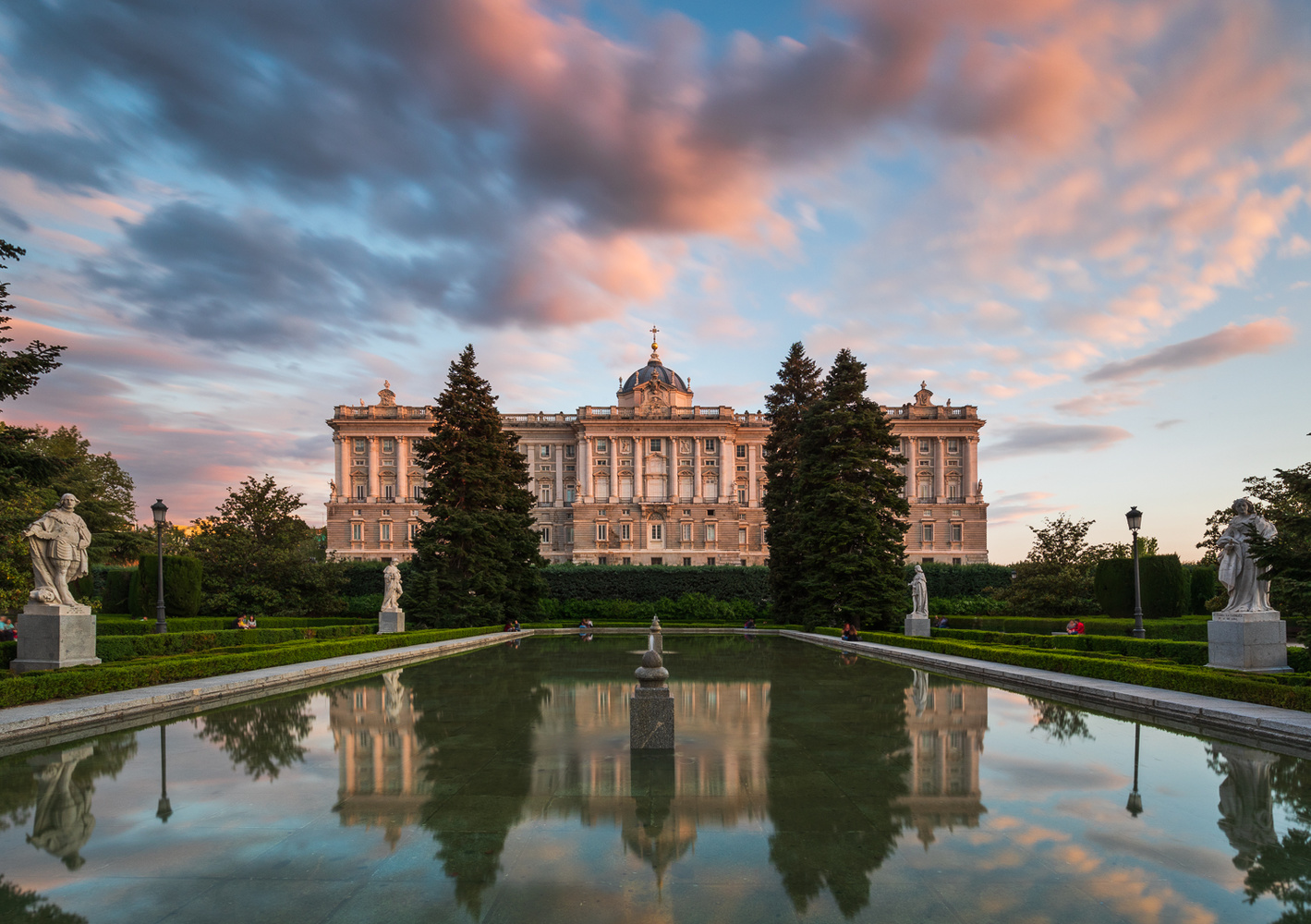 The Royal Palace in Madrid viewed from the gardens below.

Nearby is the Temple of Debod, ruins from Egypt that have been transplanted in Madrid. This is a great place to see the sunset and also provides a good view of the Royal Palace and Cathedral.

Finally, Retiro Park, an enormous public park in the center of the city has a large array of photogenic subjects.

Put Spain on Your European Wishlist

I’ve been fortunate enough to have visited most of Europe. Every country is well worth visiting, but my personal favorite has to be Spain. With such a diverse range of attractions to enjoy, there is something to enjoy for every photographer. With an article this length, I had to leave out many of my highlights. Are there any notable exclusions I should have included? Please add them in the comments section.

My next European trip, flights have already been booked, now the planning stage!

Don't forget the North- The old capitols of Burgos and León are full of wonderful stuff to photograph. If you prefer landscapes rather than cityscapes, the Picos de Europa in the Cantabrian mountain chain are fantastic and relatively accesible.

I agree.
To see the Poblet Monastery… Ujué… Saragossa… Segovia… Burgos… Lleida… and many others

while in Spain, do not forget to watch a Flamenco Dance/Show. its so worth it. loved it when we visited there last year. when in a show, try not to sit too close to the stage, somewhere in the middle and facing the stage (if your booked onto a round table).

and in Plaza de España (cover photo of this post) you can actually watch a free Flamenco dance but try to leave a tip for the artists. Oh, and the paella, its a must!!

I watched my first flamenco performance in Seville. It was incredible!

Gorgeous photos. I have 3 nights in Barcelona next month. It's my first trip to Spain, and I'm pumped. Any recommendations?

How could you forget Toledo?

I didn’t, I just didn’t have space for it in the top 10 list. I loved the city though!

Nice read, would love to see one for landscapes in Spain :)

Thanks. The area around the Sierra Nevada is amazing for landscapes

Now!! If you go to Spain, also visit Portugal. Couldn't we just fuse both countries? Like, call it Iberia or something.
Also to mention Finisterra, in Galicia, Asturias and its Picos de Europa, Pirineus and nearby Andorra.
Andalucia and Alentejo in Portugal are one of a kind region to visit, architecture is almost the same through all the landscape. Vejer is a large scale Monsaraz.
Also Andalucia/Alentejo makes up for some of the greatest dark skies in the whole peninsula.
The Iberian peninsula has a lot of treasures to be seen.

I love Portugal too. I’m glad they’re separate though, it would have been too much to cover in one article!

Yeah, throwing some centuries worth of battles down the drain.
Still, I find both countries very similar and wouldn't mind if they'd merge.
I'm portuguese hahaha and I might get beaten for saying this :P

A few more from someone local:
Santiago de Compostela, León, Burgos, Salamanca, Cáceres, Mérida, Toledo (a must if you are visiting Madrid for a few days), Girona, Cádiz...
Enjoy!

I haven’t visited all of those locations, but I struggled to leave Salamanca, Merida, Toledo and Cadiz off this list!

Thanks a lot, I am living in Andalusia (actually, Gibraltar) and found some interesting tipps about my neighbourhood.

And Barcelona is not even mentioned:(

Yes it is - under the Madrid section.

I'll definitely touch down these locations to take bomb photos for my Voyage Album when I visit Spain.
I learnt La Concha, Mezquita of Cordoba, Sagrada Familia, Ibiza are also top photogenic locations in Spain.