You've seen him dive the deep depths and hang off skyscrapers just to get the shot. This time, photographer Benjamin Von Wong takes it a little easy on the daring part of his latest project, but the passion and message are just as strong. Let's take a behind the scenes look at Von Wong's latest shoot, "Toxic Laundry."

Today's society is facing a problem, a problem so microscopic, that the general public does not know or can even see it happening. America's tap water is being contaminated, and the laundry that we do every single day is the cause. An astounding 94 percent of American tap water contains invisible plastic fibers, these fibers (nylon, spandex, polyester) escape our clothing every time a load of laundry is done. These fibers are so small that water treatment centers can't even stop it, we're drinking these fibers every day. These facts set the precedent for Von Wong's latest project and goal to make the world a better place. 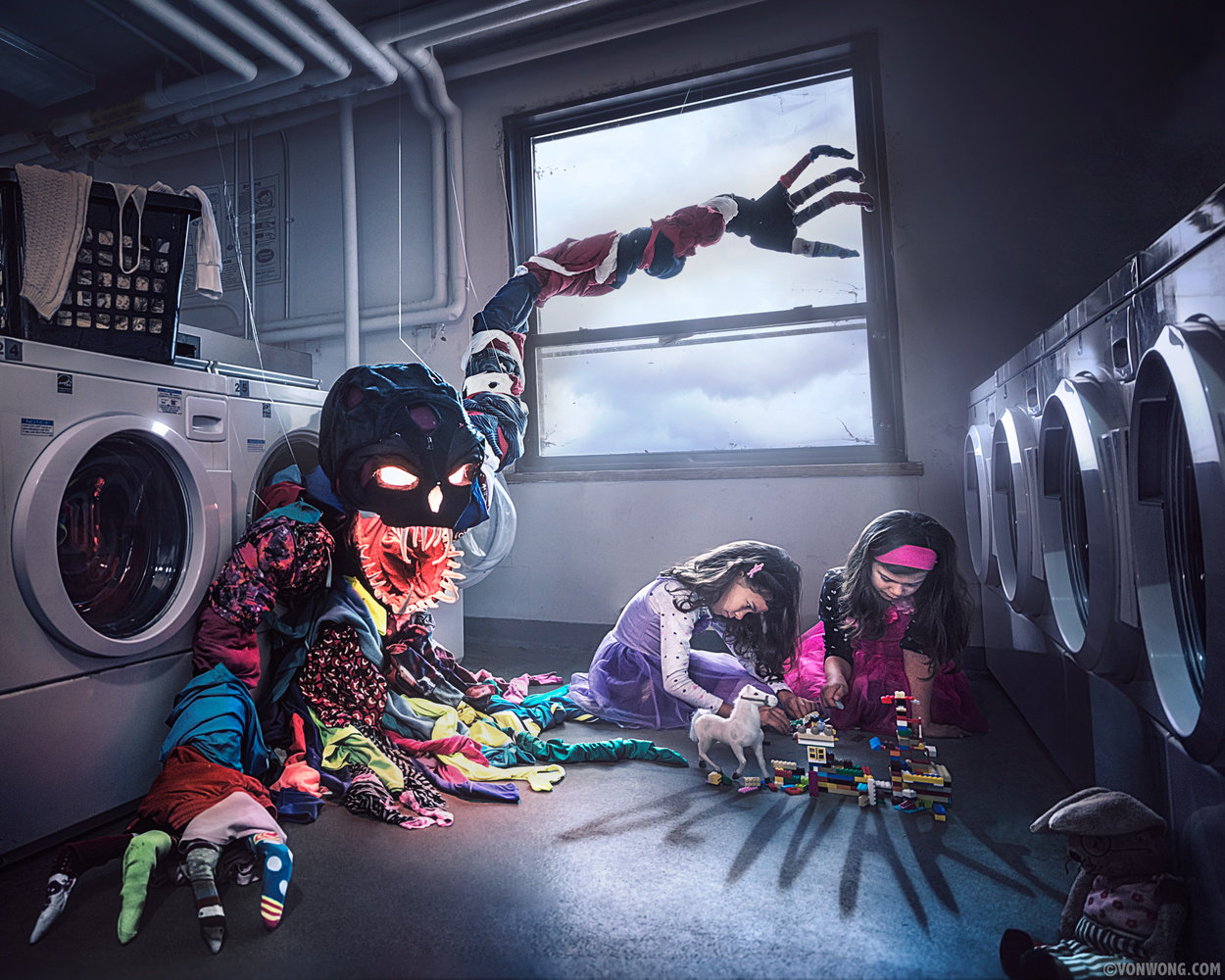 The main characters were designed by Lee Deslisle. The monsters were made up of an anglerfish, creepy tendrils, and a few simple snakes. They were created out of recycled cardboard, wire and fishing line. The clothing used in the shoot was sourced from a local Goodwill in the D.C. area. To support and suspend the monsters, the crew used Avenger C-Stands and Manfrotto Flex Arms.

The transformation of an empty biology lab into a "monster assembly line" took the team about ten days. Three students took time out of finals week to help out on the project. Von Wong cited that he drew a hint of inspiration from Stranger Things while building the monsters and the overall creative concept of the shoot, as you can see. 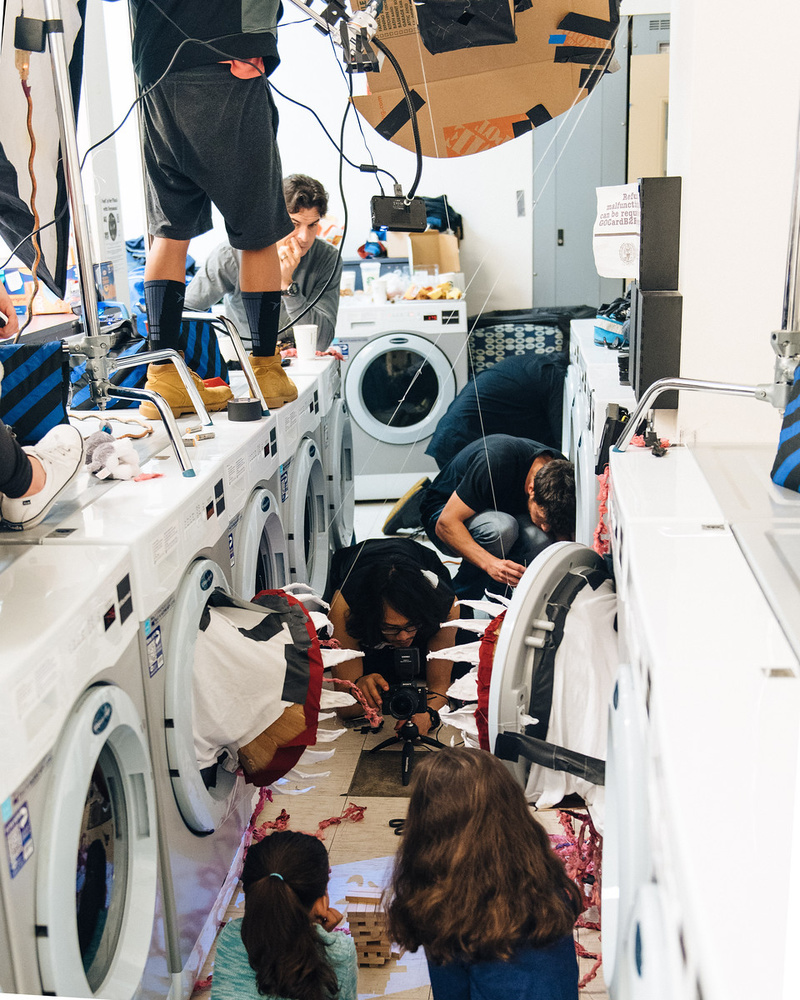 The sets took hours to design and set up the tentacles correctly to make the images as impactful as possible. A team of 30 volunteers day-in and day-out helped Von Wong's vision come to life over the course of the week. 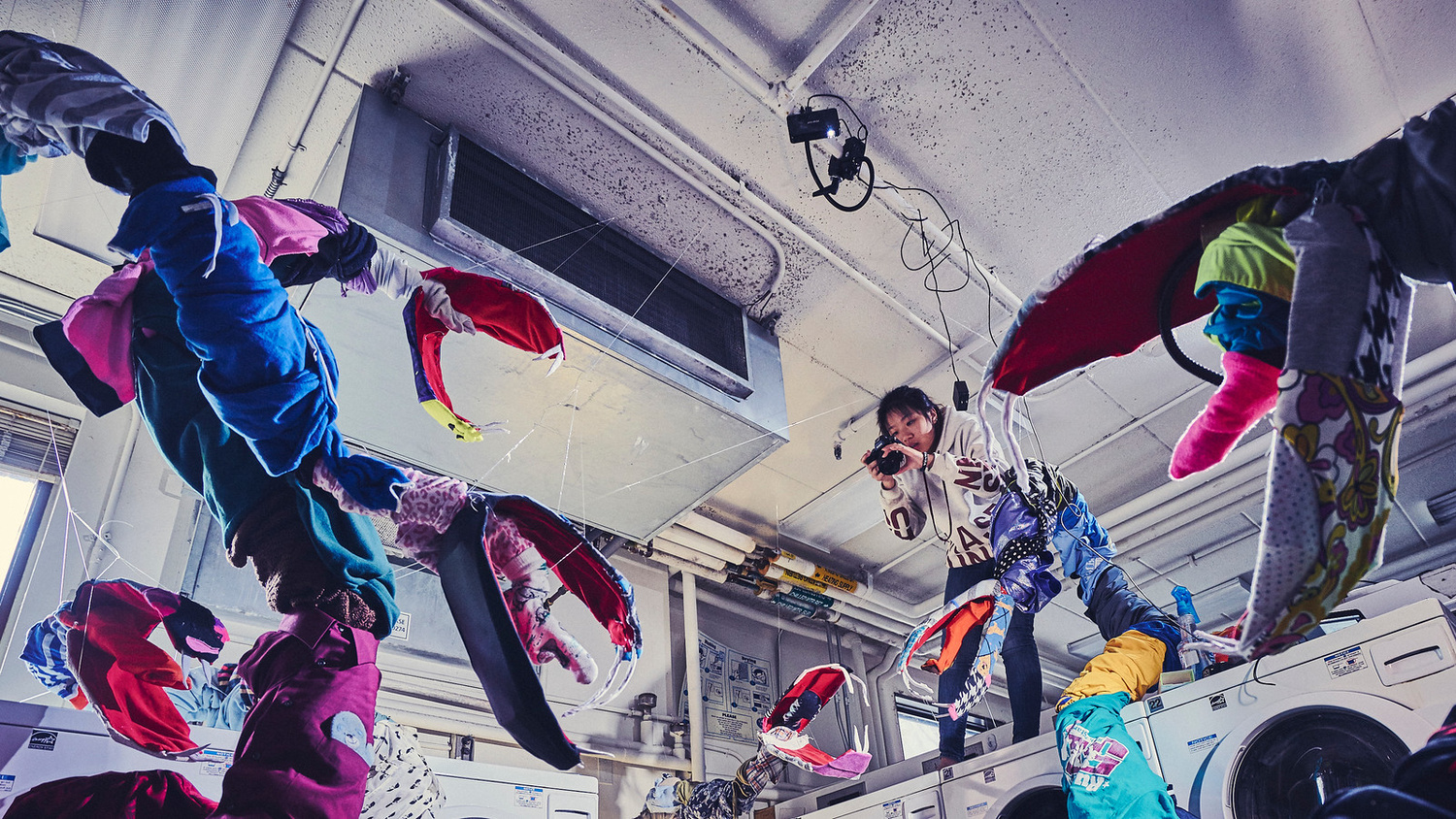 A mixture of interesting components made these images possible. Most notably the small pocket projector clamped on the ceiling to project the words "BEWARE" onto the floor to illustrate a message to the washing machine manufacturers. Small flashes were placed inside the washing machines to give a glow that would bring the monster's eyes to life. 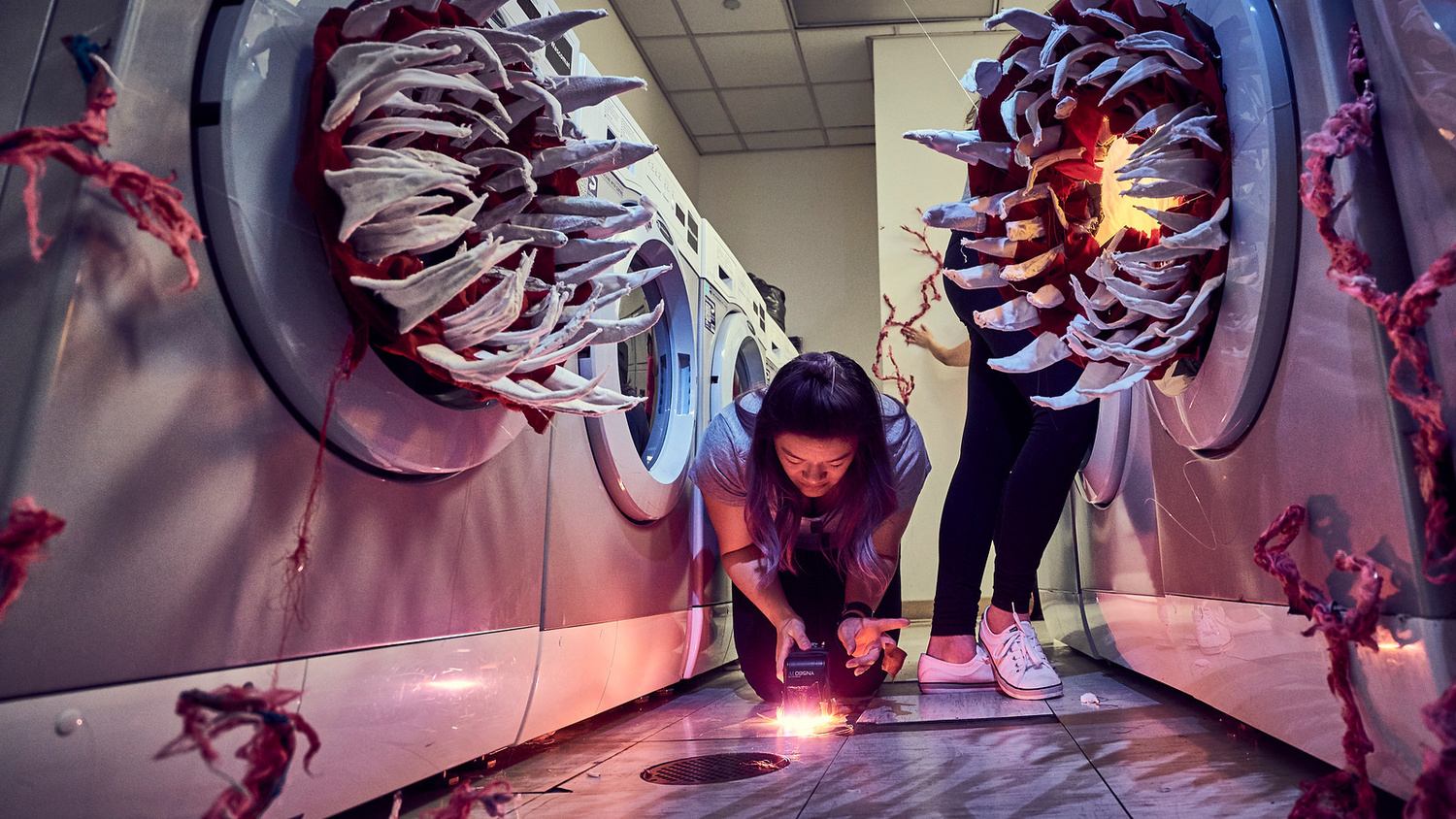 "Spread the word as far as possible." That's all Von Wong asks of you to help his cause. We need to challenge the already environmentally conscious corporations to make a difference. As a society, all we need to do is attract attention and ask to #FixToxicLaundry 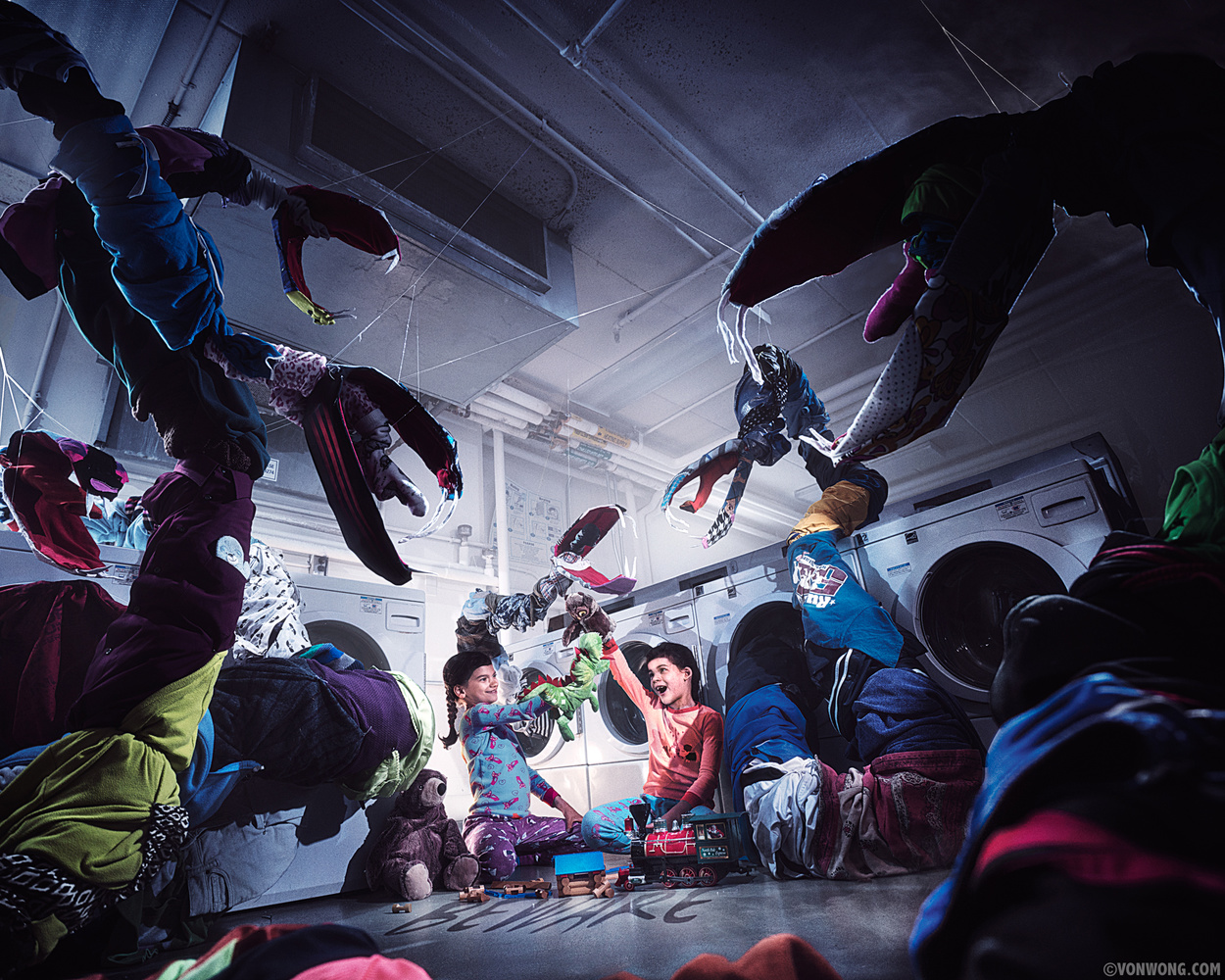 It only takes a few seconds, tweet one of the big manufacturers to take action on this issue that is a sleeping monster. You can do so here by signing your name and making your voice heard! 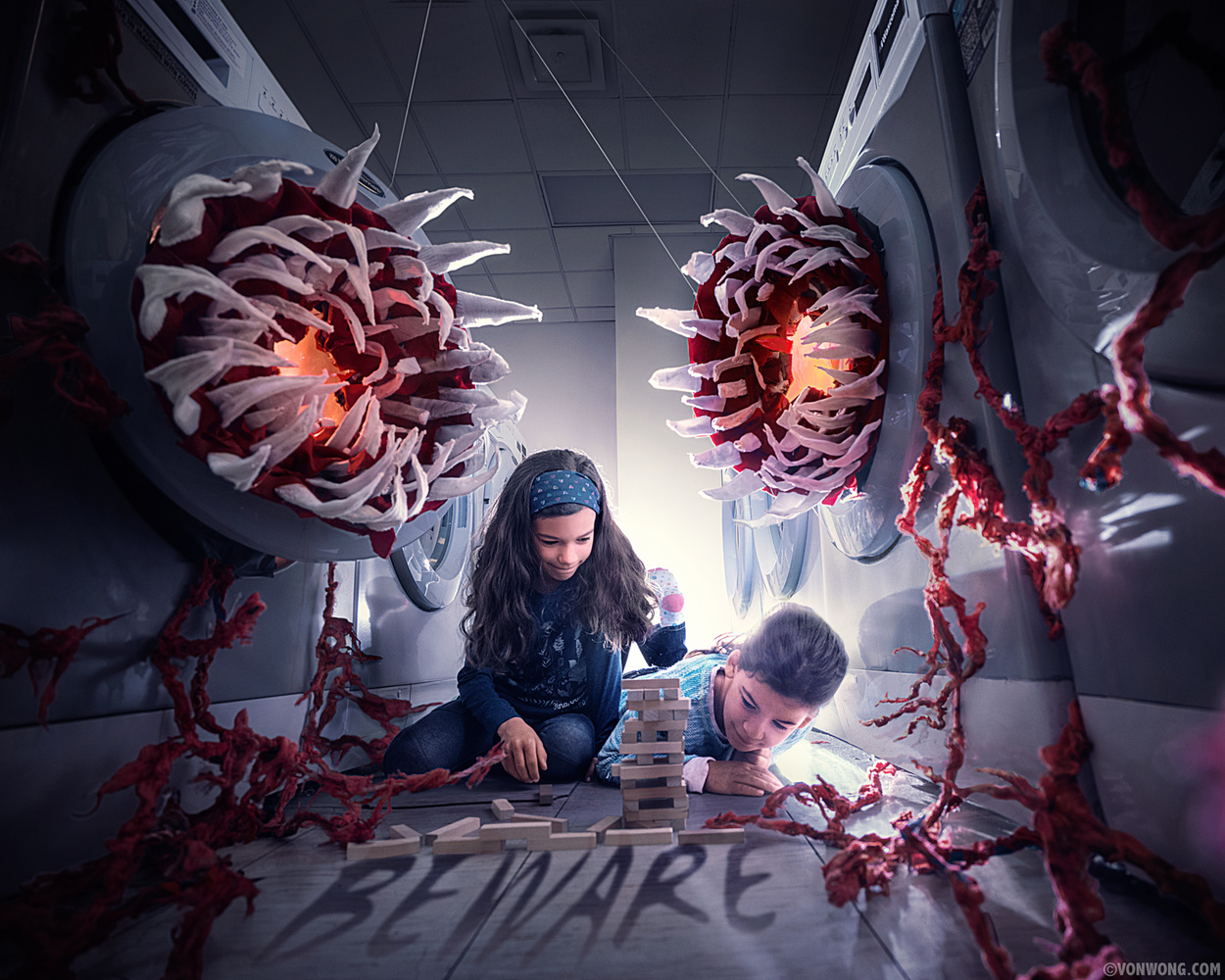 All images used with permission by Benjamin Von Wong

There are plenty of really good photographers out there to talk about here. I'm starting to wonder if he's paying to be featured here every time he goes overboard for simple pics.

Another interesting project from one of the most interesting contemporary photographers!!!

Thanks, Von Wong, you are a great inspiration!!!

Why do so much trouble at such an advanced time? When I've lots of advanced tools like Ps C4D, 3DMax, Maya etc.

VonWong could write a book on self promotion. Genius! I actually enjoy his BTS videos moreso than the end result. It's kind of him to raise awareness of plastic in water. Personally, I don't get that impression by looking at the final images here. But Kudos for succeeding in raising awareness of his brand :-)