When they are out at night, wanting to shoot some astrophotography, the trickiest thing photographers usually worry about is getting enough light to highlight the nightscape for it come out well-exposed in a shot. Some make use of the available light, some wait for the full moon, and some get creative with torch or car lights. But Paul Heran and Ryland West came up with yet another ingenious method to light up their landscapes: drone lighting.

Paul Heran and Ryland West have known each other for seven or so years when they met in Tahoe. Their passion for snowboarding was the bridge that brought them to photography. Fast-forward to 2015, they attended a photo show by acclaimed photographer and filmmaker Ethan Russell. From this encounter, Ryland saw that the fact that all of Ethan’s photos had an engaging story, further enhanced the meaning behind his images. The way he explained his artistic approach fueled Paul and Ryland to create images that would have a lasting impact on viewers.

Thus, "Highlight" came to life as a side project. They wanted to capture nightscapes in a creative manner, and as they put it, they looked for ways of bringing their different lighting techniques from the studio to outdoor landscape. Inspired by the technique of British photographer Reuben Wu, the two photographers found a way to light up in a consistent manner the foreground of their chosen landscape, by using LED panels mounted on a 3DR Solo Drone. The great advantage of this lighting technique was that it brought out more details while allowing them to selectively light up the parts they wanted viewers to focus on and add dramatic shadows to their images. And all that while shooting at a low ISO. This is literally the meaning of shining a new light on nocturnal landscapes.

Their aim in doing so was to incorporate more foreground elements to further the depth of each image. Paul and Ryland, like the dedicated photographers they are, spent days mapping out numerous compositions like the position and the shape of the Milky Way, the time of the night, the moon’s cycle, and the color of the sky. No doubt, it takes time. But the result seems to have paid off. 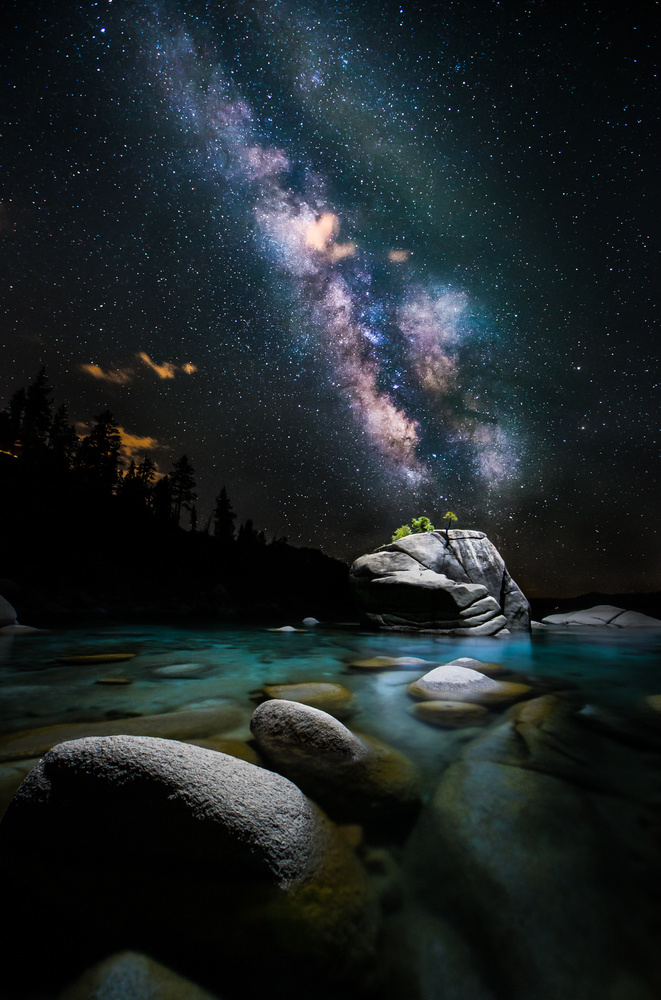 Bonsai Rock, lit by LED lights on a drone.

When I asked them if they had to adapt their light to a structure that would fit their drone, Paul and Ryland tell me that even though there are a few options for drone lighting, they decided to go all DIY. They got themselves a bigger LED panel as it was more suitable for their needs. However, they removed the 3DR gimbal and made use of the flat bottom of the Solo to mount the light panel with one battery. Because they wanted to maintain the use of the camera and the gimbal on the drone, they had to adjust the configuration to be removable. After experimenting with quite a few attachments to achieve this, they finally found a solution, and an inexpensive one at that. They used Velcro for the attachment and so far, they haven’t had any issues. 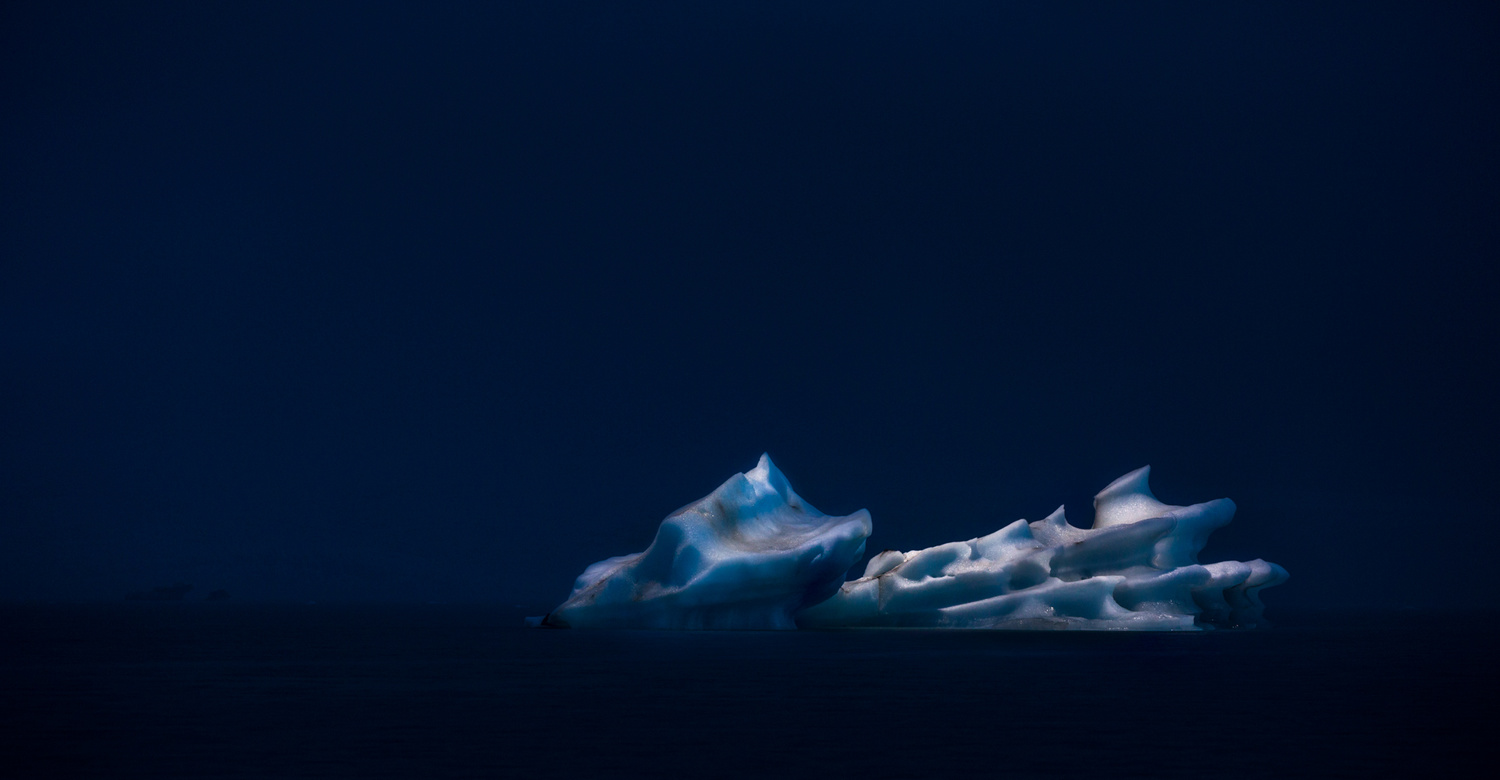 Glacier Lagoon, another image from the Highlight project

Seeing the amazing photos that the team behind Highlight have been crafting with the use of drone lighting, I did wonder if there had been any funny or scary events that happened on one of their adventures. It cannot have gone all smoothly at all times, especially when they were shooting the unpredictable Mother Nature. As an answer, Paul recounts one of their close calls:

At Weber Falls, we eyed a composition from down in the river bed, between two narrow canyon walls, set up the shot, and took off with the Solo. Being a pretty windy night, the Solo was battling with wind, and the shots were taking a bit longer than expected during flight. With the right shots to make our final exposure, and battery levels dwindling quickly, we decided to bring the Solo back down for landing. The winds picked up and forced the drone to stay up in the air so the Solo wouldn’t hit the narrow canyon walls. At this point, critical battery levels were flashing all over the flight control screens, and Solo tried to land itself. The only issue with that, was that we were standing barefoot on unstable rocks in a river! Thinking quickly, I paused the auto-pilot and aimed the Solo directly over our heads and prepared to use a catch technique that I had only just recently learned. With less than 5% battery left, I yelled to Ryland to watch out for the Solo to fall out of the sky. I had never flown with battery levels this low, and I didn’t know how the copter would react. With eyes fixed on the Solo, Ryland and I were both ready to try and catch the Solo at any moment to protect it from falling into the water. As the battery level on my monitor finally hit 1%, I caught the Solo in my hands and brought it down safely. We both breathed a sigh of relief and screamed out in excitement as the Solo would live to fly another day. 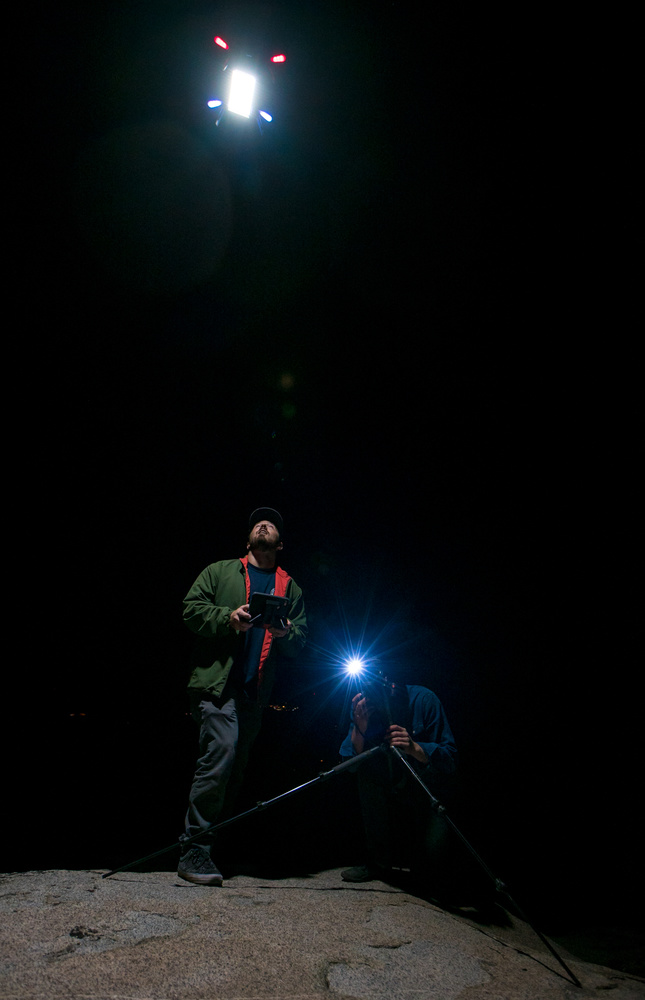 While this was one of their closest calls yet, one of their best moments happened on a trip to the Icelandic coast. Paul and Ryland tell me that they had been up for more than 24 hours, traveling and waiting for the perfect moment to happen for them to photograph what they came for. Exhausted, they still managed to stay awake to witness the Aurora Borealis light up one massive arch outside the town of Hellnar. Their drone flew while purple flashes clashed against green and allowed them to capture yet another stunning image for their Highlight project. Good things definitely happen to photographers who are patient, who stay dedicated to their craft, and find creative ways to keep the good work coming. 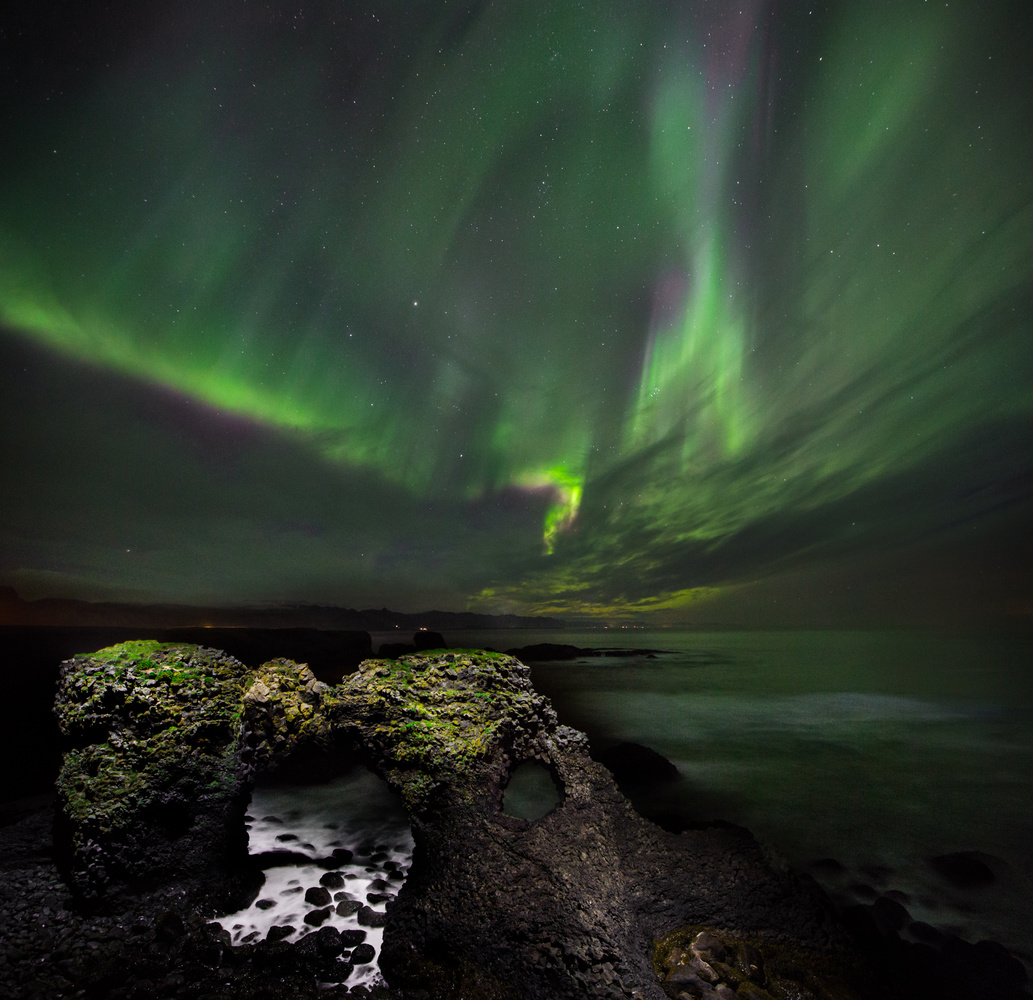 Hellnar, a photo taken on the coast of Iceland 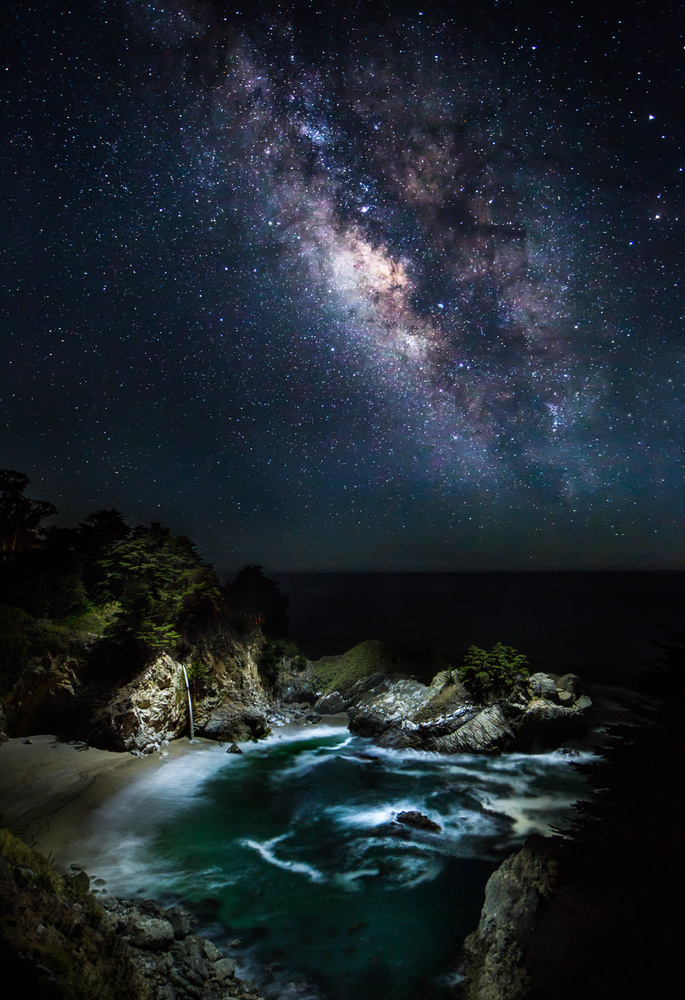 McWay Cove, from the Highlight project.

And if you want to see more or learn about Highlight, Ryland and Paul have made a quick behind-the-scenes video of the above shot take at McWay Cove:

You can find out more about Highlight here.

And you can see more about Paul Heran and Ryland West on their respective websites:

Images used with permission of Paul Heran and Ryland West

Operating a drone in the hours of darkness is illegal in NZ. What's the limitations over your way?

In my country Mauritius, you can do it anytime. No time limitation. However, I suppose the guys from Highlight, can.

What lenses were used and camera settings in these photos?