Presenting 'Glory': A Photo Experience That I Surprised My Supporters With by Delivering to Their Doorstep

It’s time for something different. Ever have that great idea, but you may just let it fizzle away? Me too. But this one wasn't getting away.

Firstly, because I wasn't going to let that happen, but it also wouldn't escape me. With those two forces and a thirst for something new, turned into a project which would eventually become my greatest creative challenge so far in my career.

Growing up, I would collect newspapers. Some of my most cherished possessions growing up for me are the newspapers of special moments that I’ve kept along the way. Whether it’d be monumental moments in sports, mornings that I would be in the newspaper, or those days that changed the course of history. I would keep them in a time capsule that I call “the vault”. There’s something special about these newspapers. They’re timeless.

Talking about this in a casual conversation with a client spawned this into a vision that wouldn’t escape me.

A newspaper experience that I created, produced and designed to deliver to the people. Those who support my work, have supported me along the way, and those who inspire. Rather than something to scroll past, I sought to create a page that my viewer can turn. 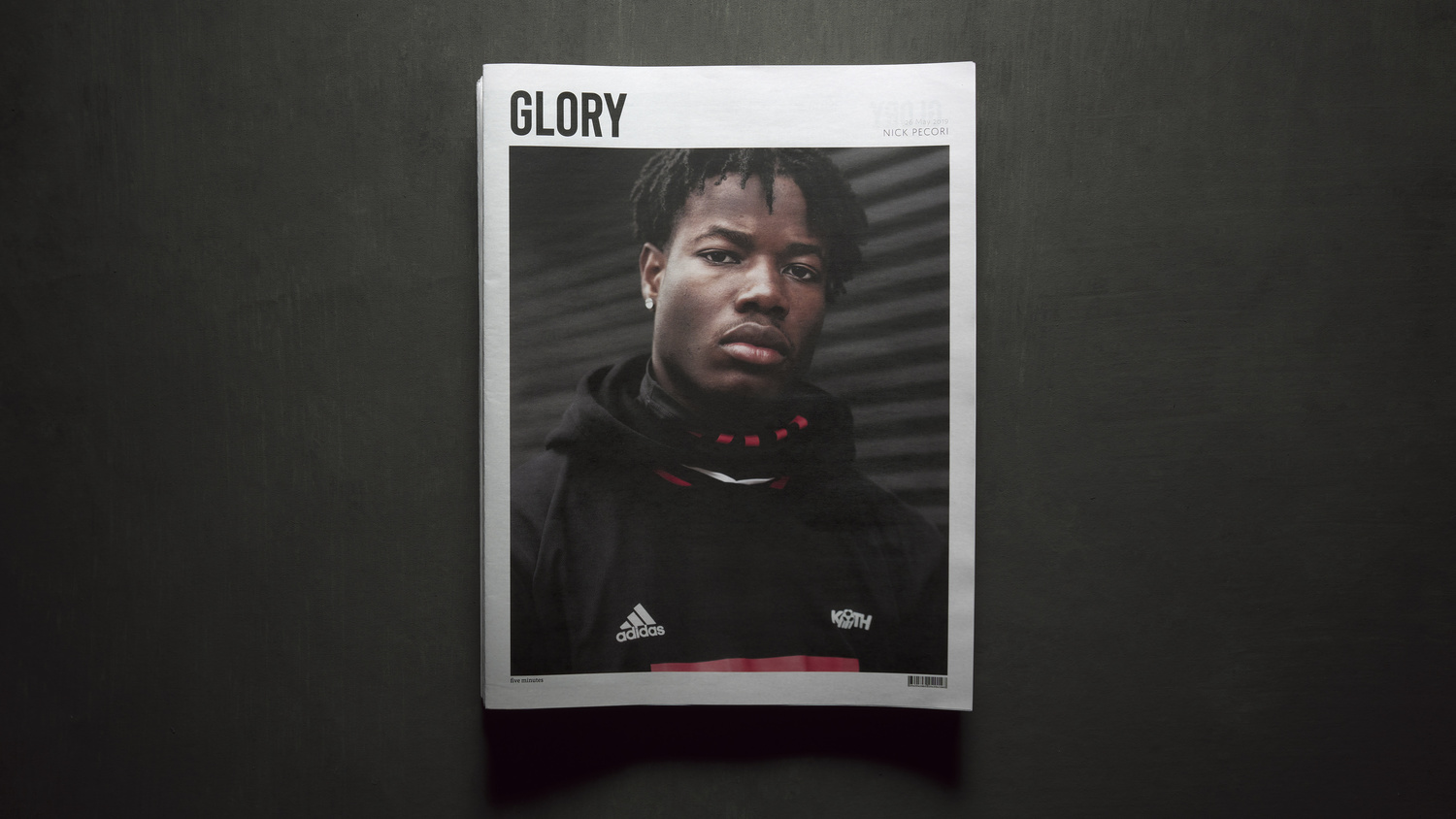 "Glory" is a personal photo project that was printed on newspaper. The piece was packaged in custom packaging and delivered to supporters much to their surprise.

Glory is a photo series that tells the story of one of the most recognized sports symbols in the world, Manchester United Football Club. Printed on newspaper, the series uses all three kits of the 2019 season in three different scenes to illustrate this. The concept was carefully designed to create a perfect storm of brands, fashion, and of course, sports.

why I decided to create a newspaper

Three Colors. Across The Globe.

Every season, Manchester United, who is partnered with Adidas, release their three kit (jersey) designs with their own colors and own story. As a supporter of the club, it was the first time in a while that I really liked all three colors, designs, and the story behind the design. From there I decided to produce three separate photoshoots for each individual kit design; each telling their own message. But it didn't stop there, these colors needed to be shot in appropriate areas across the world.

The shooting and design process took place on-and-off from October 2018 to May 2019. The series features images shot in Manchester, Miami, Tampa, Fiji, and Tonga. 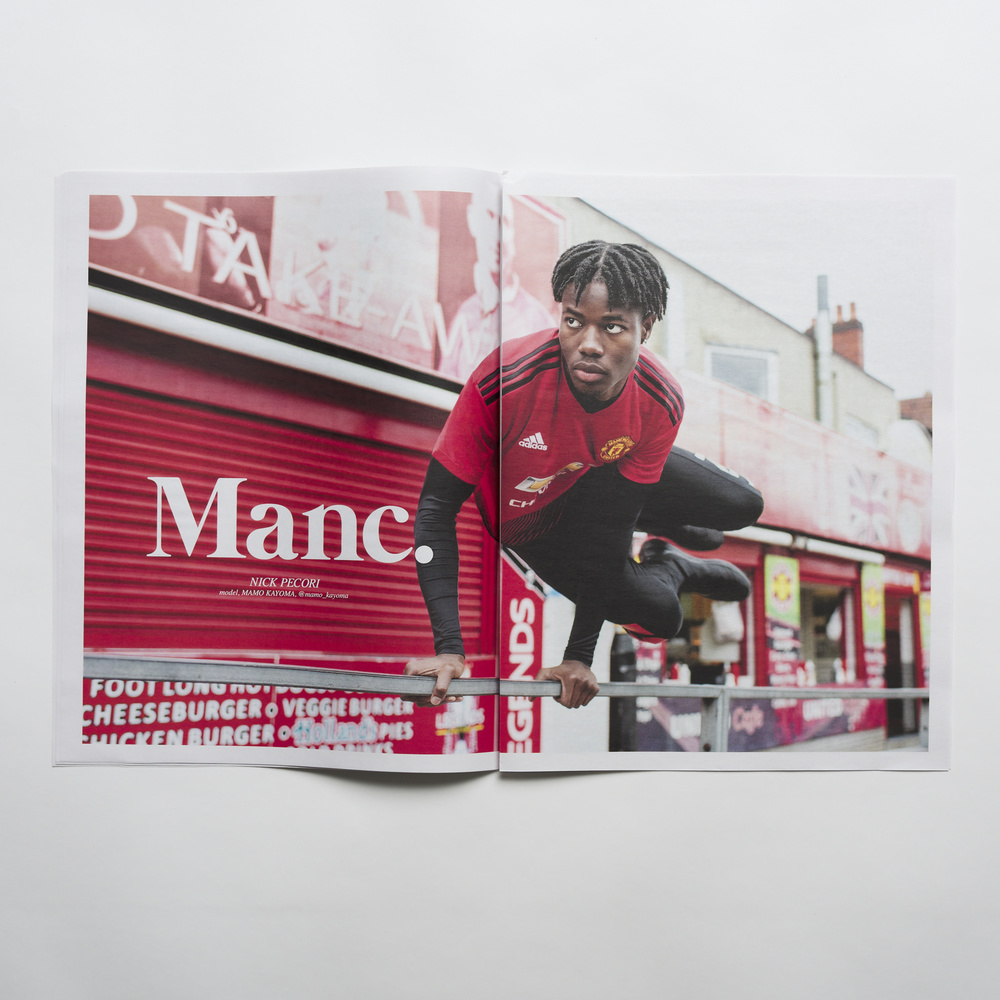 Let's start from the very beginning of this photoshoot and how it unfolded. This shoot was full of luck and tight timelines. Long story short, it wasn't until a month prior that I finally decided to go forward and booked the flight. With that time crunch, I had limited time to source sold-out fashion pieces, finding the perfect model, and actually producing the shoot.

Fast forward to shoot day, everything somehow worked out. We jumped off the train from London and shot with our model on Sir Matt Busby Way, just outside Old Trafford, one of the most historic grounds in European football. Full of cafes and vendors draped in black and red, the way was a perfect setting to photograph the club's home colors.

The weather was thankfully overcast (did I mention it was freezing?), which kept it authentic to a typical day in Manchester. 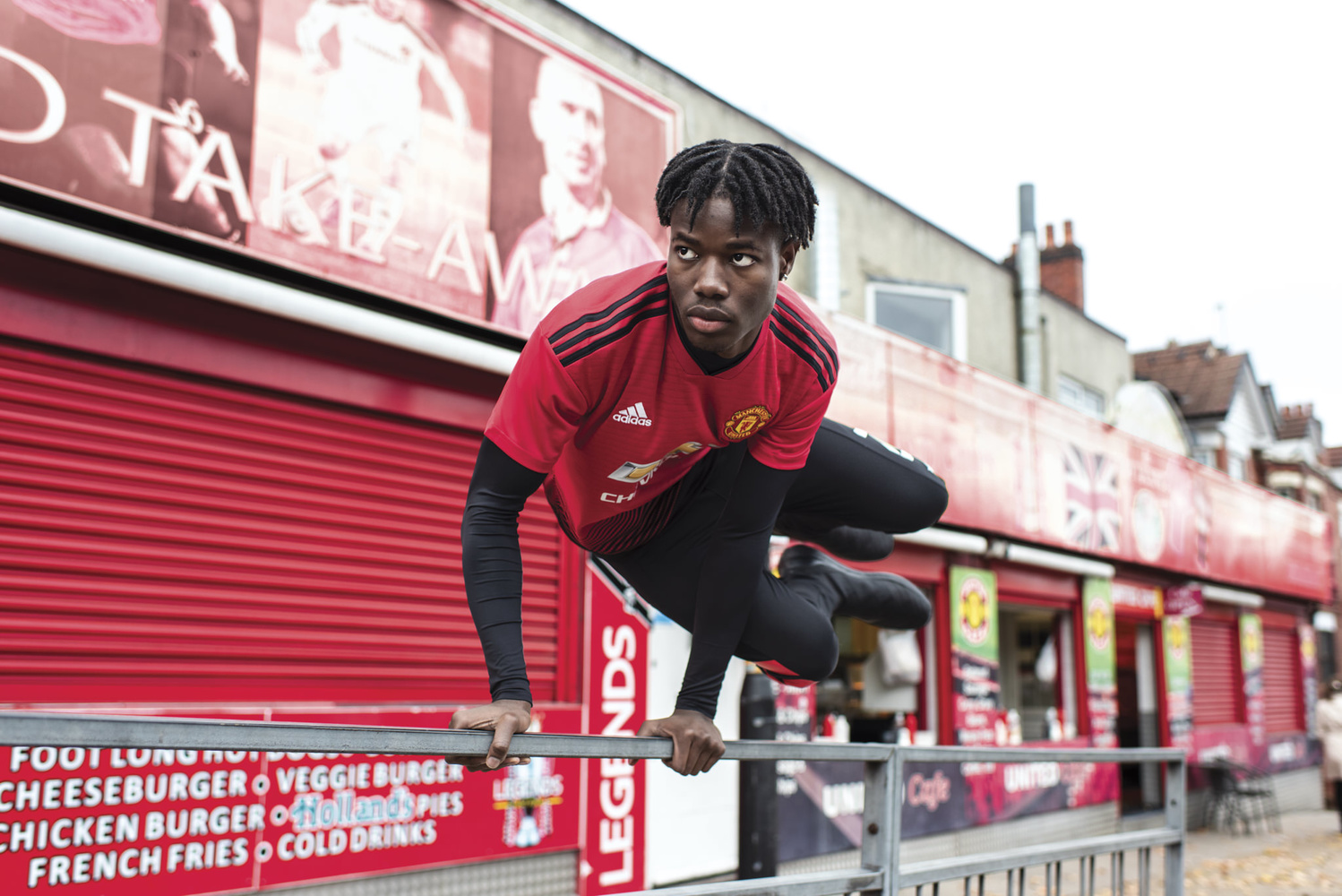 Along with the home colors of Manchester United, we paired the Kith Cobras from the Kith x Adidas Collaboration. The Kith Cobras, are a fictional team in the collection that features black, red, and white colors; that matched perfectly. 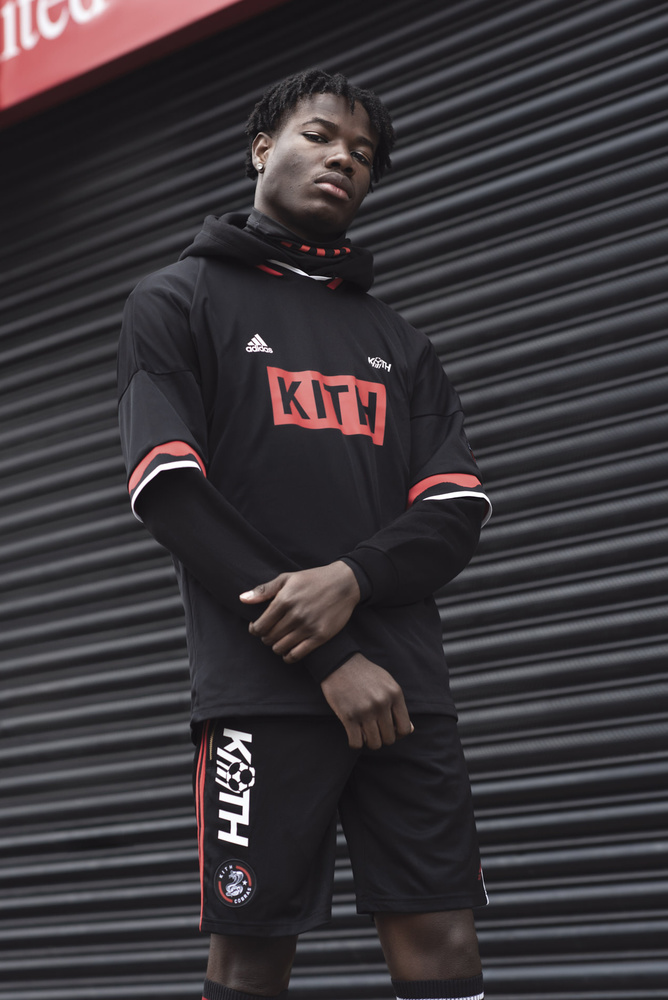 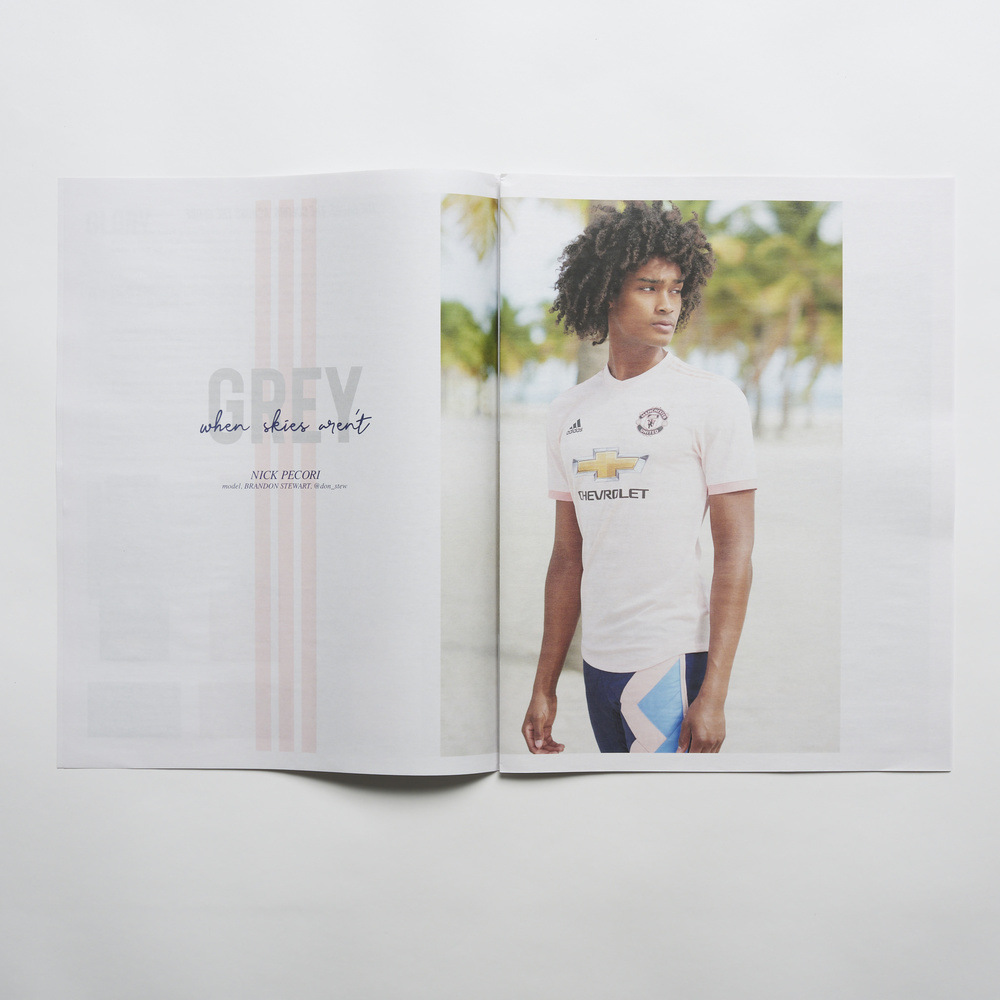 When Skies Aren't Grey is a play on words from a famous United chant "You Are My Solskjaer" where you can find the lyrics "you make me happy, when skies are grey". In Miami, the skies are anything but. 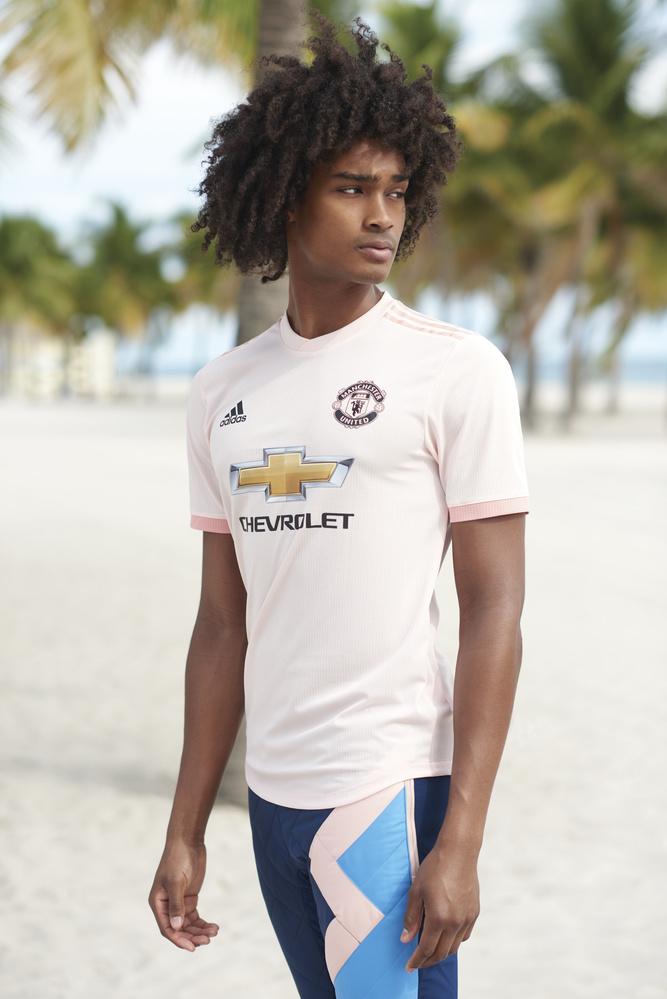 Representing the pink away kit for Manchester United, South Beach was a fitting choice to pair. The shoot consisted of a mixture of South Beach rooftops, sidewalks with modern backdrops, and the sandy beaches of Biscayne. Paired with the pink kit was the Kith Flamingos. Similar to the Kith Cobras, is a fictional team based in Flamingo Park, Miami.

This shoot was the exact opposite of Manchester, in the sense that we were constantly playing games with the hard light and soft light going in-and-out with the cloudy skies. Opposed to overcast skies, hard light is less forgiving and you need to be very careful how the model is shaped from that light source. Luckily with the model, Brandon, his hair sometimes would act as a shield from hard light on his face.

Shot in Fiji, Tonga, and the Gulf of Mexico. W was by far the most ambitious shoot of three and tells a special story. The third kit for Manchester United is navy blue, but what it's made out of is very unique. 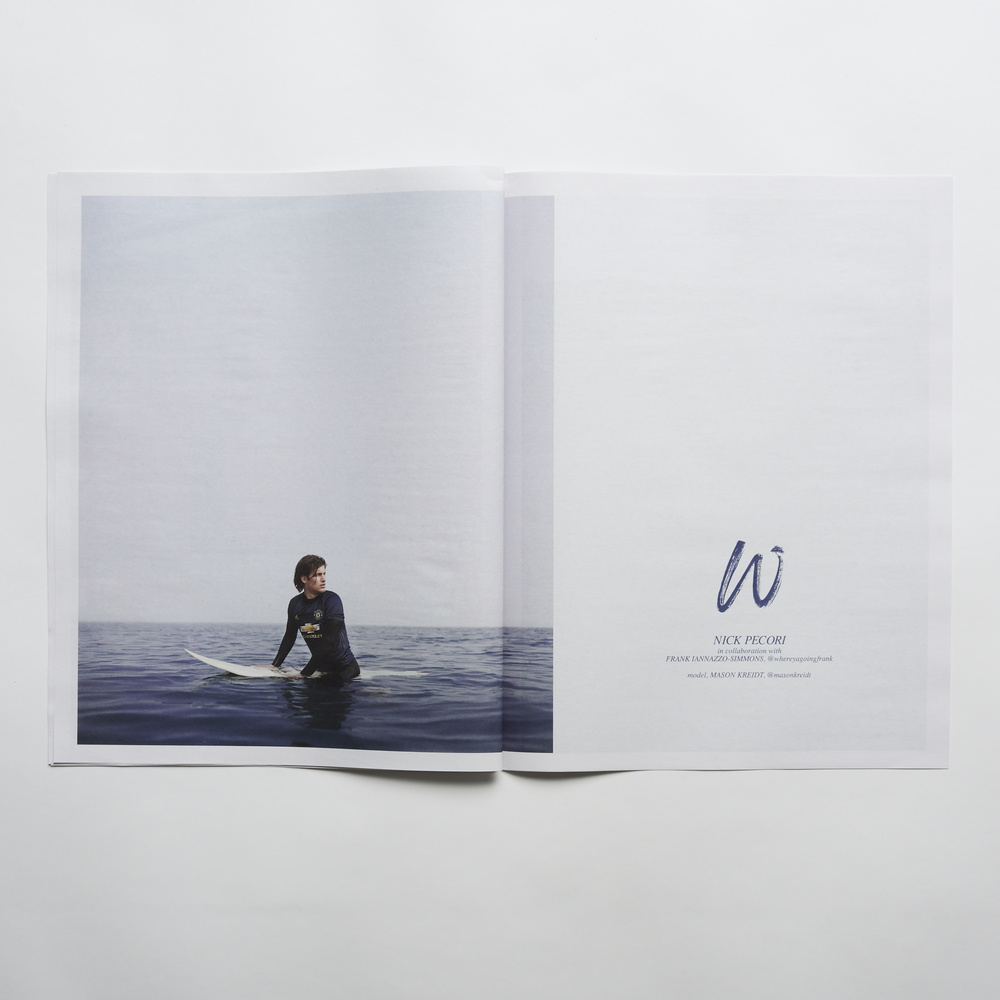 Parley For The Oceans™ is a brand that encourages artists, scientists, authors, filmmakers, etc. to use their craft to raise awareness for marine pollution. Adidas and Manchester United teamed up with Parley to create the third kit. The shirt is made completely of recycled plastic. To tell this story, the shoot absolutely had to take place in the ocean.

The shoot took some time to plan, we finally arranged the perfect model willing to dip into cold, 55-degree water, a boat, and most importantly a vision of what we're looking to shoot. We planned to shoot a surfer in the ocean wearing nothing but a wet suit and the shirt. 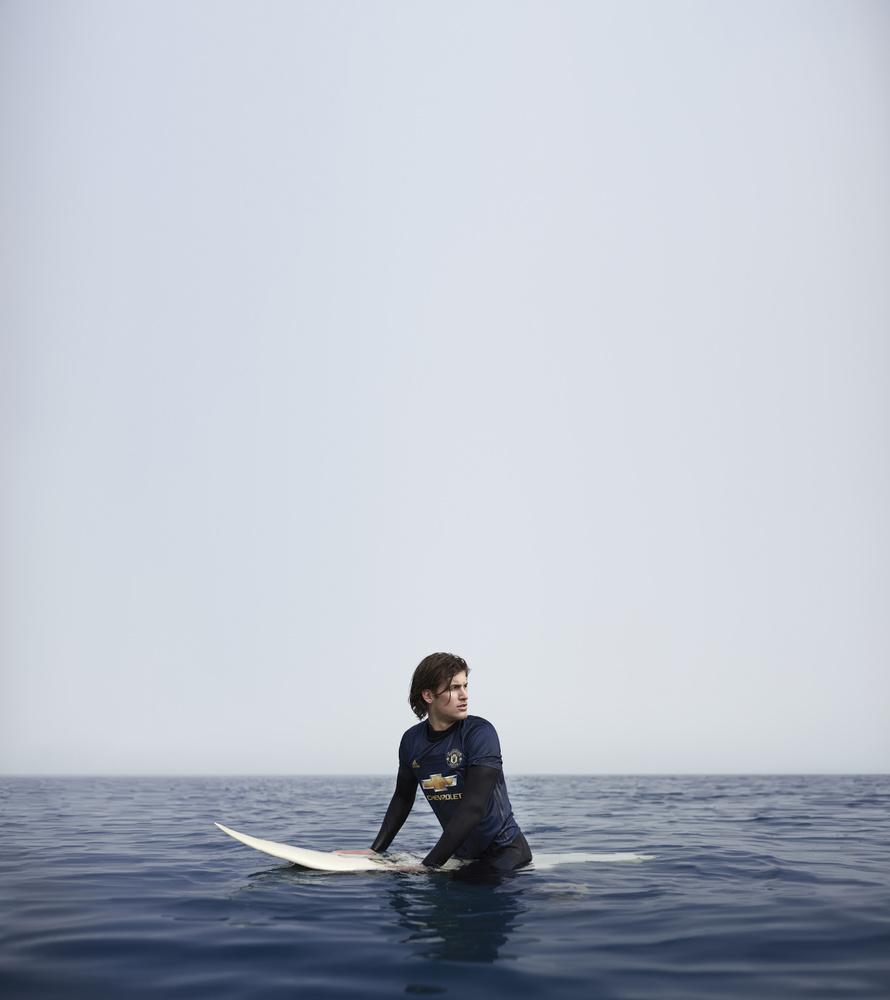 Shot using 100% natural light. At first we were hoping for sunny skies, but after embracing the fog, I loved the a hint of an eerie feeling it gave the photograph.

Shooting in the morning, there was a thick fog, a very thick fog. We couldn't see 10 yards in front of us. At first, I was disappointed that we didn't have sun. But after embracing the fog, I fell in love with the eerie and minimal feeling it gave the photographs. 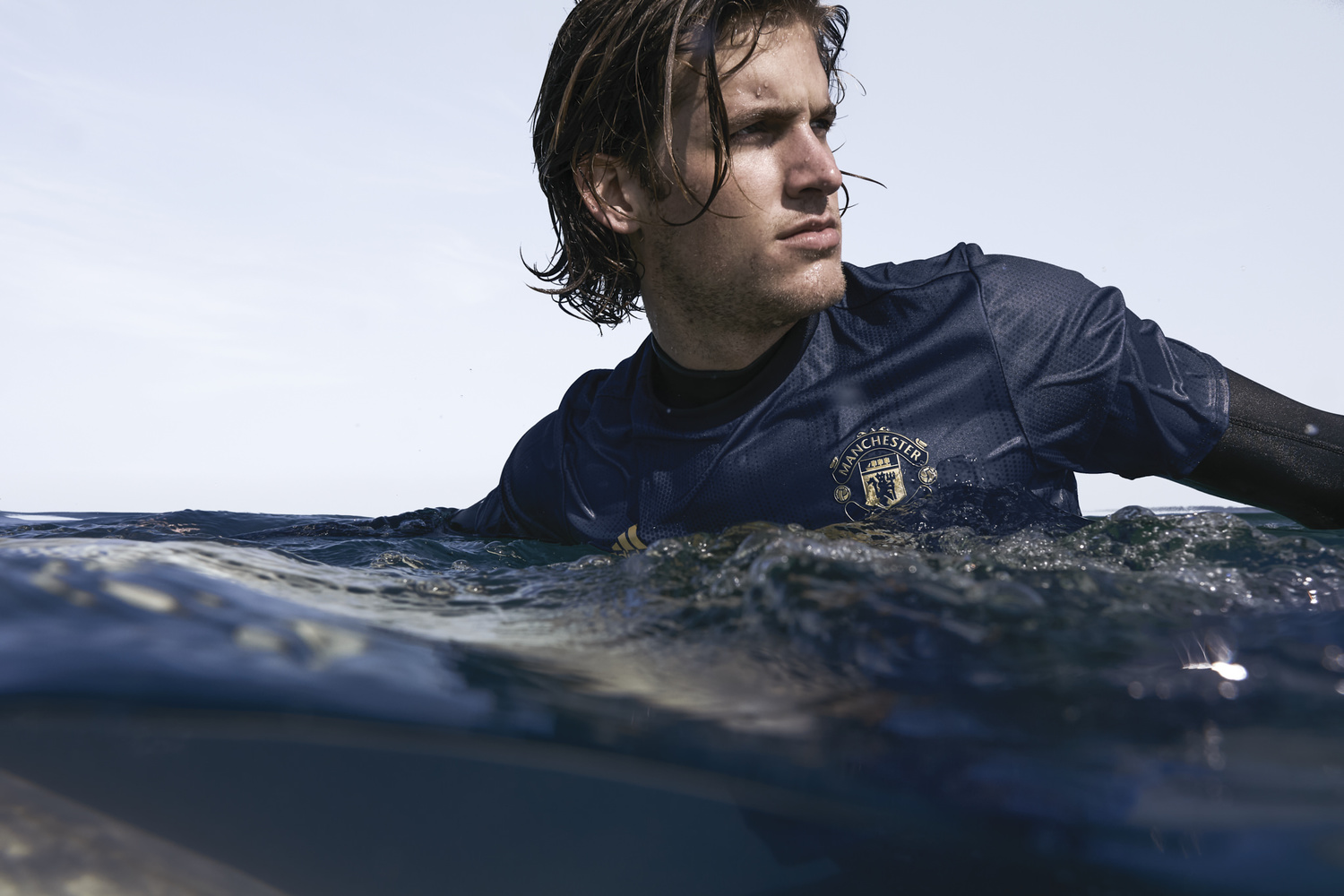 Adidas and Manchester United came together with Parley For The Oceans™ to create a jersey made completely of ocean recycled plastic materials.

We hit a minor problem at the beginning, the surfboard would sink easily. So with some quick thinking from our model, we tied life jackets underneath the board with fishing line to make it more buoyant. It worked like a charm and we were smooth sailing from there. 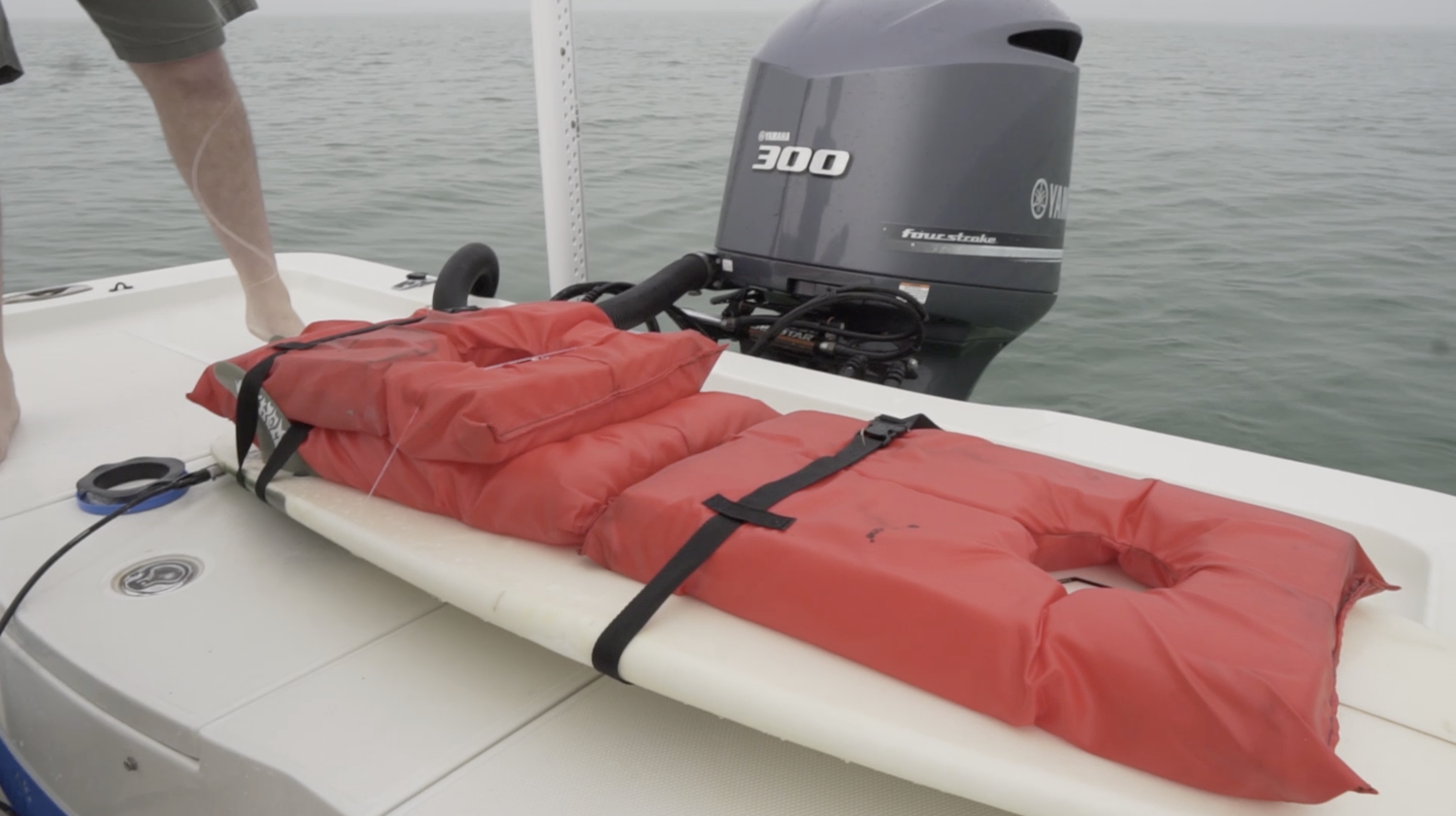 You're probably wondering when Fiji and Tonga come into the equation. A great friend of mine, Frank Iannazzo-Simmons, is a travel photographer that collaborated photographs from his recent Oceania trip. While diving with humpback whales, Simmons was able to capture these fantastic photographs to complemented our shoot perfectly. 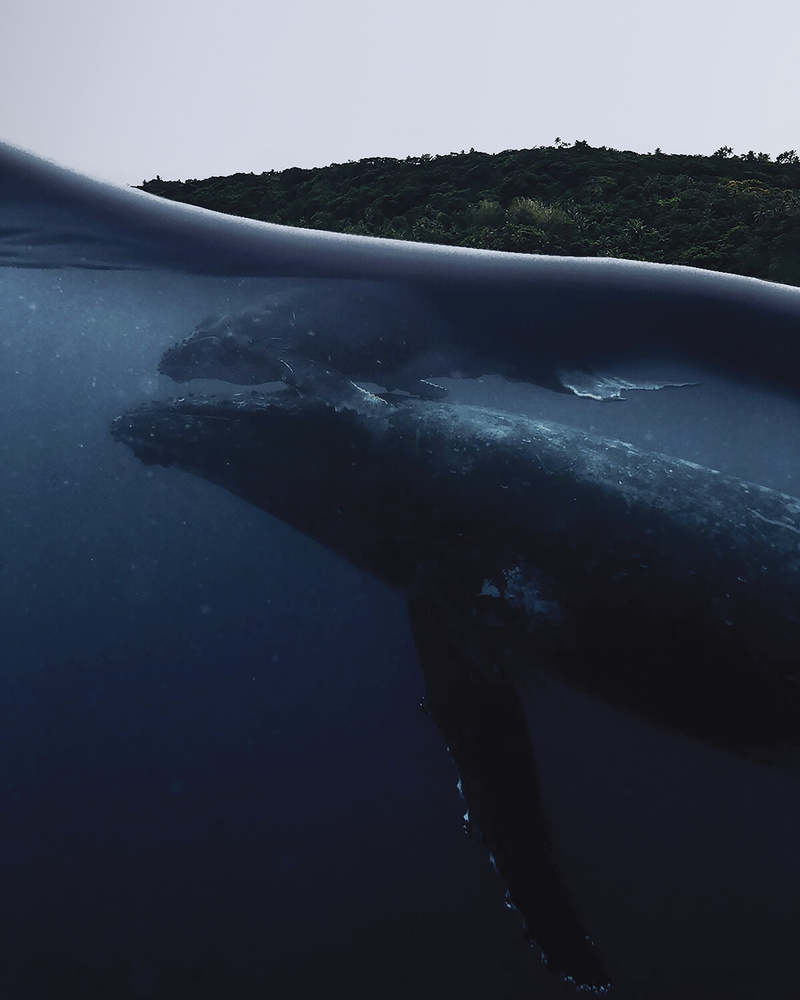 Midway through his trip, Simmon's water housing malfunctioned and he was out of a professional camera. This shot happened to be taken on an iPhone.

You may be thinking to yourself, experience? It's just a newspaper print. It's much more than that. There are elements of surprise, packaging design, the piece itself, and bridging the gap between traditional and digital media.

Friends, family, and supporters received their packages much to their surprise, on May 27th, 2019. The first business day after the 20th anniversary of Manchester United's Treble season (May 26th, 2019). Arguably the best season in their history. 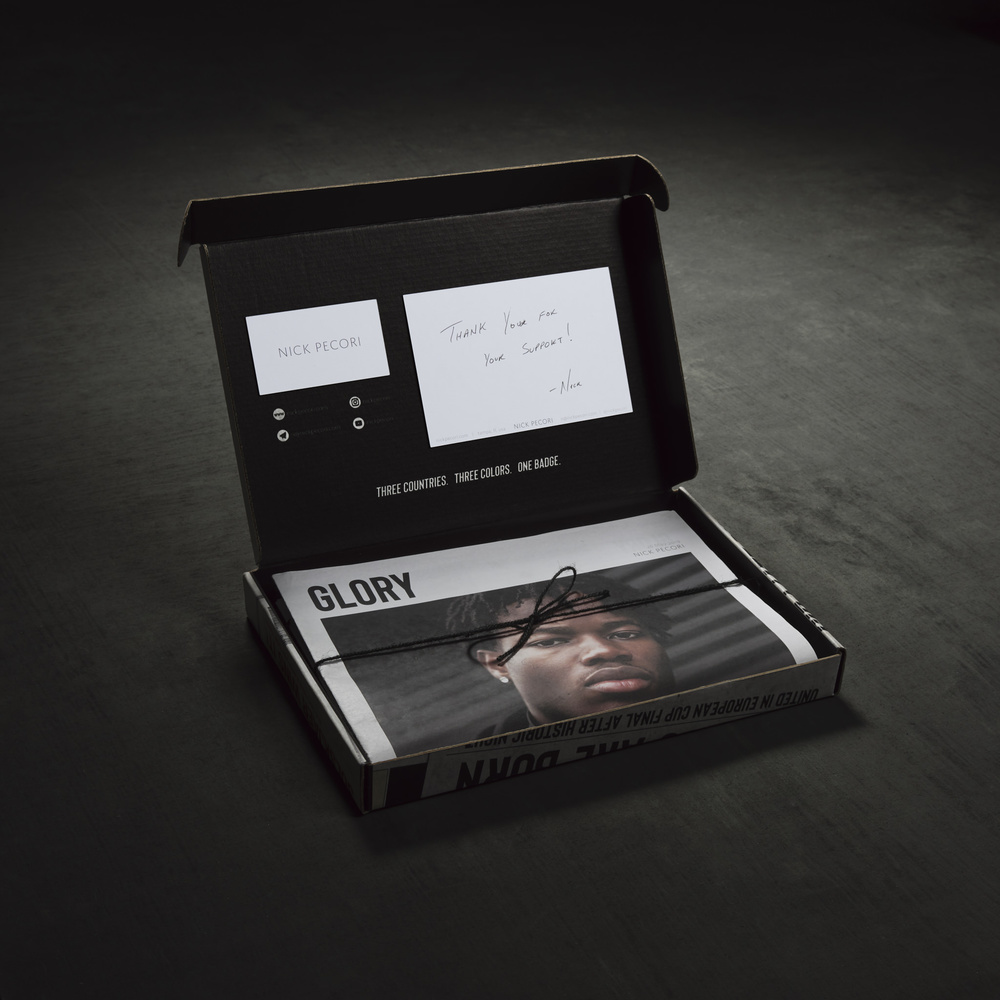 Before seeing the newspaper, they were greeted with special, custom packaging giving them quick context of what they're about to open. The top side stated: "Nick Pecori Presents". On the backside was recreated newspaper headlines of Manchester United highest and lowest points in the club's history.

Once opened, each package contains a personalized, handwritten note thanking them for their support among other things.

The newspaper was printed digitally on a 24-page tabloid layout. There were only 150 copies made.

The newspaper cover features a portrait shot during the Manc. series in Manchester. Once opened, you're greeted with blurbs on what the viewer is about to see and why it was produced. From there, you're walked through all three series.

On the last page, the viewer is shown a couple of QR codes that lead them to exclusive behind-the-scenes content on how the project was produced including blogs, videos, and photos that didn't make the cut.

Why I Created Glory

A year or two ago, I wrote a rather controversial article regarding vanity magazines in today's age. The emphasis was to create your own magazine, tell your own story, and tell it the way you want it to be told. Because the only person who truly understands it is you. That's what this newspaper is about. I discovered a void and was rather unsatisfied how people viewed my work. Instead of double-tapping and scrolling in mere seconds, I sought to create a piece that my viewer could hold, feel, and look at. It also wasn't about how many viewed my work, but who looks at it and who values it.

Spread across the web you'll be able to see different content on my channels. To see an even more in-depth look, take a look on the Glory webpage or follow along as more content is released.

A project similar to this was submitted to me by Shutterfly.

Hi. Grammar Police here. Please alter the headline by adding the word "with" after the word "supporters." Otherwise it's disconcerting, and that is something up with I shall not put.