The Difference Between a DSLR's Viewfinder Autofocus and Live View Autofocus

Most photographers use their cameras on a daily basis with little or no thought to how it functions under the hood. For the most part, this makes sense, mastering a tool doesn't require understanding exactly how it functions on the most intimate technical level. There are, however, aspects of camera operation that a cursory knowledge of can aid in being better equipped to address unexpected technical or mechanical issues. Given that autofocus can be finicky, it quickly becomes one of the critical aspects of your camera that you should take the time to learn about.

The first and most important aspect of autofocus in a DSLR that needs to be understood is that each DSLR camera has two distinct autofocus systems. When focusing through the viewfinder you are using a technology called phase detection while activating live view switches over to a system based on contrast detection. This happens because contrast detection is not possible unless an image is actually being projected on the sensor itself while phase detection can function without the camera's sensor being part of the operation. Understanding the difference between these type of autofocus can help you make the decision of which autofocus mode is a preferable choice in each given situation as a shooter.

Phase detection autofocus functions using a pair of micro lenses to compare light flowing through opposite sides of the lenses. It then aligns those two images on top of each other. Due to the images being drawn from a different position on the main lens the pair of images will be slightly different. However, the point of critical focus will be perfectly aligned. If this point of critical focus is within the bounds of the active autofocus point, the camera is in a focused state. Because of the nature of this system, focus points cannot reach the edge of the frame as the analysis becomes more difficult as the focus point is moved further from the center. As far as I understand it, it's impossible on the edges. Phase detection requires incredible precision in order to function correctly and even the slightest misposition of the micro lenses relative to the main lens can cause the system to become inaccurate. For this reason, all modern DSLRs include an autofocus micro adjustment tool built into the camera that allows users to configure their autofocus to be perfectly aligned for each lens in their collection. Phase detection autofocus has had an incredible improvement over the years and continues to further improve as time goes by. Leading DSLR companies continue to add more and more autofocus points that creep closer and closer to the edge of the frame while accuracy, especially in low light, continues to rise. 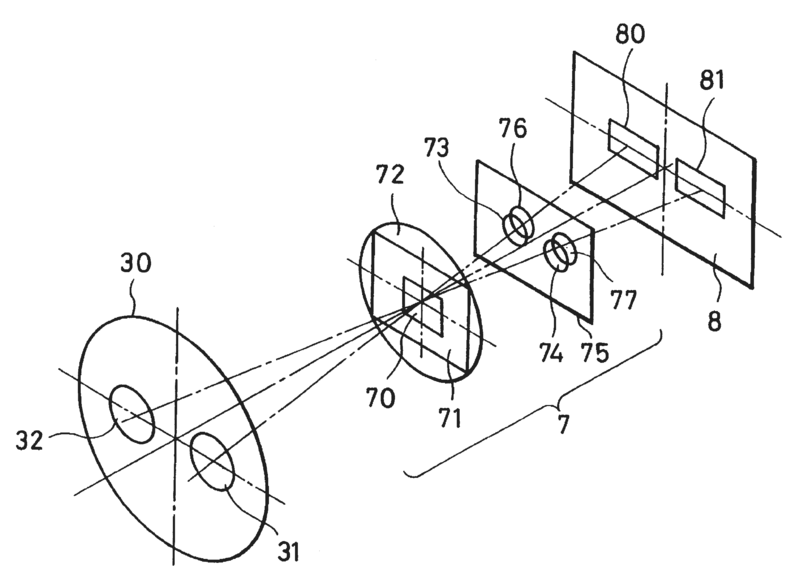 An excerpt from the original patent application for Phase Detection autofocus showcasing the two split images travelling through the focusing system.

Contrast detection autofocus, while comparably complex in theory, is actually much easier to understand in layman terms. When autofocusing in live view, a DSLR records images from the sensor in real time that it then analyzes for the intensity of contrast between adjacent pixels within the bounds of the focus point. If the contrast intensity reaches a required threshold, the camera is in a focused state. Because contrast detection analyzes an image from the sensor itself, the analysis can be done on any area of the sensor without difficulty. For this reason, live view autofocus can target even the far corners of the frame. This also allows contrast detection autofocus to, in theory, be more accurate as it is analyzing the actual image instead of trying to determine whether the camera is focused or not without actually looking at the data that will be recorded by the sensor. For this reason, contrast detection never requires autofocus fine tuning and tends to consistently deliver accurate focus so long as there is sufficient light for the sensor to record an image that can be accurately analyzed. As a side note, this is why you should always fine tune your autofocus using the viewfinder, not live view, as autofocus fine tune will not have any impact on your live view focusing system.

The primary difference, at least for DSLR users, is speed, reliability, and accuracy. As contrast detection requires switching in and out of live view between each shot, focusing using live view can be frustratingly burdensome. Meanwhile, the slightly less accurate phase detection system will allow for far more agility in use at the cost of reliability and accuracy. It is also worth noting that when not using a tripod that most photographers are more stable when holding the camera to their face rather than with outstretched arms to be able to see the LCD which means in certain situations the added camera shake may easily outweigh any benefits achieved by leveraging contrast detection. Ultimately, there is no right answer for every situation, rather it is up to you as a photographer to practice and be familiar with both system so that you can make an educated decision while shooting to decide which autofocus system is superior in your given situation.

"As a side note, this is why you should always fine tune your autofocus using the viewfinder, not live view, as autofocus fine tune will not have any impact on your live view focusing system."... Ummmm... This is a little confusing, I'd just say use whatever instructions are provided by your camera manufacturer or third party fine tune focusing assist. Or maybe you were saying that fine tune focus adjustments on more advanced DSLR cameras only adjusts the phase detect sensor which will impact your shots when using an optical viewfinder? Did I just manage to make that a more complicated statement?

It's the second statement. Fine tuning only works on the OVF PDAF sensor, since it's separate from the imaging sensor. The imaging sensor has CDAF or OSPDAF built in at the focal plane, so it will always be accurate in Live View, as long as it can keep up with the subject.

I wonder if this is related to my experience with my 85mm, 6D combination's very poor keeper rate... I've never used the micro adjustment tool on any of my cameras since it's usually not a problem, but that combo is so lousy, I [just] might. Asking seasoned mentors, I was taught to make sure to use the correct auto focus point first, and if shooting wide, don't be too far from the subject (no refocusing obviously). My experience, up to now, the advice is helpful, but not by leaps and bounds. Maybe using the micro adjustment could get that ratio to the leaps and bounds amount of improvement. Thx!

Shoot a subject wide open through the OVF, then again via Live View. AF for each. If the Live View image is significantly sharper, the lens needs to be fine tuned for OVF use.

This is what I hated about DSLRs the most. Worrying about fine tuning each and every new lens, and if they would be within tolerances to even be able to be fine tuned (had a couple lenses that weren't; big issue).

Ya I'd second this annoyance, especially if the fine tuning changes depending on zoom for a zoom lens, at that point you are kinda hooped. ;)

Okay, good stuff! Thanks for the input, I didn't know that.

>> I wonder if this is related to my experience with my 85mm, 6D combination's very poor keeper rate...

Read the Autofocus Realities article at lensrentals.com. Unlike this article, it covers DSLR competently. The problem with the 6D at short dof is that the phase detect system can work out the distance very accurately but lens element position can still be out of adjustment with some lenses. The 5Diii has a more sophisticated feedback control system for moving those elements, so it's more accurate. Otoh, liveview does bypass this problem.

Ahh, interesting. And yes, in fact using my mark III, I do get a lot of keepers even wide open. I'm going to check out the article. Thanks for the input, appreciate it.

Have you used the USB Dock and its more hardcore fine tuning software?

You would have to spend hours doing it... to top it off unless you have a profile that you can store, the adjustments you do in the body to optimize the sigma calibration will affect the next lens you put in... I am very very please with the IQ my D7200 gives me but because of this mess im seriously considering "upgrading" to a D500 with AUTO micro adjustment feature.

I've heard both the 18-35 and the 50-100 really struggle. Which is a bummer, I'd love to move to the D500 with just those two lenses as my primary kit. Would be a sweet little photo kit in theory but the AF woes for them keeps me full frame.

No I have not. From other people dock doesn't help. Its just super inaccurate which you can't really fix vs having just a front/back focusing issue. Focus is just all over the place. Though its not a big deal since all I do is landscapes. I was thinking about getting the 50-100 but the extra weight and money to buy new 77mm filters isn't worth it. I'll keep my 50 and 85 primes instead.

Makes sense, for me it would be replacing 70-200 F/2.8, about the same weight but getting me 1.3 extra stops of light. But reliable AF is a must have.

I use this to correct all my lenses and works great with Sigma lenses including the 18-35mm. Fstoppers did a review on this some time ago too. Cheaper than the Sigma dock but works with most if not all auto focus lenses not just Sigma.

the D500 has auto micro adjustment... you should be fine.

I believe I read this somewhere so please correct me if I'm wrong. One of the speed benefits to phase detection is that when the system is out of focus it knows which way to move the focus point based on where the two images are located. As a result the system can lock onto the focus more quickly. Using contrast detection the system has to adjust the focus in either direction before it can find the focus state thus potentially taking slightly longer to achieve focus.

That's the point of PD yes. But some CFD systems know this too - the more advanced Panasonics have can use a Panny lens's blur pattern to work out which direction to move in. None of them are as fast as a D800, but they probably are as fast as DSLRs in their price range and the technology is still improving.

The one point that seem to be left out here is the behaviour of auto-focus system in continuous shooting mode and single. In days gone by, I used to leave the setting to "C" to save time while shooting single frames only to find that the continuous auto focus system is still active.

"This also allows contrast detection autofocus to, in theory, be more accurate" Why all DSLR, real oldschool DSLR (Nikon, Canon, Pentax....) are more accurate and fast with ViewFinder focusing? Why Canon is good in liveview focusing and Nikon sucks?

It has two focusing systems and one of those two uses both contrast and phase detection AF. The article is implying that you can't have PDAF on the sensor, which is not correct. The only mainstream maufacturers that exclusively use contrast detection are Nikon and Panasonic.