Can Disposable Cameras Make You a Better Photographer?

There has been a trend lately on YouTube and social media of using disposable cameras. It's a fun challenge as you forgo so much creative control, but can it improve you as a photographer?

Most photographers would recommend that if you have never shot on film before, you need to give it a go. My first experience with film photography was inspired by a challenge a photographer had set where you go on a day out where you'd definitely be excited to take your camera with you, but then only take a film camera. There are a few fundamental shifts in the way you shoot. Firstly, settings become less guess work or trial and error, and more a careful procedure. What I found to be the most interesting, however, is the limited number of shots. That particular element carries across to this disposable camera trend.

Having a limited number of shots when you leave your house changes the way you act completely, or at least it did for me. Ironically, I found that I was more motivated to shoot more rather than less. If I have my usual mirrorless camera with me, I'm choose not to shoot a great deal and then when I do want to shoot something, I go to town on it. When I have a film camera with me, however, I notice shots I'd usually miss and then have to have an internal debate about whether it's worth one of my 26 frames.

Disposable cameras appear to be a more extreme version of the common film challenge, but I do think it can improve you as a photographer, or at the very least, snap you out of your haze of shooting without the traditional care and forethought that film required.

As someone who grew up in the film days (first SLR in '69) I can appreciate the challenge. You have a limited number of shots and there is little you can do with it afterward. You either get the shot or you don't. People have become so dependent on post processing that they don't always go for 'getting the shot', but merely are going for a framework to create a scene that never happened in post.

Many have lost the concept of capturing the moment.

And the dead horse gets another ride ...
'Firstly, settings become less guess work or trial and error, and more a careful procedure.' - Seriously? Any decent camera has exposure metering in, where would the guessing be? With this thingy I would simply use a mobile phone app. No guessing either way. Challenge yourself in whatever way you want (single focal length, whatever), just stop making some insta-stuff or some pseudo cult out of it.

No just a frustrated one.

This is just ridiculous and embarrassing. Skip the bragging and jump to 3:45 only to discover that this person has nothing to tell. This is a complete waste of time and an annoyance.
Go grab a Nikon F6 (with AF) or a Nikon FA (first camera with matrix metering, manual focus) and learn how it was, when a lot of us started photography in the film era. Disposable cameras have been existing years before these swanky youtubers were born.

Well... I strongly believe that only your skills can make you a better photographer- they and your own will to learn and develop them.But the gear can make your pictures look better along with the software you use to do post-processing. I mean, you can crop the picture in Paint or edit the portraits in Photodiva or do the whole photomontage via Photoshop- and these will be different levels!

I think it's a great idea and a fun project. I set myself an alphabet challenge. One photo to represent each letter of the alphabet.

If you're interested in my article and photos from it you can check it out here:
https://kieranstone.com/alphabet-photography-challenge

Disposable cameras are fun although it does seem wasteful and you don't ever get to see your pictures. If it's an important event that you want to remember I recommend using a real camera.

I don't need to watch the video to agree with the subject. Before making photography my career, I was in Japan and used a couple Fuji disposable cameras and loved them. My favorite shot was from a trip to Mt. Fuji which I'll attach below. 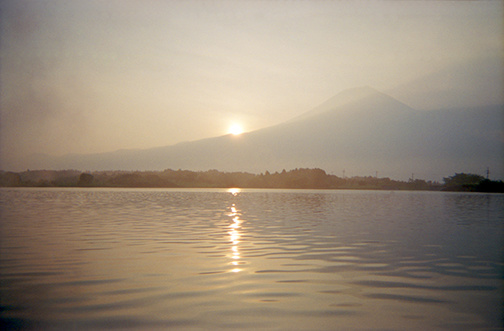