Pete Souza has one of the best jobs in the world, as well as one of the most demanding. It's enlightening to see what gear the man charged with documenting every aspect of the president's life carries.

I won't lie; I did a tiny cheer when I saw that Souza is a Canon guy. I have no doubt he could create a great shot using a Canon, Nikon, Sony, Fuji, pinhole, etc., but it's still fun to see we're rocking the same gear. On a more serious note, though, I think his gear bag is a great lesson in paring down to the essentials and focusing on taking the shots. After all, he needs to be mobile and ready at all times. His gear bag reminds me very much of a minimalistic wedding photographer's setup. 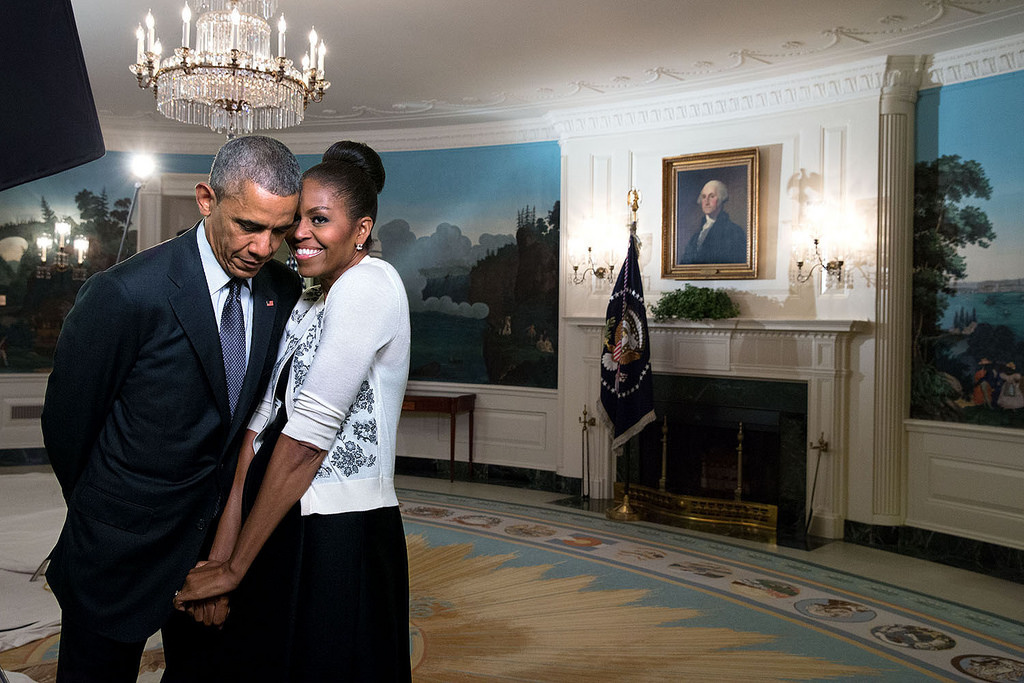 This is still one the best all-around cameras on the market and a favorite of many professionals. Souza carries two of them. Their very quiet shutter, decent frame rate, stellar AF, and good high ISO performance make them versatile in just about any situation.

I imagine that this lens lives on his camera the majority of time, particularly at events where the president is moving around. Its fast aperture (for a zoom), combined with its useful focal range makes it a documentary photography favorite.

We're fans of this lens. It's quick, sharp, and its autofocus is dead-on. And yes, it's better than the Sigma Art.

Though it's older, it's still one of Canon's best lenses. It draws beautifully, has fast AF, and has a wide aperture, making it a great portrait or long-distance lens.

When not working, Souza turns to the Fuji X100S. It's also my personal favorite; it's just a fun camera to shoot with. Its compact size and great image quality make it a perfect carry-everywhere camera.

I'm not surprised by Souza's kit; it's essentially a modified version of the "holy trinity" (35mm, 85mm, 135mm). By throwing the zoom in the middle, he gets a bit more versatility, while still having the light-gathering ability and optical quality of primes near the ends. It's also a great example of sticking with the bare essentials and focusing on getting great shots.

I'd also like to know more about the the lighting he's using. Speedlites, Profoto, pocket Wizards, etc...

The silent shutter on the 5D3 is quite good compared to most DSLRs.

Totally. I love the quiet shutter setting on my 5DIII, and it's actually a serious consideration for me when switching to another camera in the future. Would love me some 1DX action but the shutter is so dang loud. I shoot in many locations/settings where a quiet shutter is a must.

I'm shooting the 1DX II now and can vouch that its silent shutter is *very* good.

I haven't had a chance to listen to it yet. The 1DX (Mk1) was every bit as loud as the normal shutter sound, except that you could choose when to actuate the second part of the sound (the mirror dropping back into place I guess).

Yeah, the 1DX is anything but quiet, but it's markedly improved on the Mk II. I'll see if I can do a side-by-side with the 5D3.

I would have assumed he went to mirrorless for the completely silent electronic shutter. Looks like some of these dslrs can get close enough to silent for his kind of work.

Or maybe the president prefers to hear a camera click when he's being photographed.

Could be battery life too. I imagine he's on his feet for quite some time.

That's a good point. If you want a camera that keeps on working all day, you get a dslr, not a mirrorless one.

Gear ... doesn't matter, not important. For me it would be far more enlightening to find out more about *how* he works. I want to know how Souza works, behaves, how he gets the shots he wants, how he keeps out of the way.

Nat Geo did a documentary on Pete Souza:
Part1: https://www.youtube.com/watch?v=Qx6vcQdoaf0

Thanks for sharing the videos from Nat Geo. I enjoyed watching the series.

Thank you for sharing this link. Perfect viewing for a rainy July 4th.

At lease I know that I have the camera body that has shot the president. Do I have Pete's lenses? No. Do I want another 5D III body? Yes. But if I had a choice for another camera body and had the funds, I'd get the 1Dx II. I may have owned the camera body used for Carter, Reagan, Bush, or Clinton: Canon New F-1.

He switched to that for only a brief time.

I've followed Pete Souza for a few years now, i've noticed he lives at slow shutter speeds and the lowest possible ISO's.....i.e. He doesn't shoot unnecessarily high shutter speeds, just b/c he can shoot higher ISO's than in years past. I rarely see his shutter speeds over 1/200s......it's almost like he shoots auto ISO in manual mode...he picks the shutter speed and aperture, and lets the camera pick the iso...I've adopted this a little in my own shooting since seeing how he shoots.....keep the SS at 1/100 or so, and keep the lowest possible iso....works well