What Is the Best APS-C Camera Available Today? Canon vs Nikon vs Sony vs Fujifilm

If you were to compare the best APS-C cameras made by each of the big four manufacturers, which would come out on top? This useful video digs through the specifications and performance to help you find out.

Chris Niccolls and Jordan Drake of DPReview TV have done an in-depth comparison of the Canon M6 II, Sony a6600, Fujifilm X-T4, and Nikon Z 50 to help anyone pondering a purchase. All of these are superbly capable cameras, each with its advantages and disadvantages. For example, the Sony a6600 might have two displays that perform the worst, but this is also part of why its battery life is vastly superior to the other three cameras.

Lens choice is perhaps another area to take into consideration when making a decision, with Sony having a vast array of options available at a wide range of prices, sizes, and levels of performance. This is helped massively by the number of third-party manufacturers, such as Sigma, Tamron, and Samyang, and while many aren’t designed specifically for APS-C sensors, something like the Samyang AF 35mm f/2.8 (currently discounted by $180 to $219) is an affordable, compact prime that won’t feel out of place on the a6600, even though it’s made with full frame cameras in mind.

Which would be your choice? Let us know in the comments below. 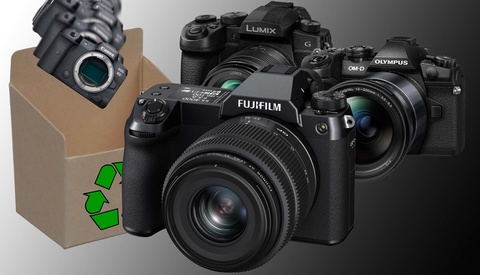 Gear / January 2, 2022
Why You Should Consider Abandoning Full Frame and APS-C and Go for Something More Extreme
Log in or register to post comments
15 Comments

I went with the Sony, but the a6400 instead of the a6600. As a novice, it took some getting used to, but now I am familiar with Sony ergonomics. The variety of lenses available (including being able to use FE lenses) is a big plus as well. I would purchase again, in fact I hope they do update the a6600 with a higher megapixel sensor, flip out (not up) screen, and active image stabilization (and S-cinetone too please?)... yeah shut up and take my money Sony.

That way, the weak corners are already cropped, and you only get the sweet dspot of the lens

I'd go with a Nikon D500 and I'm a Canon shooter. I know it's not on the list, but IMHO, it's better than any of these listed.

That video was a fantastic way of igniting loads of arguments, that's about it.

-Full Frame Trolls who can't stand the thought of people using other systems
-M43 users angry their systems weren't included in this 'APS-C' comparison
-Non Fuji users angry that the X-T4 won
-The Nikon is dying trolls who have been telling the world Nikon are dead for about 5 years
-People who have never used Fuji telling everyone you can't use Auto Focus, or edit in LR, or shoot trees... Refer to the first group as the main culprits of this
-Sony ergonomics and colours are bad trolls

im sure I've missed a few but you get the idea.

And the Canon M6 II shouldn't even be in there. It's barely a system and probably a dead man walking at that.

Right , Pentax is huge in the apsc market. It’s a dslr and they don’t exist anymore. Like one Canon shooter said Nikon d500. I have that and my company has the Sony a6400 . The d500s are used way before considering the dinky a6400 . You cannot even hold it to shoot with it in a professional setting. We bought it for a small out of the way video camera tucked next to the stage .

I would, and I think every Nikon user would, go for the Nikon, whatever weekness it may have compared with the compatitors. Just because of the fact you van still use ( some) of your old lenses and other stuff.
But why couldn't they five it a better look, it's spook ugly

This new 'retro' one might be an option for me, if they make an FTZ adapter that doesn't look terrible it could be great for the legendary 35mm DX lens I have sat upstairs not being used.

I started out with an A6000, from there I decided to go to the A6600. Aside from being incredibly annoyed by 8-bit color depth in videos, I find it to be pretty stellar overall. I truly wish Sony would update existing camera firmware instead of releasing new ones every week. I've added in an A7S III recently to address my interest in video options that the A6600 just can't do. If I had to do this journey again I'd probably have decided to go with Fuji.

I have not shot with these cameras but from what I have read the D500 ( which I own) will outperform these when it comes to action. The keeper rate is high on the d500 due to the full frame autofocus points and the crop sensor. This should allow it compete on actual keepers as opposed to frames per second. Also, see the piece on price per shutter actuation in Fstoppers today. All this must be balanced against the risks of building a system around an apsc dslr in 2021. I must say that the IQ, with some exposure comp dialed in , on the d500 is really good.

My Leica CL has served me pretty well. Think I'll stick with that

The company specialising in APS-C winning, as they should. Really makes sense.

it's not a power-flash
but it's great for fill-in

the xs-10 is a "beginners' or enthusiast's camera. \
The other 2 have pretensions of being "professional"